The Upper Grand District School Board is predicting student enrolment will increase in the next five years. (Screenshot from May 10 meeting)

GUELPH – Officials at the Upper Grand District School Board (UGDSB) are predicting student enrolment will increase in the next five years, according to the board’s long-term accommodation plan (LTAP).

During a May 10 business operations committee meeting, the board’s manager of planning Ruchika Angrish relayed the board’s considerations in the LTAP five-year review which included a previous board motion on the feasibility study of an international baccalaureate program for Dufferin County and Wellington County.

Among the considerations was also a Centre Wellington elementary school – approved in November by the Ministry of Education – boundary review as part of the board’s capital priority requests.

The boundary review will be reviewed in the five-year comprehensive review in terms of the timing of the capital request, Angrish noted.

“School enrolments always fluctuate due to a number of reasons such as changes in the residential developments, changes in participation rates and retention and boards decisions about boundary reviews or grade or program changes.” 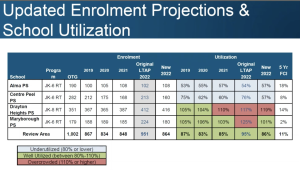 The report presented to trustees noted the total elementary enrolment including both in-person and remote learning in 2021-22 was 24,172 students.

“This is approximately 550 more students or an enrolment increase of approximately two per cent from last year,” Angrish explained.

In 2021-22 the total school utilization for the elementary panel was 93%, she added, noting that the report overall indicares that the space is well utilized across the board.

“The total elementary school capacity is just over 26,000 pupil places, so there are approximately 1,800 surplus elementary spaces across the jurisdiction, she explained.

“We are projecting that in the next five years there could be a shortfall of approximately 1,800 elementary spaces even with the construction of the new school in Centre Wellington.”

“According to our long-term forecast, we are projecting that there will be over 12,000 secondary students in the next five years,” Angrish told the board.

Based on the current projections, there are three elementary schools that meet the criteria for the 2020-21 school year based on either utilization or space parameters, which included Alma Public School and Ross R. MacKay Public School in Erin.

These are the same schools that met the criteria in last year’s annual report, Angrish noted.

“In the secondary panel, Norwell District Secondary School also met the criteria on the basis that it had 200-plus pupil spaces of excess capacity for the last several years,” she said.

“When I look at some of our schools, ever since I’ve been a trustee there are certain schools like Kenilworth and Arthur and potentially even Alma [which] continually show in the blue field,” trustee Barbara Lustgarten Evoy responded.

“And it occurs to me that as we are approaching this very exciting reimagine. I would hope that there will be conversations that will include finding ways to get nearby students – relatively speaking geographically – nearby students there,” she added.

“It’s logic, if we’re bulging at the seams here and we’re missing kids here I hope that we will get creative in finding ways or at least having discussions about finding ways to put some of the schools together to maybe fill up some of those spaces.”