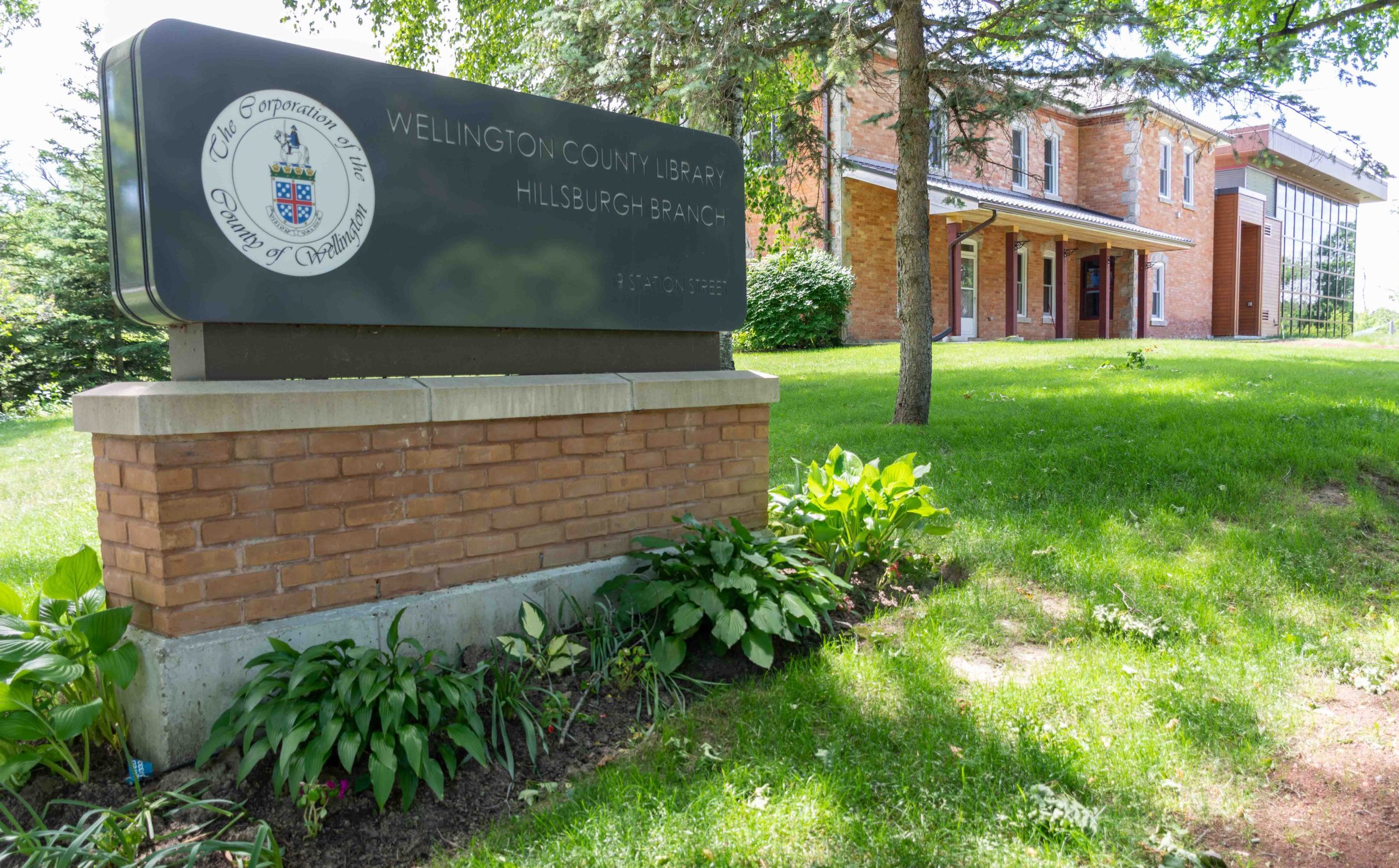 The recent discovery of turtle egg nests on the property of the Hillsburgh library branch has prompted concerns from residents. The county has opted to take a hands-off approach and allow a volunteer with the Rare Charitable Research Reserve’s turtle program to place protectors over the nests. Photo by Jordan Snobelen

ABOYNE – There was much to do about turtles and not much to do with books at the county’s June 8 Library Board meeting.

Last year, some Erin residents voiced concern about snapping turtles navigating the newly constructed Hillsburgh bridge and dam, suggesting the reptiles were being trapped in the dam and separated from migration paths and nesting grounds.

But more concerns have since been raised – this time about turtle nests at the nearby Hillsburgh library branch.

“While citizens of Hillsburgh want to save the turtles, it [is] falling on library staff to hear their complaints and concerns and there is an expectation that somehow they should have the answers and be able to do something about this,” chief librarian Rebecca Hine said at the board meeting.

Hine’s remarks were the segue into an hour-long discussion revolving around the reptiles, including an impromptu closed session, where the public, including reporters, are not privy to what is being said.

During the public portion, Hine spoke about a volunteer with the Cambridge-based Rare Charitable Research Reserve turtle program, who came to the library property after receiving a report about turtle eggs.

The volunteer proposed relocating the eggs from the property, but Hine, contacted by the branch and feeling she didn’t have the authority or knowledge to address such matters, told staff “we need to slow down here.”

A compromise was met, and a wooden and mesh nest protector was placed over the eggs to prevent them from being stepped on and crushed. 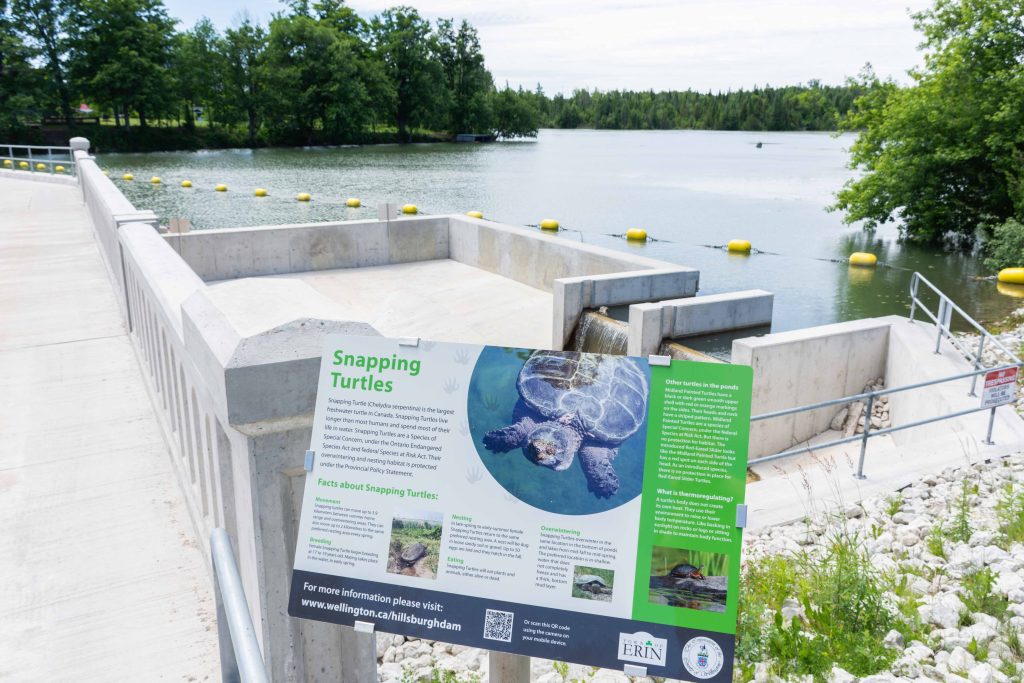 A sign displayed at the Hillsburgh Dam in Erin. Photo by Jordan Snobelen

Councillor Diane Ballantyne asked what was being done now to protect turtle eggs on the library branch property.

“We’re allowing nature to take some of its course,” said library board chair and councillor Mary Lloyd.

CAO Scott Wilson added, “With respect to the turtles specifically, Rebecca and her staff should be doing nothing.”

He continued, “If those turtles make it, they make it, but we’re not placing turtle nests, we’re not moving turtles along – we’re letting nature take its course.”

Wilson then softened and said staff will “spend as much time protecting turtles as council directs” but are currently taking a “passive view.”

Lloyd presented a motion asking the board to support whatever county staff end up doing, or not doing, regarding the turtles.

The purpose of the motion puzzled both Ballantyne and Warden Kelly Linton.

Staff already know they’re supported, Linton said, and the public wouldn’t care about a procedural item saying as much.

“Our staff can be directed: turtles are off limits … we’re not talking to you about turtles, unless it’s the chocolate ones,” Linton said.

Board member Walter Trachsel said having a firm policy on the books that staff could point to would help.

Councillor Earl Campbell changed the meeting’s course, suggesting voting on the motion be deferred until after a closed session, suggested by the CAO.

“I’m kinda feeling like the other ball hasn’t dropped yet and there may be something more to this story,” Campbell said.

Following the closed session, support for Lloyd’s motion had been withdrawn and Lloyd said there was nothing further to disclose.

The Advertiser followed up with Wilson to inquire about further direction to library staff.

The Ontario Turtle Conservation Centre and the Rare Charitable Research Reserve have since been contacted by Hine, and branch staff have been instructed by the CAO and Hine to refer citizens to the county’s Hillsburgh dam webpage if turtles are broached further.

If anyone comes across an injured turtle, they can reach the Ontario Turtle Conservation Centre by calling 705-741-5000, and if there’s a nest in a high-risk area, it can be reported by calling Rare’s “turtle hotline” at 226-962-6885.

“We have been in contact with both organizations and confirmed that this is the best procedure to report injuries and nests, and they have staff that know how to deal with it,” Hine stated in an email.

Later reached by phone, Sandy Snickles, a Rare volunteer, said she came to the library property on June 2 and discovered two nests, one with Midland painted turtle eggs located along a walking pathway near the branch’s entrance, and another with snapping turtle eggs.

“I assessed it, I gave them my recommendations … that those nests should be removed and they denied that, so I did the only other thing I could do and that’s cover them and ask them to monitor the eggs,” she explained.

Snickles has removed around 700 turtle eggs from precarious locations since 2020, when she was added to a permit issued by the Ministry of Northern Development, Mines, Natural Resources and Forestry.

Once eggs are extracted, she explained, they’re incubated at Rare, and released into shallow water with plenty of cover within 100 metres of where they were found.

This recent experience, she said, has been the most bizarre of any.

“I really am concerned about those turtles, but what are you going to do … you can’t just go on there and say ‘we’re going to do whatever we want to do,’” Snickles said.

“At this point, it’s going to be up to volunteers in the community to get involved, monitor the nest, and ensure the hatchlings get to the wetland.” 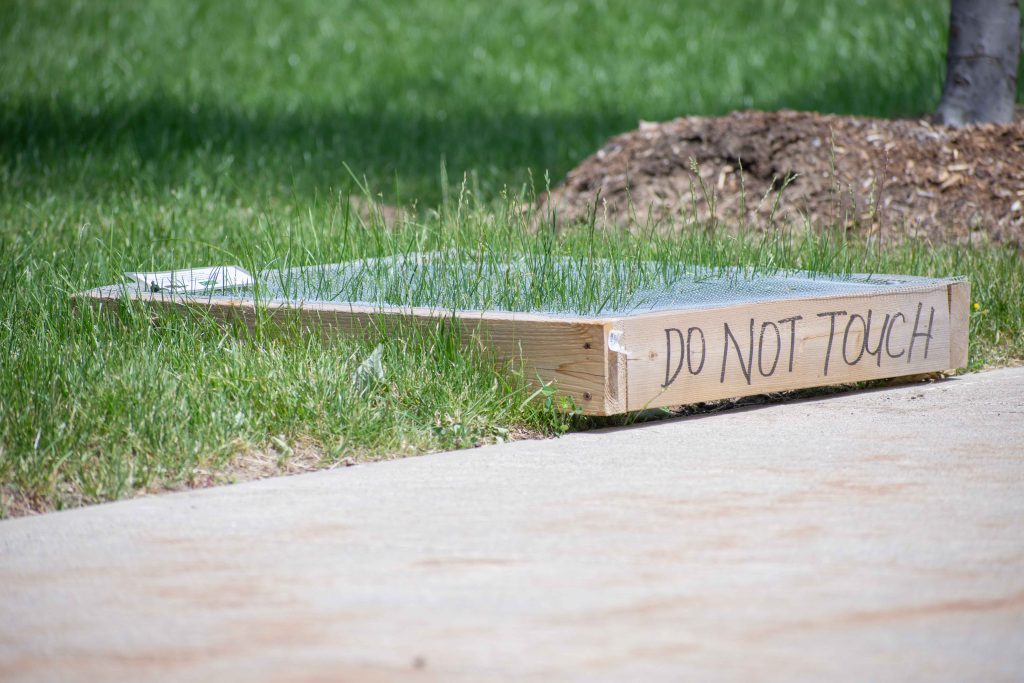 A wood and mesh box is seen placed over a midland painted turtle egg nest along a pathway at the Hillsburgh library branch in Erin. Photo by Jordan Snobelen

Alissa Fraser, a Rare conservation technician and the woman who started the turtle program, said its purpose is to “up the odds” of survival for turtle hatchlings.

“Because if we don’t, there’s nothing coming up to replace those adults we’re losing,” she said by phone.

Turtles clean waterways by slurping up dead, opportunistic food, and provide a good meal for a number of predators higher up on the food chain.

But to sustain the turtle population, older, adult turtles – which Fraser says are being killed at an “alarming rate” due to roads and development – are needed.

“The older they get, the more eggs they lay; the bigger the eggs which means higher survivorship for those hatchlings,” she explained.

Being a good food source, few hatchlings make it to adulthood, meaning mature adults are only replaced every few decades.

The Rare turtle program was started by Fraser in 2017, following approval by animal care committees at Rare and the province, which issued a collection and incubation permit to Fraser – and by extension to volunteers like Snickles – for 2,000 eggs.

Volunteer monitors are relied upon to watch over nests and alert Rare of changes, but once hatchlings are on their way, it’s largely up to the willing, or Mother Nature’s divine intervention, to direct them to water.

“We’re mostly looking at whether or not the eggs themselves are in danger from human impacts,” Fraser said.

Although staff and volunteers are trained to remove eggs at any stage of development, incubators at Rare are now at capacity for the season.

Nest protectors currently in place at the Hillsburgh library branch property will be left until the eggs hatch, Fraser said.

For snapping turtles, that will be between August and October, and for overwintering painted midlands, they won’t emerge until spring.