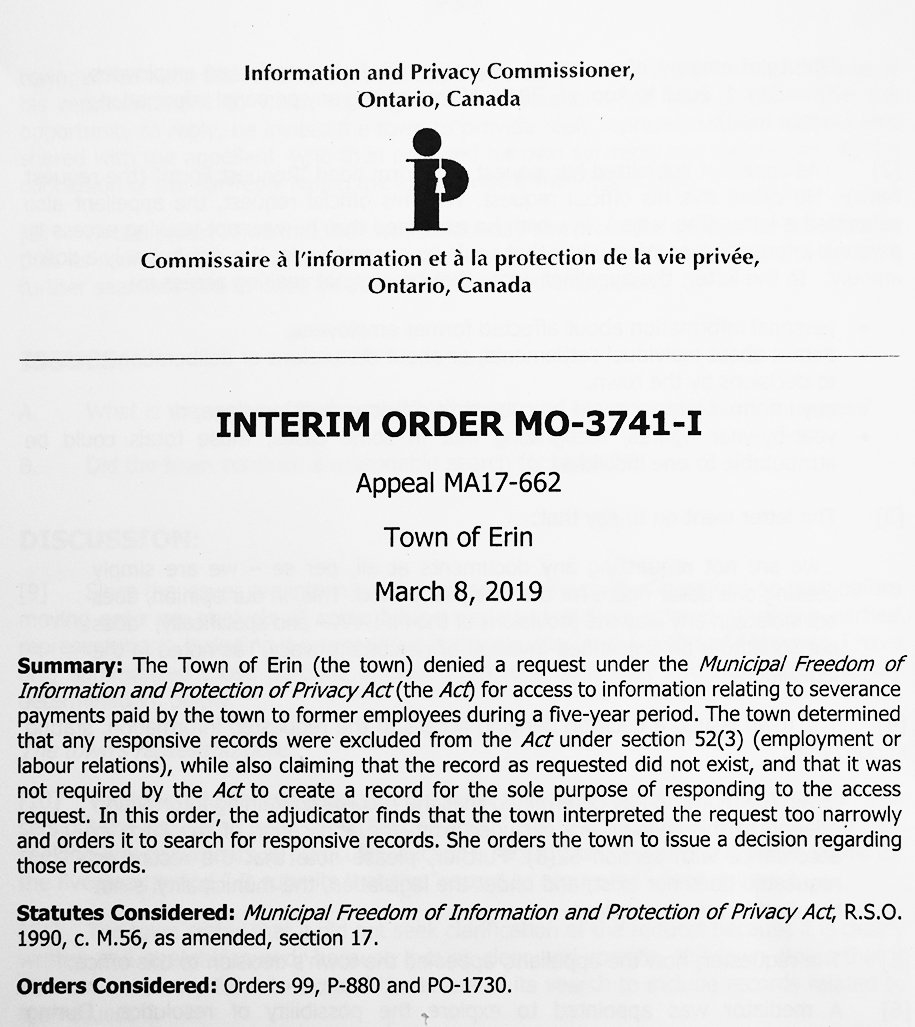 ERIN – The Information and Privacy Commissioner (IPC) of Ontario is not satisfied with Erin’s “narrow interpretation” of a freedom of information (FOI) request for severances paid to terminated employees and has ordered the town to search for related records.

“I find the town has failed to conduct a reasonable search,” states the March 8 decision by IPC adjudicator Jessica Kowalski.

The interim order is related to an Advertiser request to the town, dated Oct. 13, 2017, seeking the total amount of severances paid to terminated employees from 2012 to 2017.

Erin was the only one of eight municipalities in Wellington, including the county, that refused to provide the information. The newspaper appealed Erin’s decision to the IPC.

The town’s IPC submissions, filed by Jody Johnson of the Bay Street law firm Aird and Berlis, argue the record sought by the newspaper does not exist and the town is not required to create a record.

The IPC decision issued last week finds the town “narrowed” the newspaper’s request by searching “for a single, existing record containing the specific number sought [by the newspaper].”

The Advertiser has maintained town officials knew, or should have known, that fulfilling the FOI request would require a search for several records/documents.

The IPC noted, “By interpreting the request as it did, the town, whose staff know where and how its financial information and information relating to its expenditures is stored, unilaterally narrowed the scope of the request.

“By redefining the request as it did, its decision … resulted in a complete denial of access to the information sought by the [newspaper].”

Furthermore, the IPC states that if there “was any ambiguity” about the FOI request, the town is required “to work with the requester to reformulate the request, if necessary, and not to narrow it unilaterally.”

The IPC also notes the town’s search for “responsive” records, as explained in an affidavit from town deputy clerk Lisa Campion, was confined to payroll and human resources records.

“I find the town has not met its search obligations under the [Municipal Freedom of Information and Protection of Privacy Act] and I order it to conduct further searches for any records in its custody or under its control that might be responsive to the request,” states the IPC order.

The Advertiser has maintained Campion’s affidavit is deficient in establishing the scope of the town’s intitial record search, as Campion was not part of the search and her affidavit lacks details such as dates and the types of files searched.

The IPC order requires the town to provide a sworn affidavit from the individual(s) who conduct the ordered searches (including the date, nature and results of searches) and to provide a decision letter to the newspaper if responsive records are located.

If records have been destroyed, the town must explain when that happened, as well its policies/practices for record retention.

The IPC has not ordered the town to create a record to fulfill the newspaper’s FOI request, but it will consider whether the creation is warranted pending the outcome of further town searches.

The town has 30 days to respond to the IPC order.

Erin Mayor Allan Alls has told the media the town will not provide the severance information sought by the newspaper unless forced to by the IPC.