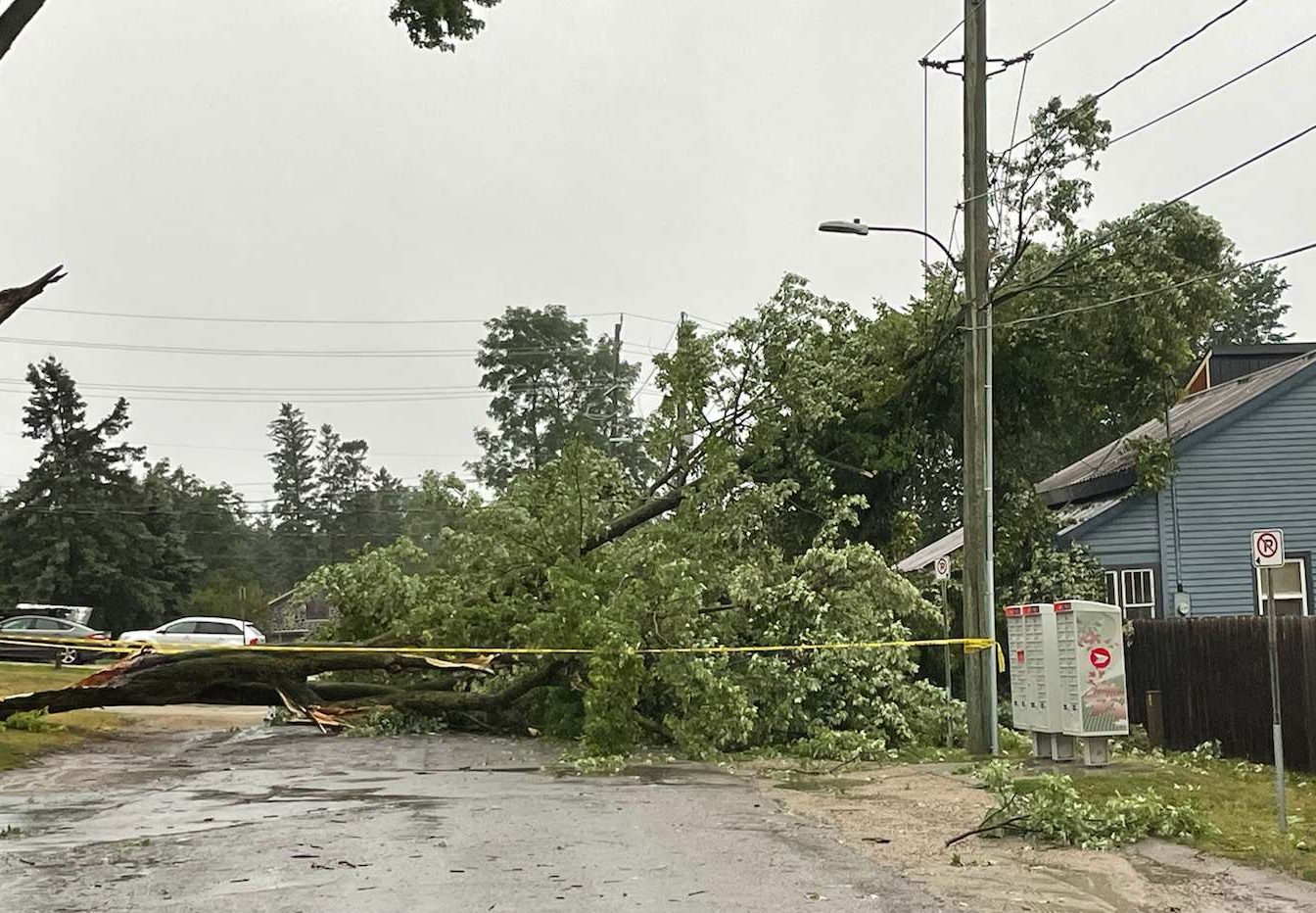 This tree on Carlton Place in Elora was downed by the Aug. 3 storm and fell onto nearby power lines. Photos by Kelly Waterhouse

ELORA – Thousands of people were left without power and with a significant cleanup after a major storm swept through the region on Wednesday night.

Several had homes and vehicles damaged due to falling trees and for some the power outage dragged well into Thursday.

Both were later downgraded to severe thunderstorm warnings and the Weather Network’s Mark Robinson indicated there’s little evidence of a tornado in Elora, which appeared to be hardest hit by the storm. 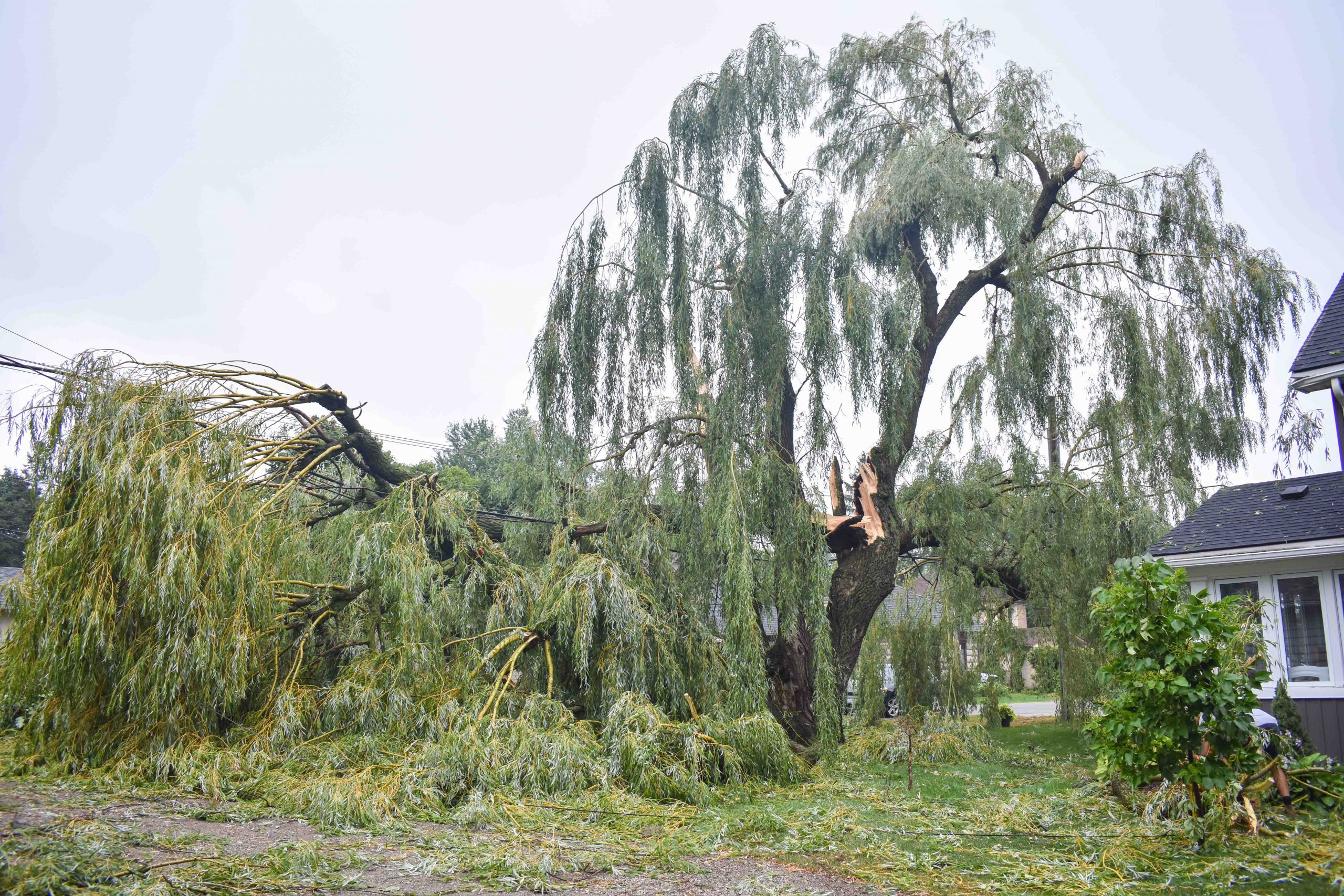 This tree on McNab Street in Elora had significant damage after the storm on Aug. 3. Photo by Kelly Waterhouse

“It’s tricky. We’ll hear from the Northern Tornadoes Project about whether this was a tornado or a downburst,” the meteorologist and storm hunter told the Advertiser in Elora on Thursday morning.

Robinson likened a downspout to dumping a bucket of water – “except you’re dealing with air and when it hits the ground, you can get as much as 120 to 130km/h winds when it strikes the ground.

“And as the storm is moving along, you’ll actually have those winds pushing ahead and along underneath the storm.”

On Aug. 4, the Northern Tornadoes Project (NTP) and Environment Canada meteorologists confirmed, following a site visit, the storm was in fact an EF0 downburst and not a tornado.

On social media the groups noted damage was “documented over an area at least 7km long and up to 2km wide” with “winds near 130km/h.” 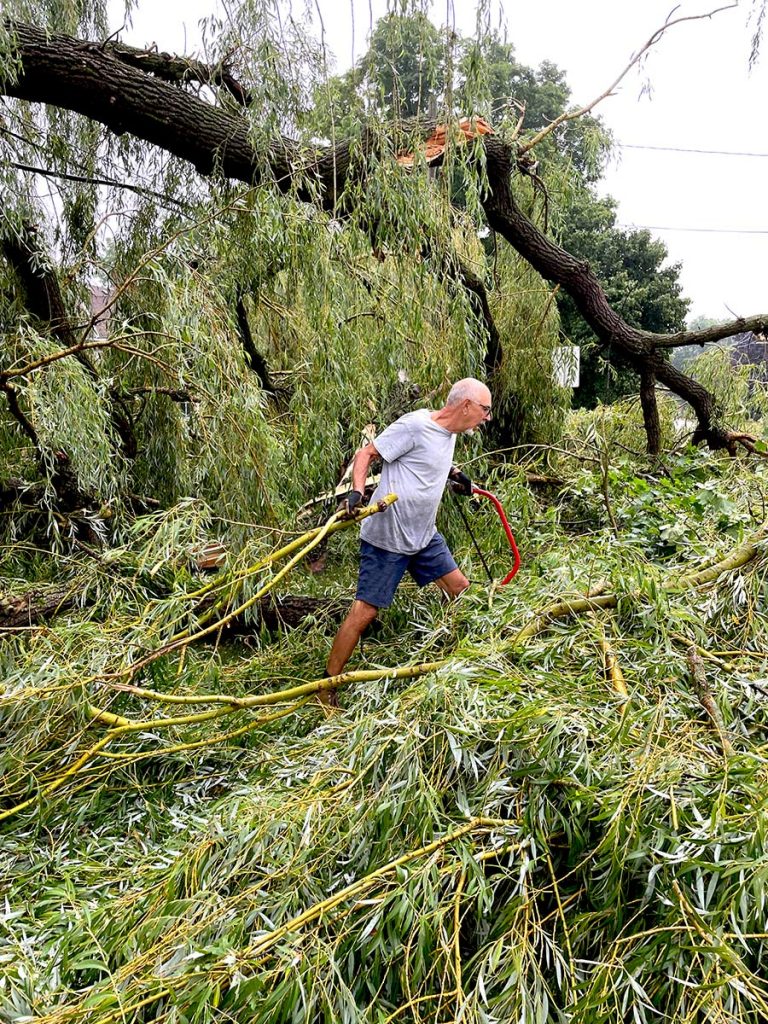 Homeowner Doug Clarke clears the damage of the tree located on the front of his property on McNab Street in Elora on Aug. 4, the morning after the storm. Photo by Kelly Waterhouse

Doug Clarke, who lives on McNab Street in Elora, was left with a major cleanup in his yard after a large tree was damaged by those strong winds.

“We believe it’s somewhere in the 60-to-70-year range,” said Clarke, who was not home at the time the tree was damaged.

While Clarke is upset by what happened to the tree, which he said actually belongs to Centre Wellington Township based on its location, he added he knows this is just nature taking its course. 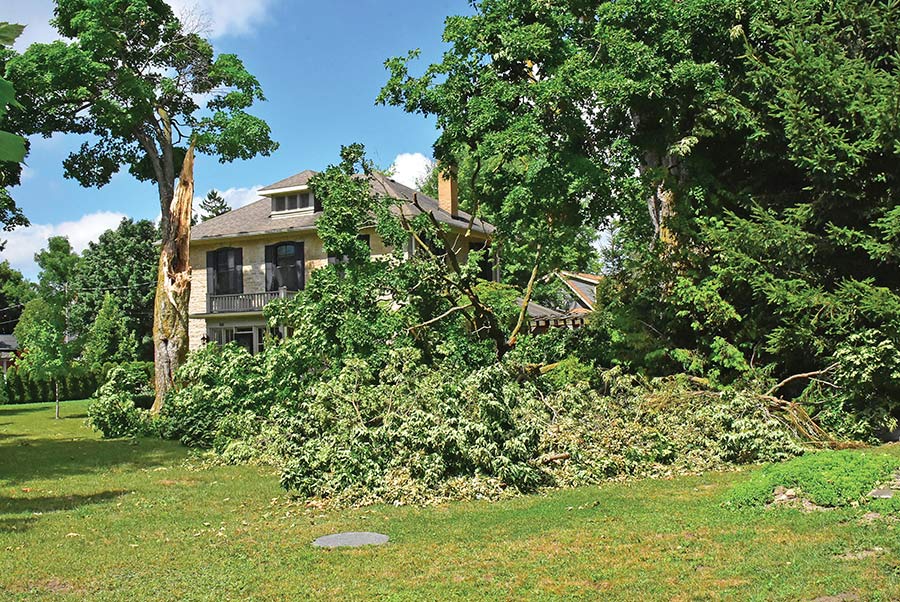 Storm damage – Thousands of people were left without power and with a significant cleanup after a major storm swept through the region on the night of Aug. 3. Several had homes and vehicles damaged due to falling trees and for some the power outage dragged well into the following day. Some very large trees and limbs came down including this very old tree in the yard of a house very close to Knox Presbyterian church in Elora. Photo by Bill Longshaw

The Grand River Conservation Authority (GRCA) announced at 9pm on Wednesday night the Elora Gorge Conservation Area would be closed “until further notice” due to “significant damage to trees.”

Anyone with camping or tubing reservations for the remainder of the week will be contacted regarding their bookings, officials said.

“All other [GRCA conservation areas], trails and natural areas remain open; however, the public is asked to exercise caution and avoid any areas where tree damage has occurred,” stated the press release.

On Aug. 5 Centre Wellington issued a press release stating the township had cleaned up and reopened all roads, and would now “focus our efforts on assisting residents with storm debris on boulevards and shoulders.”

The cleanup will begin on Aug. 8 on the south side of the river, “focussing on where majority of the damage occurred from the storm,” the release states.

From there staff will proceed through other areas of Elora, “stopping once on every street to support curbside clean-up.

“We ask that residents remain patient with staff, as it may take several weeks to pick up all storm related debris,” officials stated. 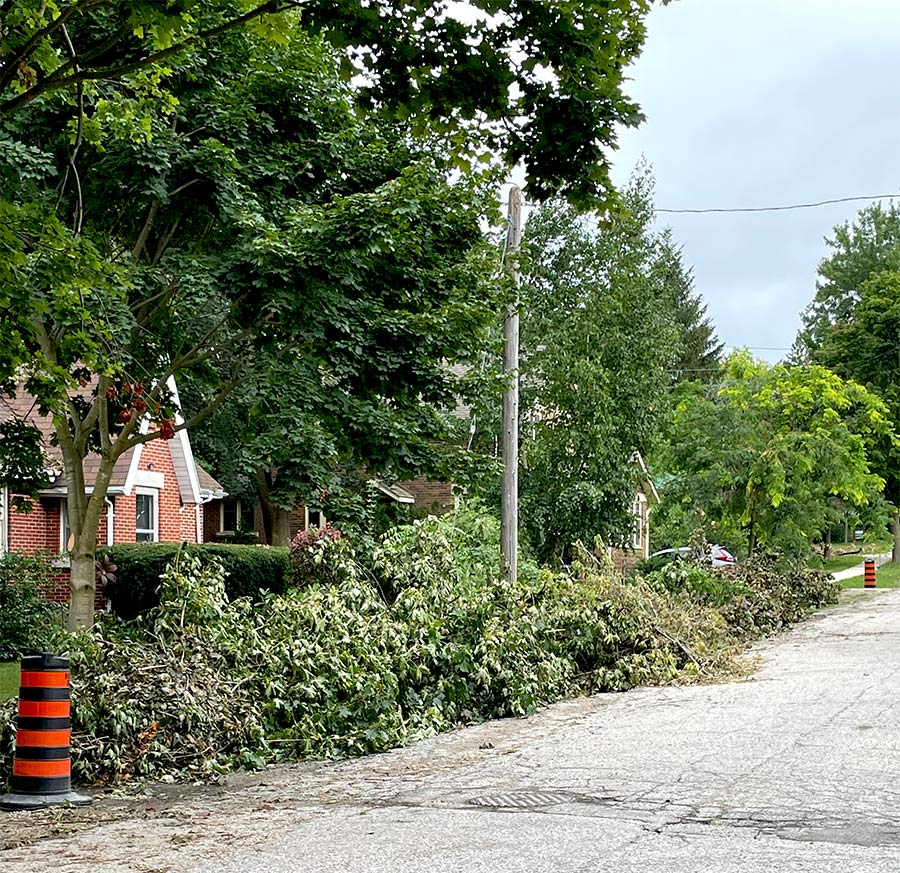 After the storm – Residents in Elora have lined the streets with tree debris left over from the Aug. 3 storm that hit the community. On Melville Street, brush is collected awaiting Township of Centre Wellington crews who began clearing neighbourhood brush on Aug. 8 on the south side of the Grand River, where the majority of damage occurred. Photo by Kelly Waterhouse

The township offered the following advice for those placing storm debris for burnside pickup: 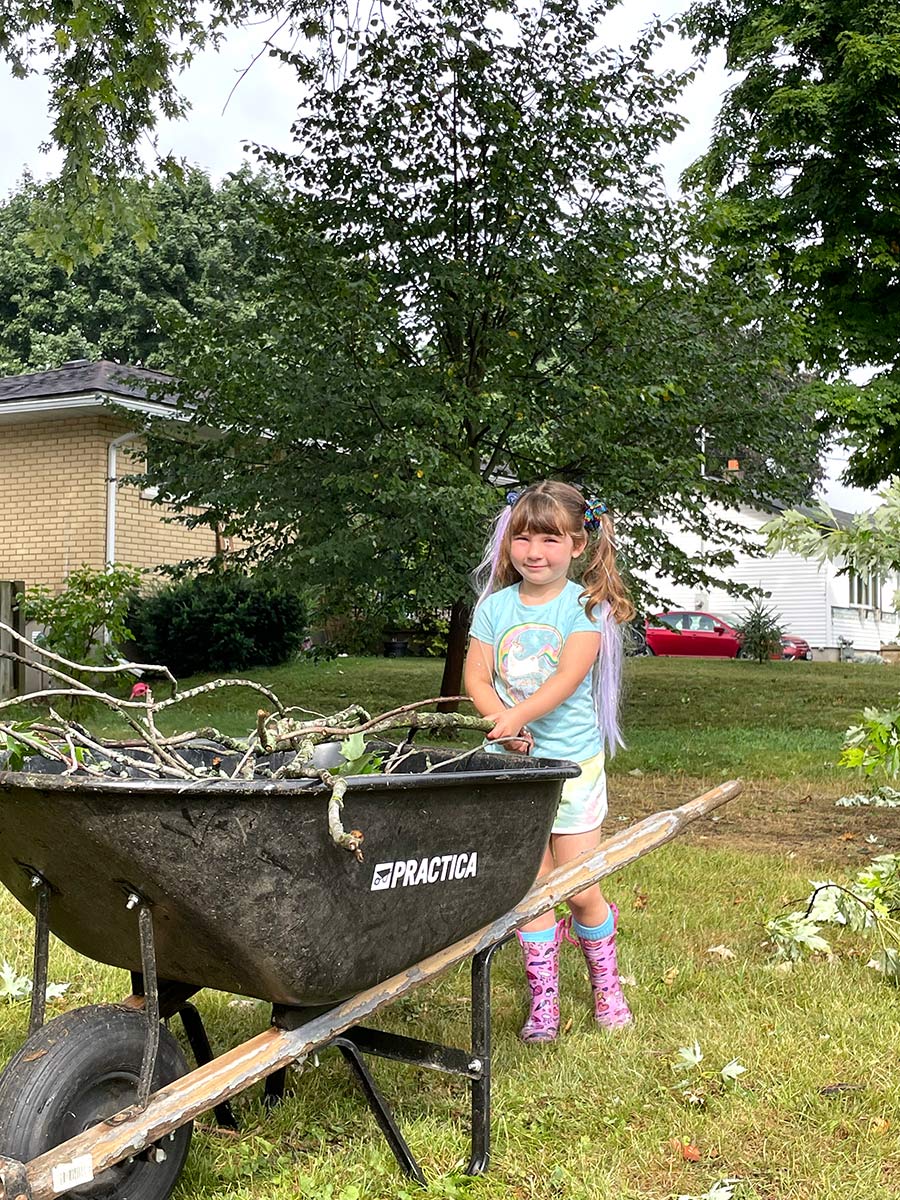 Four year-old Gracyn Soules of Elora helped clear debris in her grandmother’s Elora neighbourhood on Aug. 4. Her grandmother, Lisa Tavenor, said gathering twigs and branches for neighbours, some of whom were away at the time, is teaching Gracyn about gestures of kindness. But for this little helper, it helped to know there were treats to follow.
Photo by Kelly Waterhouse

“I cannot thank our public Works, infrastructure, Centre Wellington Fire Rescue Service and township staff enough for the dedication they have put forward over the last three days, and continue to do, to support our residents during the aftermath of the storm,” stated Mayor Linton.

“Thank you to everyone for pulling together and showing that we are part of an amazing community here in Centre Wellington.” 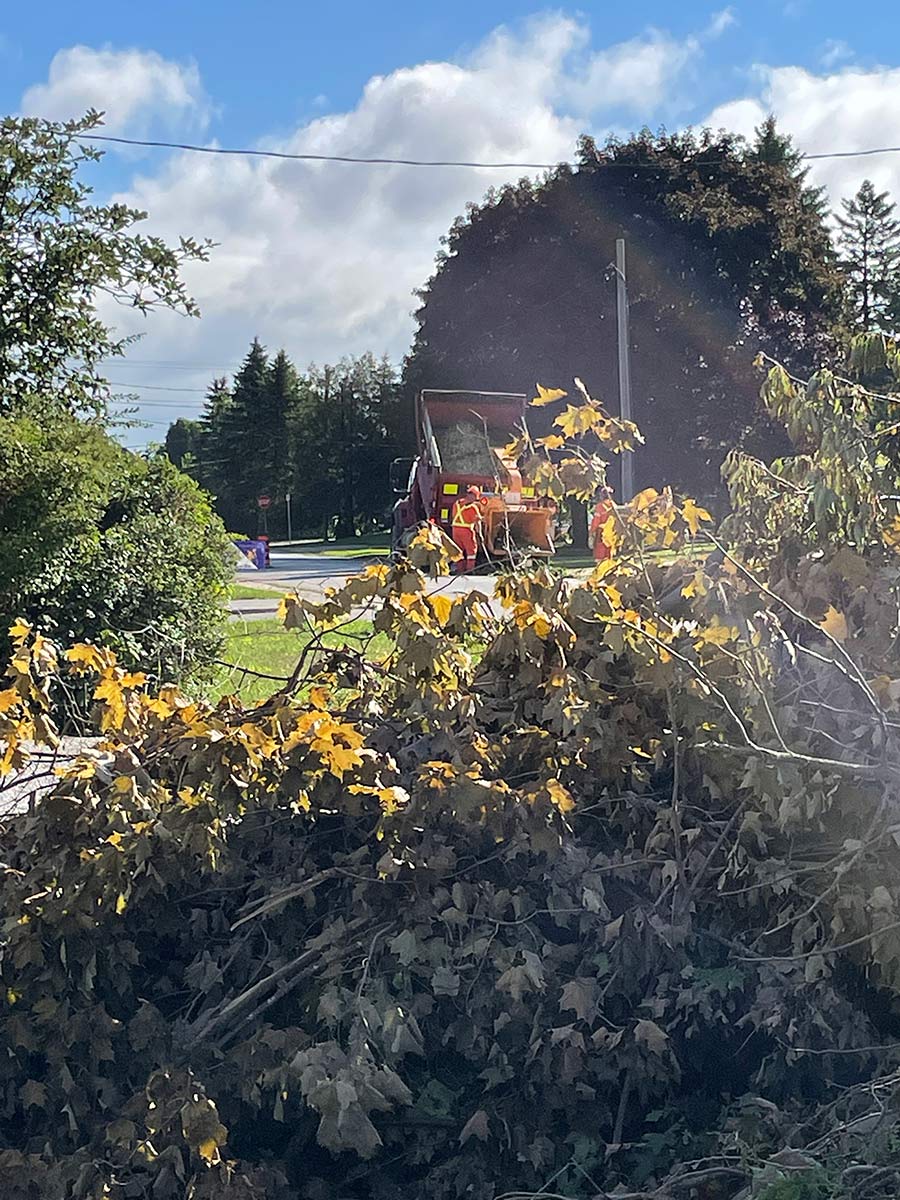 Clean up begins – Township of Centre Wellington crews were at work clearing tree debris from the Aug. 3 storm that impacted the community, beginning Aug. 8 on the south side of the Grand River, where the damage was most significant. On Tuesday morning, crews had cleared much of McNab Street. In a press release issued Aug. 5, township officials state crews will be stopping in Elora once on every street to support curbside clean-up, asking for the public’s patience as it may take several weeks to pick up all storm related debris.
Photo by Kelly Waterhouse

No charge for dropping off brush

On Thursday morning, as cleanup efforts were in full swing, Wellington County announced the county was waiving drop-off fees for “storm-related brush.”

Effective until the end of the day on Aug. 13, fees will be waived at waste facilities in Aberfoyle, Belwood, Harriston and Riverstown.

Residents are reminded branches must not exceed six feet in length.