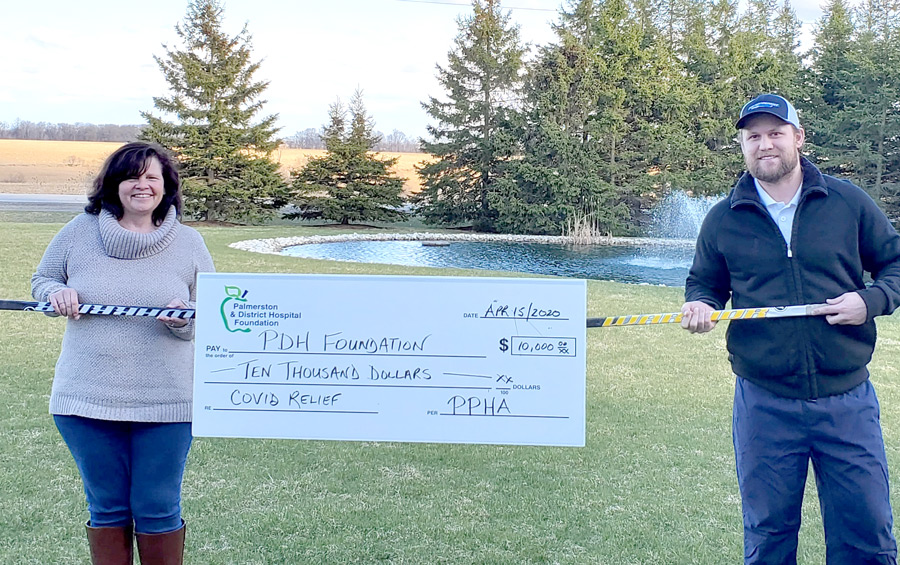 Former National Hockey League player Nick Spaling, a Drayton native, recently connected with Palmerston and District Hospital Foundation development officer Dale Franklin to offer support and a financial boost to the foundation. Hockey sticks provided the social distance, and the financial resources, for this $10,000 donation from Spaling’s Pro Performance Hockey Academy. Franklin noted the foundation will use the donation to support the extra resources needed to keep staff and patients safe during the COVID-19 pandemic. Submitted photo

PALMERSTON – The Palmerston and District Hospital Foundation has received a boost from a local hockey camp started by homegrown hockey stars Nick and Nathan Spaling.

Nick, who’s eight-year NHL career included stops in Nashville, Toronto and Pittsburgh, and Nathan, who played Junior A and starred at the Canadian university hockey level, started a late summer hockey camp in their hometown of Drayton in 2015.

The camp, known as Spaling Pro Performance Hockey Academy, recently made a $10,000 donation to the Palmerston and District Hospital Foundation.

Dale Franklin, foundation development officer, said the donation will be used to support extra resources needed to keep staff and patients safe through the COVID-19 pandemic.

“Obviously this is a time that’s tough for everyone, but especially the hospitals,” said Spaling in an April 21 telephone interview from his Waterloo home.

“So as they go through something like this it’s not easy for the nurses and doctors and everybody involved … we want to make sure we help out in any way we can to keep them safe in these times.”

Spaling retired from professional hockey after undergoing surgery for a wrist injury suffered while playing for Geneve Servette of the Swiss-A League during the 2017-18 season.

He noted the non-profit hockey camp is really a community venture.

In addition to the Spalings, another Drayton native, former NHL linesman Scott Cherrey, and Zach Graham, who played Junior B and NCAA hockey and now skates for the Minto 81’s, are involved with the non-profit hockey camp – as is the Spalings’ sister, Nicole.

“The whole family actually is kind of involved in it,” said Nick, who offered a thank you to the local community for their part in the camp’s success.

“Obviously through their support of the camp is how we are able to support local causes like this …” he said.

“It’s really a donation from the community.”