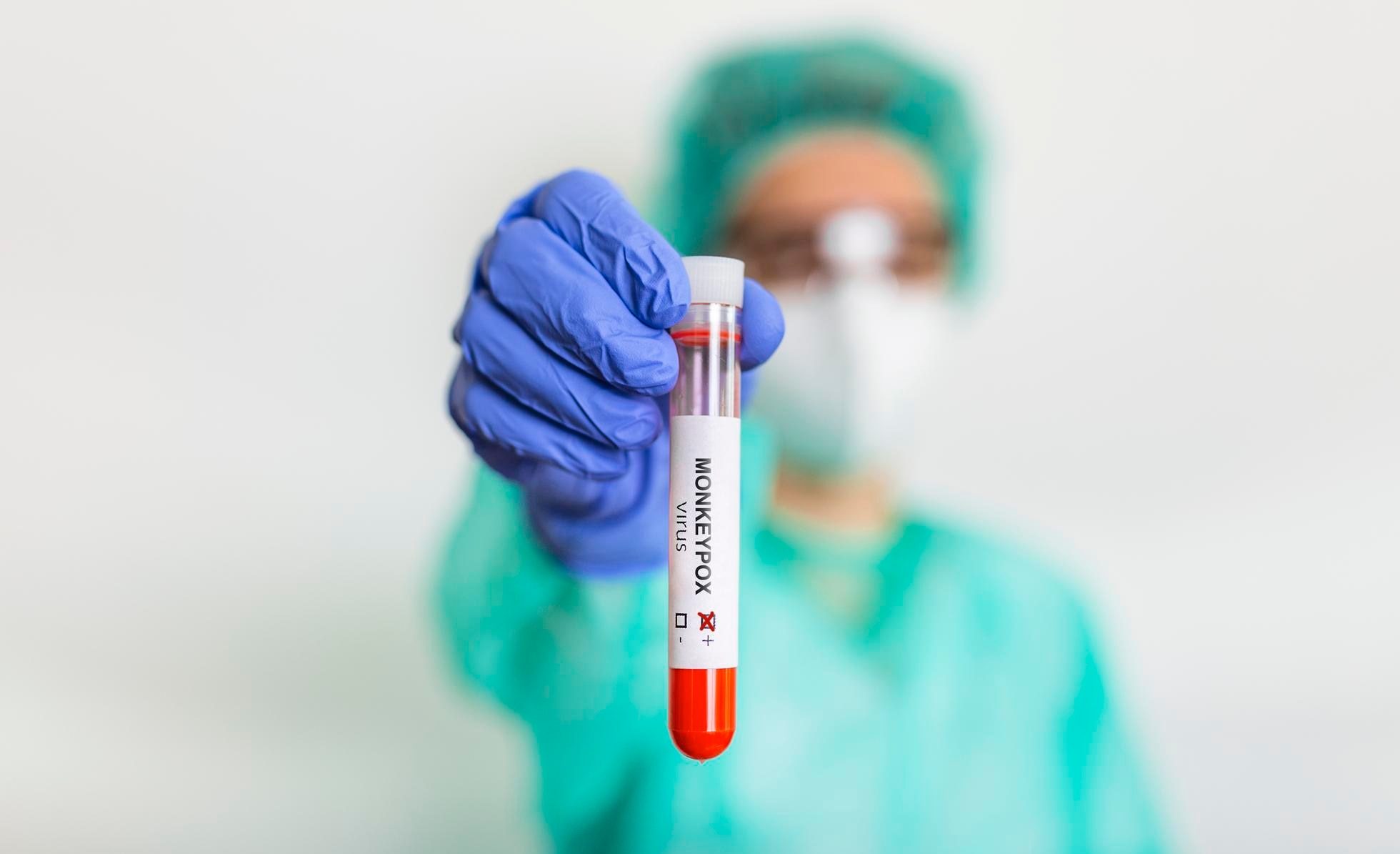 Wellington-Dufferin-Guelph Public Health has confirmed a second case of monkeypox in a county man between 50 and 60 years old, following a positive lab result, bringing the total number of monkeypox cases in the health unit's region to three. (Freepik stock image)

WELLINGTON COUNTY – There are now two confirmed monkeypox cases in Wellington County as of Aug. 5.

Wellington-Dufferin-Guelph Public Health (WDGPH) has confirmed a second case of monkeypox in a county man between 50 and 60 years old, following a positive lab result from Public Health Ontario.

The newest case brings the region-wide total in the health unit to three cases.

The other two cases, confirmed in June, involve a Guelph man between 20 and 30, and a man between 60 and 70 who was visiting the county and tested positive while here.

WDGPH associate medical officer of health Dr. Matthew Tenenbaum told the Advertiser the overall risk for the general public is “relatively low,” but didn’t provide justification for why that is, despite being asked.

Monkeypox is a zoonotic virus, meaning it can be transferred between animals and humans, and belongs to a family of other “pox” viruses including cowpox and the much deadlier smallpox — but not chickenpox.

The virus is known to spread between people through close contact with a person’s skin; bodily fluids; eyes, nose, and mouth (mucosal membranes); and contaminated objects such as sex toys, laundry, bed linens, utensils, dishes and cups.

Symptoms of the virus may include: fever, chills, headache, swollen lymph nodes, muscle aches, fatigue, and a rash or sores.

Health authorities are encouraging anyone who believes they may have monkeypox, or may have come in contact with a case, to self-isolate and contact a healthcare provider. Monitor for signs and symptoms for 21 days beginning the day of possible exposure.

Within the first five days an infected person may experience fever, headache, back pain, muscle aches and swollen lymph nodes.

Sores and/or a rash begin within one to three days following a fever. Rashes tend to appear on the face, hands, feet and/or genitals.

Pus-filled lesions — varying in quantity from a few to several thousand — eventually form, dry and fall off.

Should someone with symptoms be unable to avoid contact with others, it’s recommended rashes and sores be covered and masks be worn. Contact with positive persons should be not be made unless necessary.

Tenenbaum is encouraging those who are contacts to be open and thorough with the health unit to “ensure anyone exposed to the virus has access to treatment as quickly as possible.”

The health unit, with experience in contact tracing in sensitive circumstances, such as with cases involving STIs or HIV, is “rigorous” in protecting private information, he added.

Most monkeypox infections are mild and dissipate on their own, but some can be serious — specifically in newborns, children, pregnant persons and those with compromised immune systems.

Monkeypox can also be spread to a fetus during pregnancy, or to a child during birth.

Anyone — regardless of sexual orientation, gender or race — can get monkeypox. The virus is currently most prevalent among males having sexual contact with other males.

According to the World Health Organization (WHO), most people recover from monkeypox in two to four weeks and symptoms abate without treatment – though treatments are available.

Tecovirmat is an oral, antiviral medication for the treatment of monkeypox which slows the virus’ reproduction in the body, giving time for immune defences to build.

Provincial supply is limited and only available through Health Canada’s Special Access Program.

The Imvamune vaccine, though not a treatment, is also available.

Approved by Health Canada in 2013, and expanded for use in 2020 to include monkeypox, Imvamune is a third-generation smallpox vaccine and is used as a pre- or post-exposure prophylaxis via injection.

Those believed to be at risk of coming in contact with a case of monkeypox are recommended for the vaccine.

As of July 23, the federal government has distributed at least 70,000 doses across the country and locally 81 doses have been administered by WDGPH.

Since July 12, WDGPH has held vaccination clinics in partnership with ARCH Guelph which has provided a venue for the clinics and helped spread the word.

“We’ve been vaccinating approximately 15 to 20 individuals at each clinic, WDGPH spokesperson Danny Williamson stated in an email.

The health unit receives vaccine supply from the province on an “ongoing basis … based on what they are able to access from the federal National Emergency Strategic Stockpile,” Tenenbaum said.

He could not say how many doses are available to the health unit, but noted “the province has honoured all of our requests for doses to date.”

A first round of Imvamune clinics is scheduled until Aug. 16, with appointments being made through the WDGPH call centre (1-800-265-7293). Future clinics are expected.

According to Public Health Ontario, as of Aug. 4, there have been 449 confirmed monkeypox cases within Ontario.

Few cases to date (13 or 3%) have resulted in hospitalization across the province, and less than one per cent of infected persons have been admitted to an ICU.

No deaths in the province have been attributed to the virus.

According to the WHO, “in recent times” the fatality rate has ranged between 3 to 6%, and “historically” between zero and 11%.

Most Ontario cases (77%) have been reported by Toronto Public Health, and nearly all confirmed cases in the province have been confirmed in those identifying as males.

Two cases (less than one per cent) have been reported in those identifying as females.

The first two cases in Canada, in Quebec, were confirmed the night of May 19.

Cases have since been discovered in Ontario, Alberta, Saskatchewan, British Columbia and the Yukon; totalling 957 as of the afternoon on Aug. 5.

On July 23 the WHO declared monkeypox a “public health emergency of international concern” — in line with polio, ebola, and COVID-19, among others — and on Aug. 4, with at least 6,617 cases in the country, the U.S. declared the virus a national health emergency.

As of Aug. 4, according to Centres for Disease Control data, there were 26,864 cases confirmed in 88 countries world-wide.

Of those cases, 26,519 were present in 81 countries which do not normally experience monkeypox.

The virus occurs primarily around tropical rainforest areas of central and western Africa.

The United States, Spain, Germany, UK, France, Brazil, Netherlands, and Canada are currently experiencing the highest number of cases, ranging between 957 in Canada and 7,102 in the U.S., as of Aug 5. None of those countries have historically reported monkeypox.

According to the WHO, the first human case of monkeypox was identified in 1970 in a young boy in the Democratic Republic of Congo.

The first case outside of Africa was discovered in the United States, in 2003, and was linked to contact with infected pet prairie dogs which had been in contact with animals imported from Africa.

More recently, from 2018 to 2021, cases have been reported throughout Israel, the UK, Singapore and the U.S. In May this year, several countries where the virus normally wouldn’t appear began reporting cases.

Although the WHO notes monkeypox is less severe and contagious than smallpox, the organization also states the longest known successive person-to-person transmission chain has risen “in recent years” from six to nine links away from the original case — meaning more people are becoming infected from a single case.

“Studies are currently underway to further understand the epidemiology, sources of infection, and transmission patterns,” states the WHO.

“This is the first time that many monkeypox cases and clusters have been reported concurrently in non-endemic and endemic countries in widely disparate geographical areas.”