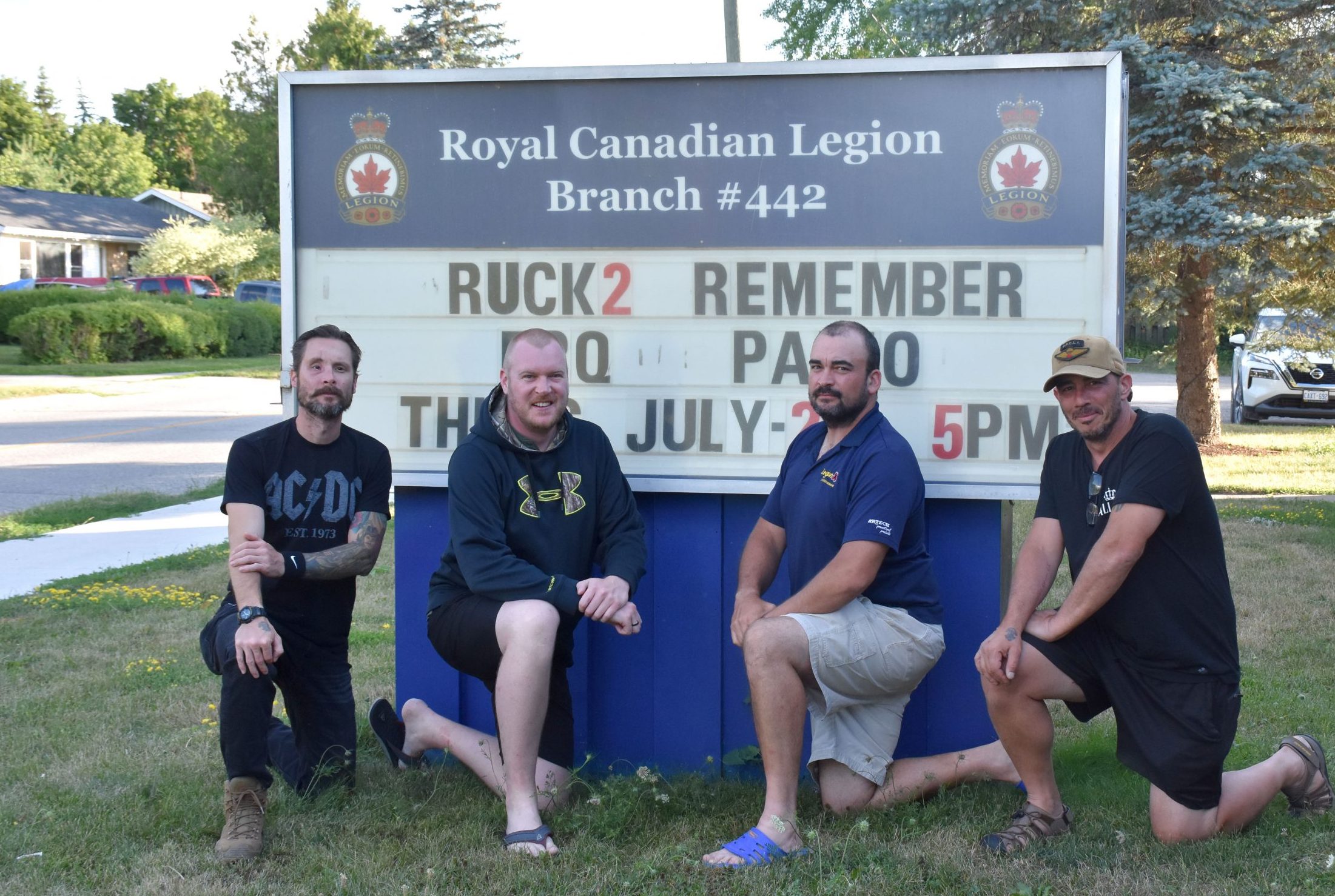 These four men are rucking the Bruce Trail in support of Operation: Leave the Streets Behind. From left: Dave Ward, Nathan Desborough, Lino Di Julio and Joey Dimauro. Photo by Paige Peacock

ERIN – After 22 days, 609km and several injuries, four men are soldiering on in their quest to “ruck” the Bruce Trail to honour war victims and raise money to help get homeless veterans off the streets.

They will take their final steps on Aug. 7, having stopped at over 20 Legions along the way, including the Erin branch, which has voted to contribute $8,000 to the campaign.

Di Julio, who couldn’t serve in the military due to epilepsy, founded the annual fundraiser as another way to support frontline responders and the military.

“That was the thing that I always wanted to do,” he told the Advertiser on July 26, 22 days into their journey.

“I just wanted to be in the military, go be a pipe swinger.”

“Rucking,” which Di Julio defined as “moving at speed under weight,” includes carrying rucksacks – a military style backpack – loaded with everything they need for the day and weighing 40 to 50 pounds.

“We head off usually trying to do three, four or five kilometres an hour, depending on the terrain,” he explained, adding they usually cover about 25 to 30km a day.

Di Julio noted it was a bit of a slow start when they were in the Bruce Peninsula due to the rough and elevated terrain.

“You hit the blaze and you’re looking around for the next one and it’s straight up on the rocks and you’re like, it’s not a trail,” he said.

“We keep using that word, but it doesn’t mean what you think it means.” 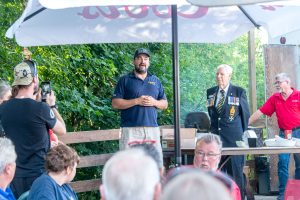 The Erin Legion held a barbecue on July 28 in support of the Road to Recovery team. Here, Lino Di Julio, Ruck 2 Remember founder, stands alongside Legion members and attendees. Photo by Tristan Clark

The annual ruck, now in its ninth year, first began in 2013 with a hike from Hamilton to Parry Sound.

“We got bricks and engraved the names and ranks and hometown of everybody that we lost in Afghanistan and carried those up,” Di Julio said.

“After a bunch of learning from that event, we decided we’d continue doing the event each year,” he explained.

“And we’d let the number of veterans and first responders that died the year before determine the distance.”

He said that usually works out to between 140 and 160km, which would be completed over the course of four days on a road march, as opposed to a trail.

Over the past eight years, the team has raised close of half a million dollars, sitting at $423,249 raised for Operation: Leave the Streets Behind – a charity run by the Royal Canadian Legion that aims to get and keep veterans off the streets. The organization has helped over 1,000 veterans.

This year, Di Julio said he was looking at ways to raise another half million to bring the total to $1 million.

“So we concocted this crazy idea that instead of four days we will ruck 34 days on the Bruce Trail because it’s kind of an iconic Ontario, Canadian, patriotic thing to do,” he explained.

“So that’s kind of how we got to where we are now.

“No regrets. It’s certainly difficult, but it’s got unique challenges and unique things that are easier.”

Ward, a veteran of the Princess Patricia Canadian Light Infantry (PPCLI), acts as the team’s lifeline, doing morning and evening pick-ups and drop offs, maintaining communications with the Legions and trailing the men in his truck for supplies and support if needed.

On the experience over the past 22 days, Dimauro, also a veteran from the PPCLI, said the pictures can’t capture what they’ve seen.

“If you want to see a lot of the stuff that we saw, you have to earn it to go out there and put a heavy thing on your back and go out and find it,” he said.

“We trained really hard for this for almost a year and now even the slightest incline, even the first 10 feet of stepping uphill, my legs are on fire like I’ve been walking for a month.” 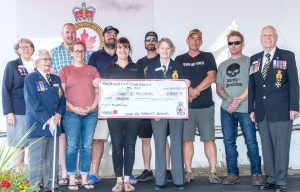 The Erin Legion presented the team with a cheque for $8,000 to support Operation: Leave the Streets Behind on July 28. Photo by Tristan Clark

For Di Julio, it’s about the long-term goal for a short-term battle.

“The thing that’s probably most striking for me about the experience is no matter how bad or how terrible it gets, or how much in pain we are or any of that, it’s 34 days and then we’re done,” he explained.

“And the whole reason we’re doing this is because there’s guys who served out there that don’t get to do that.”

For him, that’s the big takeaway: remembering there are others out there in way worse condition, with no safe place to go for stability.

“So if we can endure a little bit of that pain for a month or a little more than a month, you get 20, 30, 50 guys off the streets and into a better place, that’s worth it. I’ll do that every day.”

Dimauro said the motto of this year’s journey has been “doing the thing.”

Because Di Julio couldn’t serve, whenever Ward and Diamauro recognize him doing something they did in battalion as infantry soldiers, they remind him of the motto.

“We constantly are reminding him ‘bro, you’re doing the thing,’” he explained.

“Like being away from your family, pushing your body through excruciating pain for a cause, for service – doing the thing.

“We’re just constantly reminding him that [he’s] doing everything that we did.”

While the physical aspect is important, it only gets you so far, Di Julio explained.

The natural elements haven’t deterred these four men. Obstacles like poison ivy, 14 falls – one of them a near plunge to death – a torn shoulder and cracked feet are all a part of the journey.

“I’ve worked with some amazing soldiers before, especially within the field, and to see what these boys are doing and the punishment that they’re putting themselves (through), but also maintaining a positive spirit and with that goal-oriented mission, it’s incredible to watch them out there perform,” Ward said.

“And I know what it’s like to be cold and tired and hungry and to deal with deprivation of being just exhausted, walking, continuously bounding … and these guys are doing it for a cause greater than all of us.”

In conversations while out on the road, Di Julio said people – even veterans themselves – often don’t realize there’s a large homeless veteran population.

“I think it’s important for people to take a moment and realize that we do have a veteran homelessness problem in Canada,” he explained.

“People don’t think about that.”

For more information about the campaign or to donate, visit ruck2remember.wixsite.com or the team’s Facebook page.