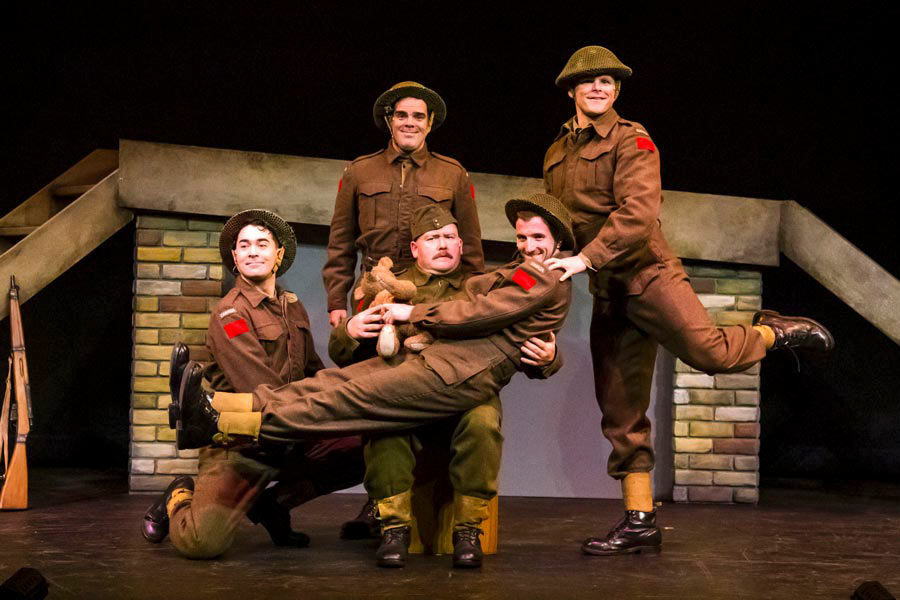 Second World War tribute - You’ll Get Used to It ... The War Show is on stage at St. Jacob’s Country Playhouse until June 22. Submitted photo

ST. JACOBS – During a year marking the 75th anniversary of D-Day, You’ll Get Used to It … The War Show brings to life the realities of war in a unique, unconventional and rarely experienced way.

The Drayton Entertainment musical tells the story of six Canadian soldiers who go from basic training to the battlefields of Europe together.

It is on stage at the St. Jacobs Country Playhouse until June 22.

The musical, written by Canadian playwright Peter Colley, at times causes emotional confusion. There is a humorous scene followed by an unbelievably sorrowful scene in the span of a few moments and the emotional roller coaster the audience experiences is overwhelming at times.

However, upon reflection, that emotional roller coaster may have been intentional on Colley’s part, to help the audience understand a mere fraction of the feelings soldiers felt going from the excitement of their initial enlisting to the boredom of no action in Europe to the horrific scenes experienced on the battlefield.

While impossible to ever understand, You’ll Get Used to It … The War Show does not shy away from addressing the less romantic aspects of war and the tragedy experienced by those fighting for Canada’s freedom.

All had stand out performances in roles that can’t have been easy to take on. They all portrayed Canadian war heroes with respect and dignity. They were able to switch between portraying the camaraderie and joking natures of young men out on an adventure to the desperation and fear felt by hardened soldiers who had seen too much.

Actors AJ Bridel and Amber Tomlin rounded out the cast playing the majority of the supporting roles, though the soldiers also took on more than one character throughout the show.

Bridel stole the show with her countless accents and chameleon-type portrayal of a range of characters from an elderly Canadian woman to a young British woman in a pub in England.

Tomlin’s voice soared in both solos and group numbers. Together, Bridel and Tomlin’s voices harmonized exquisitely to create a hauntingly beautiful sound.

Director Alex Mustakas expertly guided his cast through an emotionally demanding show. With monologue after monologue, Mustakas’s cast was able to keep the audience engaged in what could have become repetitive and boring.

However, each monologue was different and each character told a different message.

With lighting designer Jeff JohnstonCollins’ precise spotlighting, the pace moved quickly and the audience could follow along easily without having to think about where to shift their focus.

In a fast-paced, action-packed show this is much appreciated.

For monumental war moments, the stage was filled with a good mix of actor interpretation and real life footage and sound. However, Antscherl set up the stage in such a way that the screens and projections were an excellent addition to the live theatre, rather than sticking out like a sore thumb.

While not necessarily visually graphic, the content is more suitable for an older audience.

You’ll Get Used to It … The War Show is an excellent tribute to Canada’s fallen, veterans and active soldiers.

Regular performance tickets are $48 for adults and $29 for youth under 20 years of age. Tickets for select discount dates and groups of 20 or more are $39.

You’ll Get Used To It … The War Show is on stage until June 22 at the St. Jacobs Country Playhouse.

The production will then move to the Huron Country Playhouse in Grand Bend from June 27 to July 13.

Tickets may be purchased in person at any Drayton Entertainment box office, online at www.draytonentertainment.com or by calling the box office at 519-747-7788 or tollfree at 1-855-drayton (372-9866).