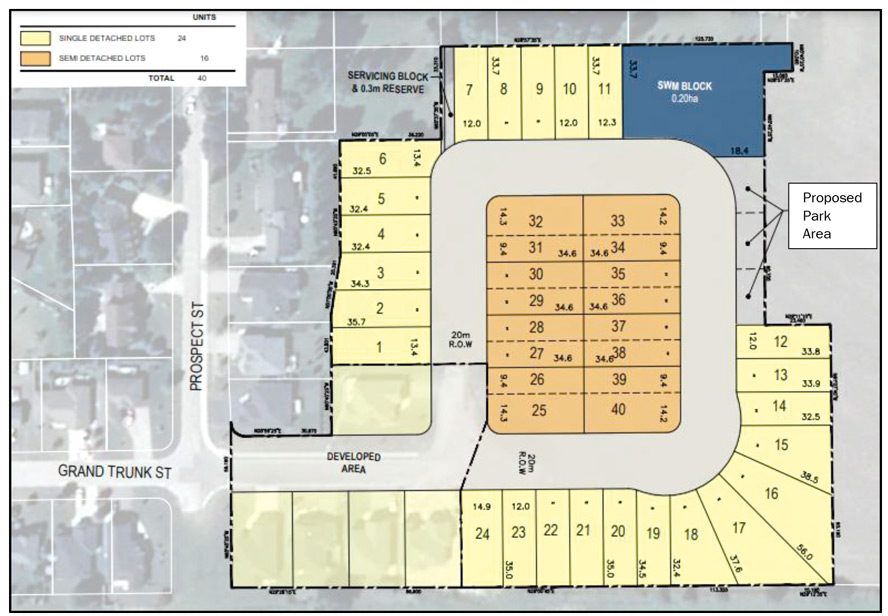 Galaxy Homes is proposing to increase the density of the Clair Ridges subdivision in Palmerston from 27 to 40 residential units through the addition of semi-detached homes. Minto council agenda image

PALMERSTON – Some local residents are concerned about potential traffic levels and other issues arising from a proposal to increase the density of a planned subdivision here.

A proposed draft plan of subdivision redline revision and zoning bylaw amendment for the Clair Ridges subdivision in Palmerston was the subject of a Town of Minto public meeting on Sept. 7.

Developer Galaxy Homes is seeking to increase the density of the subdivision from 27 to 40 units by adding a mix of semi-detached homes into a plan that originally called for 27 single-family residences.

Currently in the process of purchasing the property from the original developers, Guelph-based Galaxy Homes is now proposing to build 24 single detached homes and 16 semi-detached units on the 7.93-acre property.

A report from Minto planning technician Ashley Sawyer notes the original draft plan of subdivision was approved in 1994 and has been revised over the years, most recently in 2017.

Wellington County planner Matthew Daoust explained the zoning amendment, which would change the designation from R1D to R2, is needed to facilitate the addition of the semi-detached units.

However, he noted that due to public concerns, Wellington County will be requesting a traffic study.

After the public meeting, Daoust explained, staff will finalize review of the proposed revisions and report back to council. If council endorses the draft plan, staff will proceed with the process to amend the zoning bylaw.

Six letters expressing concerns, ranging from increased traffic to impact on neighbouring property values, were received prior to the meeting.

“We purchased our home on Prospect Street in 2014 and we did so after reviewing the original subdivision plans and carefully considering how this would impact the traffic on the street in front of our house,” local resident Jennifer Frayne stated during the virtual public meeting.

“We decided we could live with the 27, 28 homes behind our house, knowing this would mean an additional 54 cars going by our house each day. It was the upper limit of what we considered reasonable and we are extremely disappointed to learn that these plans, which we believed to be set, are changing.”

Frayne added, “The 54 cars, which we were wary of but accepting, will realistically be more than 80. This is significantly more.

“I can say with certainty that we would not have purchased our home if we had known there was the potential for 40 additional units behind us.”

Another local resident, Alex Goddard, said, “I purchased this property as an investment. And my investment doesn’t just include this property but the entire neighbourhood and the curb appeal.

“I purchased this property with the understanding that they would be single-family, single-storey homes.”

Goddard said he knows of two families who moved away from another newer, mixed-density subdivision in Palmerston “specifically because of the noise coming from the joined homes.

“When you pack homes closer together, you’re selling cheaper homes to younger families which means more noise, more parties, more cars on the streets. And it chased people off of that street. I don’t want to be chased of our street with increasing noise caused by this,” Goddard added.

Resident Mary Beth Wilson stated, “When I built here three years ago, as much as anybody could, I was guaranteed a subdivision that would be single-family, single-storey homes with a potential for semis.

Brown also noted there is a school crossing at the corner of Prospect and Toronto Streets.

“I’m going to assume that with 40 new homes there are going to be children, and I hope there are, but with the traffic and a school crossing, is that safe?” she wondered.

Planner Steve Weaver, of GSP Group and representing the developer, pointed out changes to a draft plan are allowable prior to registration.

“When a plan of subdivision is just draft approved, it really isn’t a final plan that has established the lotting of the site yet and there is a process in the Planning Act to actually amend that plan,” said Weaver.

“It’s quite common that draft plans of subdivision change after their initial approval … some of that’s in response to market demands. Some flexibility is needed there to adapt to different types of market conditions, different type of housing that people prefer.”

Weaver added, “The goal of Galaxy was just to make the use of the land more efficiently … without changing the fundamental layout of the land.

“A semi-detached dwelling is not a vastly different dwelling type than single detached. It simply means that two houses are connected together on one side, the other side of each of those homes are not connected to another home, and there is a centre lot line.

“Single and semi-detached homes are quite commonly found together and we do see that elsewhere in Palmerston as well. One- and two-unit and even three-unit dwellings can exist together and don’t look significantly different in terms of their built form.”

Weaver noted many of the residents’ concerns are traffic related and a traffic study has been requested by the county.

“I share concerns. I certainly understand the need for development …. but I’m very concerned with the one-street (access) as well,” said councillor Jean Anderson.

“You have to wonder about a community like that, where there’s only one way in and the same way out,” she added.

Deputy mayor Dave Turton said, “I agree with a lot of the things that have been said by the folks that live in that area.” He wondered “how flexible” Galaxy Homes could be in terms of lot sizes and number of semi-detached units.

“We appreciate you guys looking at Minto to develop in and putting up a bunch of new houses,” said Turton.

“That is the wave of the future … but we certainly need to listen to the will of the people and go forward.”