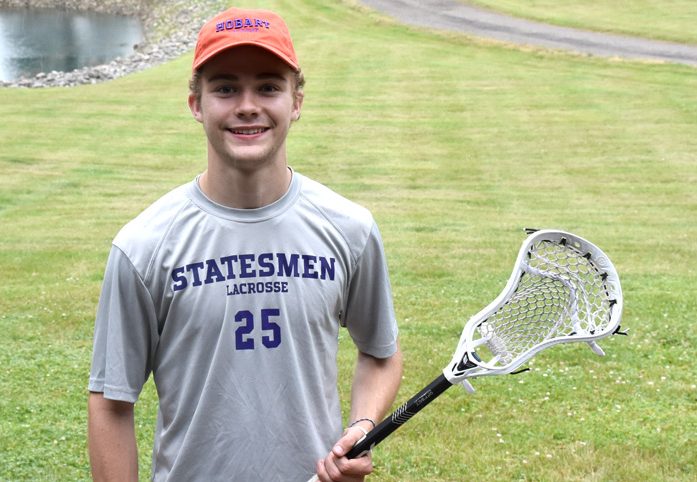 Joel Stevens was recently named to his conference’s academic honour roll in his freshman year at Hobart College in Geneva, New York. Stevens is a member of the Hobart Statesmen men’s lacrosse team, which competes in the Northeast Conference in Division I of the NCAA. Photo by Curtis Gordon

PUSLINCH – Joel Stevens, a student-athlete from Puslinch, has earned a spot on the Northeast Conference’s (NEC) academic honour roll.

Stevens, who had to maintain a minimum grade point average of 3.2 in the spring semester to make the honour roll, recently finished his freshman year at Hobart College in Geneva, New York.

He plays on the Hobart Statesmen men’s lacrosse team, which competes in the NEC in Division I of the National Collegiate Athletic Association (NCAA).

Stevens grew up playing lacrosse in Guelph. He played Ontario Junior B lacrosse for the Guelph Regals and attended Centennial CVI in Guelph for his Grade 9 and 10 years, before attending Culver Military Academy in Indiana. There he led the school to a national championship in 2019.

“When I was in Grade 7, my brother, who’s at Princeton now, got recruited to Culver,” Stevens said.

“He went there for two years, and then their coach, Jon Posner, reached out to me. I was a little nervous at first, with the military and everything, but it was probably the best decision I’ve ever made.”

Stevens said many people who attend Culver don’t know what to expect going in, but since his brother was there, he already had an idea of what was in store.

“It was his senior year at the time, so he helped me out a lot,” he recalled.

“We got inspected and had to clean our rooms every single night; they had to be a certain way.”

Stevens said it wasn’t easy to leave home at age 15 for a new country.

“Lacrosse was really tough there. Going from just playing in the summer here, to having something every day for three hours really taught me a lot,” he said.

“It was all about leadership and time management. The system really taught me a lot.”

Stevens said Posner helped him reach out to a number of teams, allowing him to get onto Hobart’s radar.

His first season had a number of ups and downs, as the pandemic interfered with the conference schedule.

“Going in with COVID, it was super weird,” Stevens said.

“They had us wear these plastic shields over our masks. And we had these early morning practices, so it was cold, and we’d get out there and [the shield] would start fogging up.”

“Most years, the freshmen usually play in out-of-conference games. Since we didn’t have any of them, only a handful of freshmen actually got to play this year,” he said.

However, Stevens did play in the team’s one scrimmage, and scored a goal.

“That was my highlight of the year,” he said.

The team had six wins and two losses in the regular season, and advanced to the NEC’s conference semi-finals before being eliminated.

This year, Stevens was one of 28 Hobart lacrosse athletes honoured for their academic achievements.

Stevens said at Hobart, his coach has made it clear that academics come first.

“At a lot of bigger schools, it can be hard to monitor the players, but we only have 3,000 students,” he said.

“We have smaller classrooms and the professors will let you know how you’re doing.”

Stevens said it felt great to do well academically because coming into his freshman year, he wasn’t sure what to expect.

“I think Culver really prepared me with time management and having a busy schedule,” he said.

“The only thing I struggled with was the workload. It takes a lot more time. You have to study. You can’t cram the night before; you have to make sure you’re preparing throughout the week.”

Stevens said he is looking forward to going back to Hobart in the fall for his sophomore season.

“Hopefully we’ll have a little more freedom and get to see everybody, because this year we were restricted,” he said. “I think we’ll have a really strong team this year, and I’m really excited.”

Stevens said he plans on declaring as an economics major with a double minor in French and environmental studies.