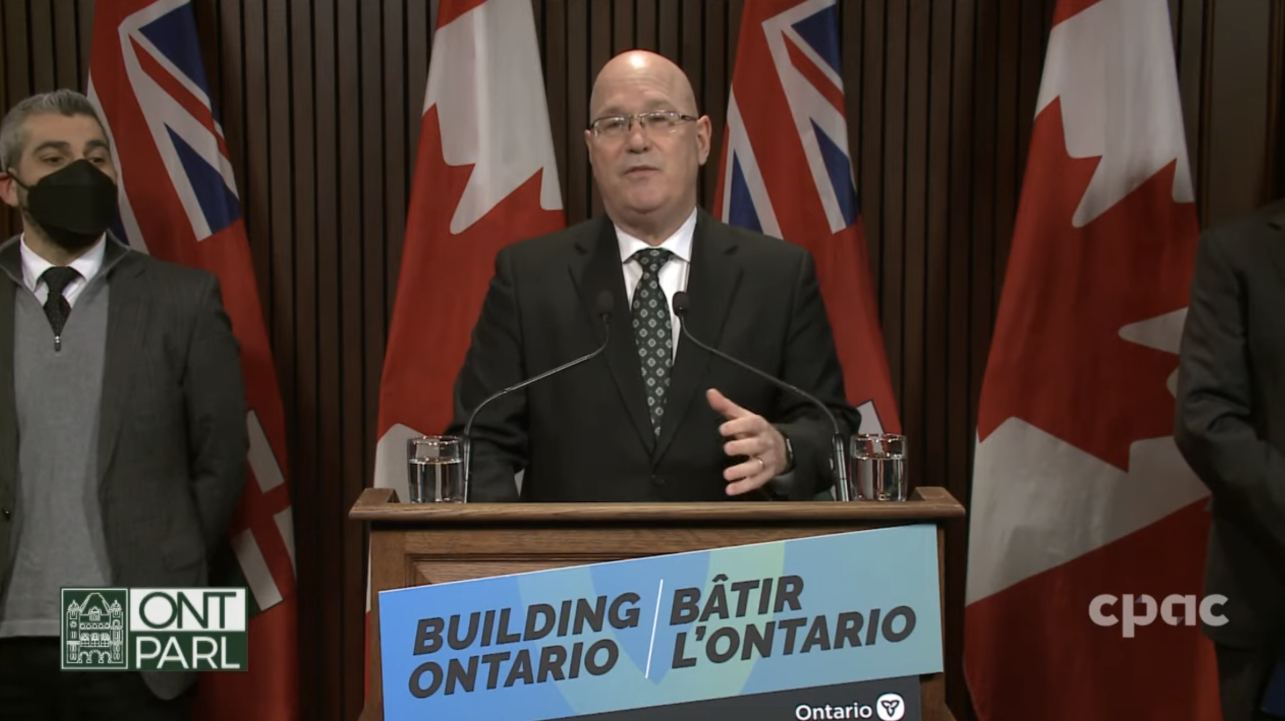 TORONTO – The province tabled new legislation on March 30 that takes aim at municipal planning schemes to address a lack of housing supply.

The proposed More Homes for Everyone Act, introduced by Municipal Affairs and Housing Minister Steve Clark at Queen’s Park on Wednesday, outlines a four-year plan the minister says will get houses built faster.

Following the introduction, Clark addressed reporters saying, in part, during his opening remarks, that “long, drawn-out processes are delaying housing and pushing the dream of home ownership for too many Ontarians.”

The bill, he said, would make “housing fair for hard-working Ontarians and get all types of housing built faster.”

A Housing Affordability Task Force report, released in February, is the government’s “housing roadmap,” Clark said, adding the government is committing to implementing an annual housing supply action plan over the next four years, beginning in 2022-23.

However, as reporters brought to the minister’s attention following the announcement, the bill doesn’t implement many of the report’s 55 recommendations.

The legislation tabled on Wednesday afternoon is intended to implement “immediate changes,” Clark explained, saying it would get shovels in the ground faster.

Clark said municipalities aren’t ready to adopt the task force report’s “ambitious policies” and said some have gone so far as to object to the report.

“We’ve gotta have municipalities not work against us; they’ve gotta work with us,” he remarked.

The minister acknowledged the bill does not provide a one-stop solution, and said more would need to be done through additional legislation.

The province is planning on forming a Housing Supply Working Group this summer to engage with municipal and federal governments and ensure housing supply action plans are being implemented at local levels in the future.

Changes to the Planning Act under the newly introduced legislation would, if passed, shift site plan control decisions from municipal councils to municipal staff, who, as of July 1, would make decisions on the applications.

Site plans – assisting municipalities in evaluating site elements such as walkways, parking, landscaping and exterior design – would have a review period extended from 30 to 60 days.

The province would also introduce an additional Minister’s Zoning Order-like option for municipalities to pursue, called the Community Infrastructure and Housing Accelerator.

It would allow a municipality to bypass their own approval processes and apply to the Municipal Affairs and Housing Minister to approve prescribed types of housing such as non-profit housing, market housing or long-term care housing.

Municipalities would need to host public consultations, make Community Infrastructure and Housing Accelerator orders public, and abide by conditions imposed by the minister.

Further amendments (that would come into effect at the start of next year) would incentivize municipalities to approve plans and make decisions on zoning bylaw amendments by forcing the refunding of application fees if a municipality doesn’t move fast enough.

The province wants more data collected to understand demand-supply relationships and would require municipalities to report on development applications throughout various stages.

The province also wants to spend $19 million over three years on the Ontario Land Tribunal and Landlord and Tenant Board, with the goal of speeding up decisions and reducing case backlogs by increasing staff resources.

What can and can’t be required as a condition of a subdivision draft plan approval would shift to a regulation-making authority.

A one-time discretionary authority would allow municipalities to reinstate draft plans of subdivision that have lapsed within the past five years without a new application where units have not been pre-sold to prevent redundancies.

Changes to the Building Code would allow for mass timber, 12-storey buildings and streamline modular multi-unit and residential building approvals – with further long-term initiatives to come.

Other initiatives announced on March 30 include:

A 42-page document outlining the province’s plan, presented to reporters under embargo before Clark’s press conference, is available at the bottom of this article.

“The bill does nothing to take on speculation. It doesn’t help renters or buyers. It doesn’t even do the bare minimum its own task force recommended.

Added Horwath, “We are in a housing crisis, and it’s clear that Doug Ford is more interested in his buddies cashing in than in helping families find a home they can afford.”

Liberal Leader Steven Del Duca said Ford’s  government has “only made the (housing) problem worse” since taking office in 2018.

The Liberal leader went on to say the Conservatives’ plan has “no help for first-time home buyers, no investments in affordable housing, no rent control, no zoning reform, and no taxes on developers sitting on land.”

Schreiner suggested the Greens’ housing strategy as a remedy, calling for expanded zoning options, an additional 160,000 affordable homes, a provincial vacant home tax, a financing task force, and the freezing of urban boundaries.