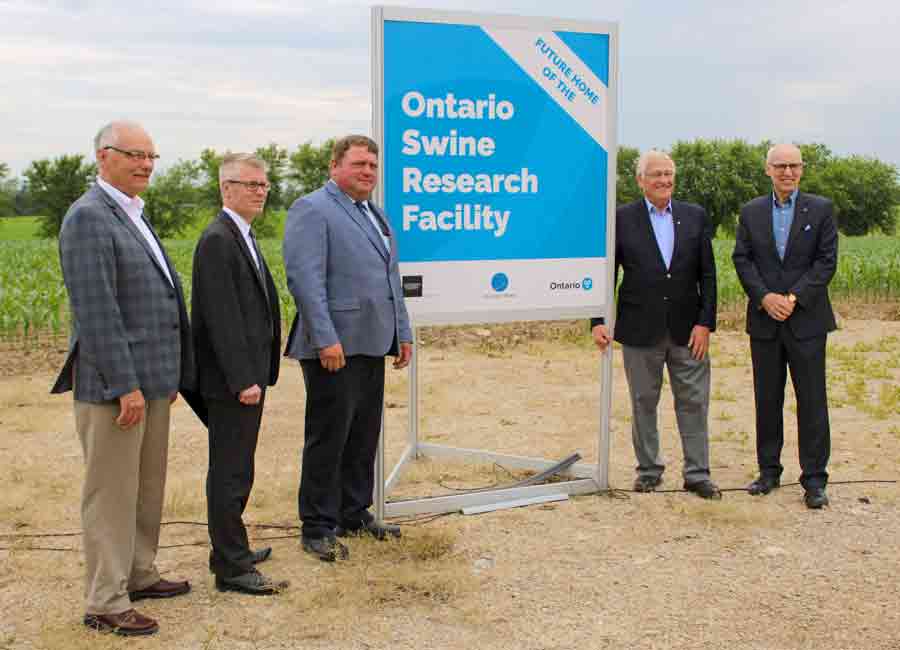 ELORA – Minister of Agriculture, Food and Rural Affairs Ernie Hardeman announced on Tuesday that a new swine research facility will be built in Elora.

The new facility, costing an estimated $15 million, is expected to replace the current Arkell Swine Research Station near Guelph and offer state-of-the-art technology to advance the swine sector.

“We have all known that Guelph is the headquarters for agriculture, not only in Ontario but I think moving right along to be head of agriculture in the dominion of Canada,” said Hardeman.

“But what I find interesting is Elora seems to be becoming the centre for animal research.”

He was referencing both the beef research centre announced in 2017 and the Livestock Research Innovation Centre – Dairy Facility, which opened in 2015 at the Elora Research Station.

The new swine facility is still in the design phase and is expected to take three years to complete.

The project is a partnership between the province, Ontario Pork and the University of Guelph.

It is also a joint investment, with the province providing $12 million through the Agricultural Research Institute of Ontario, and Ontario Pork investing the other $3 million.

According to Malcolm Campbell, vice president (research) at the University of Guelph, the new facility will be built west of 2nd Line, located close to the Elora Research Station.

The swine research facility will allow researchers from the University of Guelph to make advancements in a wide number of disciplines related to the pork industry, including animal health, nutrition and welfare, consumer-oriented research, environmental factors, genetics and genomics, nutrient management and reproduction.

“This new building … will ultimately give farmers the latest research findings, processes and technologies; this will benefit their farm businesses and operations,” said Hardeman.

“It will help them become more efficient and sustainable so they can be more profitable and competitive.”

The facility will relocate swine research in the province from the Arkell Research Station outside of Guelph built in 1975.

“It is amazing how we produce pork today, how much less water we use, less feed, more economical,” said de Bruyn.

“We produce a protein that’s demanded by the market and so what we look forward to is the next 40 years with a new facility and staying ahead of the industry and creating value.”

According to de Bruyn, there are 1,200 pork producers in Ontario providing 14,000 full-time jobs and $2.8 billion in economic input.

The announcement of the new facility comes only a week after China placed a ban on Canadian meat, including pork and beef.

The embargo began  after Chinese officials said residue of a banned feed additive called ractopamine was found in a pork shipment from Canada and a subsequent investigation found 188 falsified veterinary health certificates.

Canadian food inspectors and the RCMP are investigating the certificates.

China has already banned shipments of Canadian canola oil and many attribute the rising trade tensions between China and Canada to Canada’s detainment of Meng Wanzhou, chief financial officer for technology company Huawei.

During the announcement of the new swine research facility, the minster took the opportunity to address the China ban.

“I want to … discuss a new challenge impacting the industry: China’s ban on Canadian pork and beef products,” he said.

“I know this sector … has faced a lot of challenges in recent years, but pork and beef are important to this province and we are going to fight for our farmers, producers and packers and everyone else involved in our meat sector until the issue is resolved.

“The quality of Ontario meat products are, and always have been, ranked among the best in the world and this trade dispute does not change that.”

Hardeman said he spoke last week with the federal Minster of Agriculture on the issue.

“In the interim, I want everyone to know that we are exploring ways to help our beef and pork farmers develop and diversify new markets and opportunities for their products and I want to say we will do everything we can to lessen any impacts there are and hopefully at the end of it we will actually be more resilient in the pork and beef industry moving forward from here,” he added.

“It is more important than ever to make strong investments in research and innovation that will help this industry become more sustainable and resilient,” said de Bruyn.