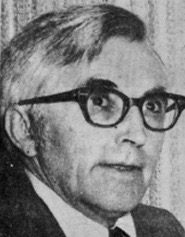 PALMERSTON – A plaque honouring respected local newsman Art Carr will be unveiled at a ceremony here on June 14.

Carr, who held every job title from printer to publisher at the Palmerston Observer, owned the paper from September of 1938 to March of 1977.

He was among the first inductees in the Ontario Community Newspaper Association Hall of Fame in April of 2020.

Carr worked as a printer at the Sudbury Star, beginning at the age of 13 and also worked at the Sudbury Journal Printing Company, the North Bay Nugget and the Nickel City Press.

On April 1, 1934, Carr joined the Palmerston Observer as a reporter.

The Carrs raised one daughter and three sons, with Freda helping out in with the printing when Carr’s other duties took him away from the job.

In the fall of 1959, Carr began publishing The Observer using a new printing process known as offset lithography, making it the first newspaper in Ontario, the third in Canada, and (it is believed) the eighth in the world to adapt this process for the publication of a newspaper.

The June 14 ceremony will be held at the Palmerston Lions Heritage Park, with a gathering beginning at 5:30pm prior to an unveiling ceremony at 6pm.