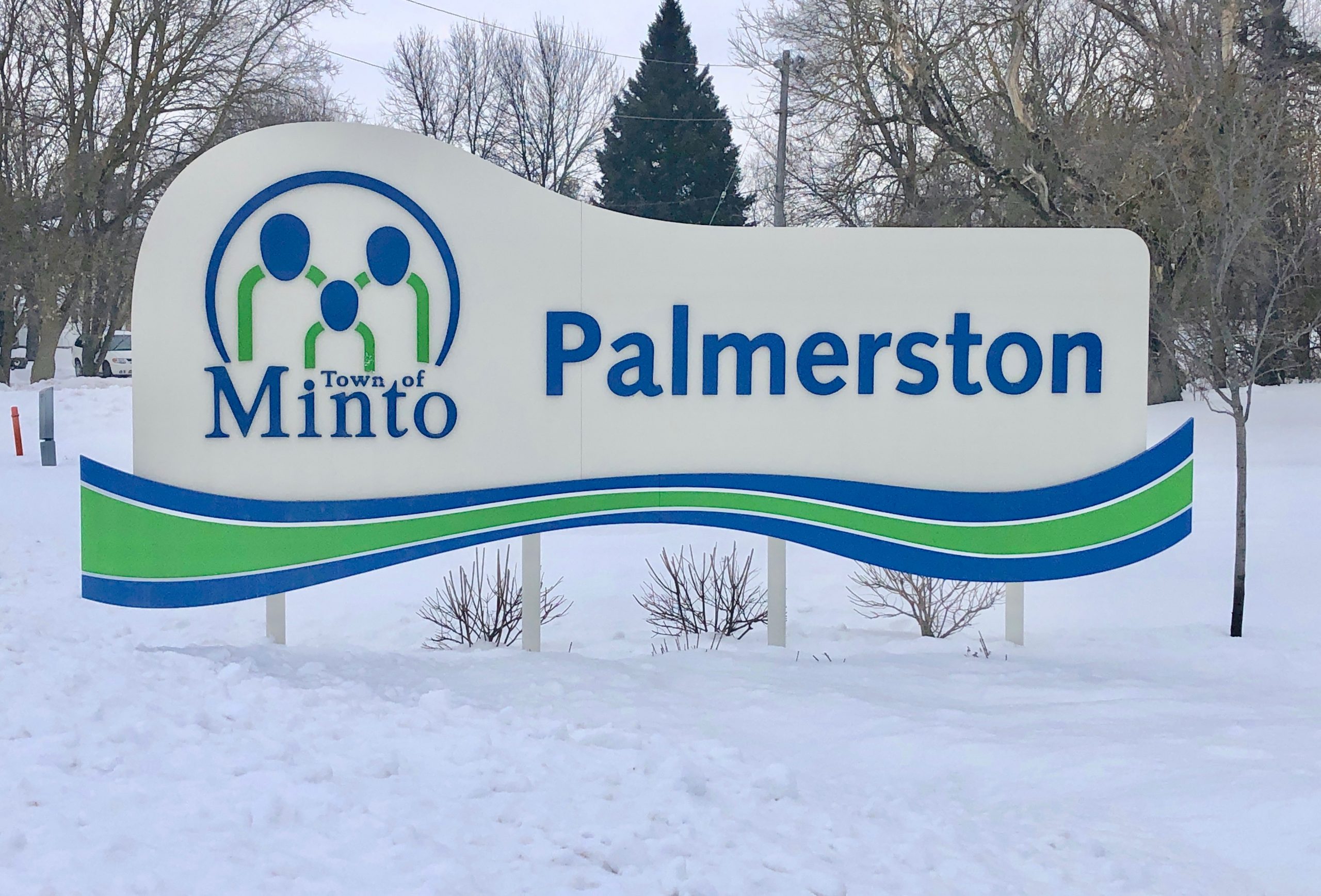 MINTO – Plans to expand the urban boundary of Palmerston are moving forward.

Following a Feb. 16 public meeting on a proposal to adjust boundaries of the town’s three urban centres, Minto council has approved a draft official plan amendment which will be forwarded to the County of Wellington for consideration.

In October, council directed staff to prepare an application for an amendment to the Wellington County Official Plan to increase the urban boundary of Palmerston in order to accommodate projected growth in that community.

At the same time, the proposal would result in a decrease in the urban boundary areas of Harriston and Clifford.

In 2017, the town began secondary planning work in Clifford and Palmerston to prepare for the county’s 2020 five-year official plan review.

The West Palmerston Secondary Plan went to council in April 2018 with an informal public consultation that September.

The secondary plan proposes policies on future roads, trails, land use, servicing and reducing from 500 to 30m the setback from a closed landfill east of the planning area.

In May of 2019, the province changed the Growth Plan for the Greater Golden Horseshoe to allow small urban boundary expansions outside formal five-year official plan reviews. This meant the Palmerston urban boundary could grow without waiting several years while the county reviewed its entire official plan.

In October of 2019, council proposed reducing the Clifford urban boundary to support expansion in Palmerston, and requested an engineering study to address the 500m setback from the closed landfill.

Early in 2020 staff met with Clifford landowners for feedback on boundary changes, while lands for trade-off were examined, such as unserviced town-owned industrial property in Harriston.

A 56-hectare (146-acre) reduction in urban boundary would be achieved by removing farmlands at the south end of Clifford and lowlands around the village’s sewage lagoons and John Hobleman Park. The reduction would still allow for more than 200 units of residential growth in north Clifford. 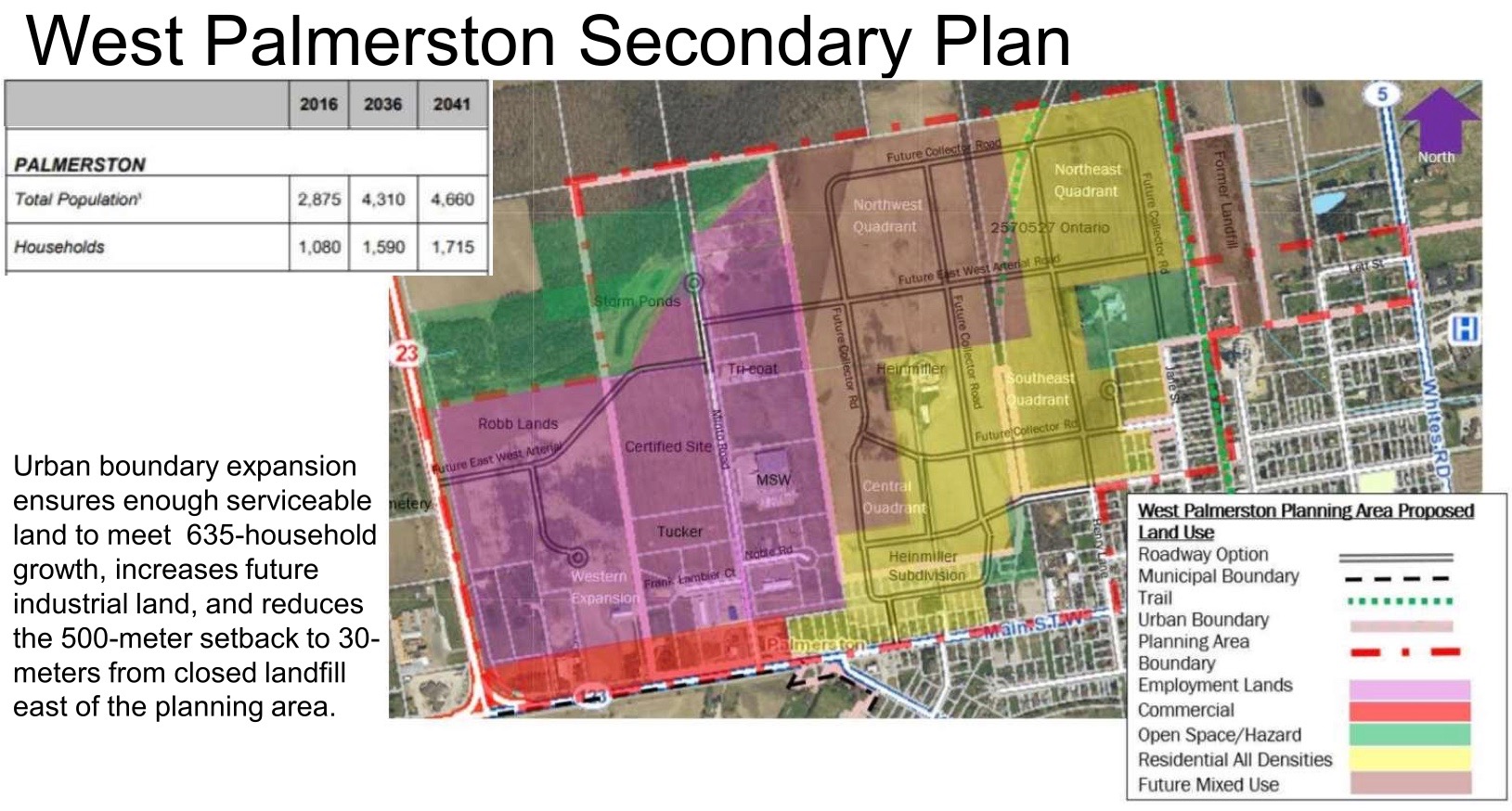 A draft official plan amendment that would expand the urban boundary of Palmerston while reducing urban area in Clifford and Harriston was approved by Minto council on Feb. 16. The proposal will be considered by the County of Wellington.

A 15-hectare (38-acre) reduction to the urban boundary in Harriston would be achieved by excluding town-owned industrial lands near the Harriston sewage lagoons.

The plan would still allow for future servicing of 46 acres for industrial use and the town can continue to implement a Class EA approved in 2017 to expand the Harriston Industrial Park.

“In essence this area in Palmerston that is proposed for this expansion is more or less ready to go,” said White, who anticipated the boundary adjustments would result in increased property values in the community.

“What we’re seeing now is the urbanization of this area,” said White, adding, “It’s going to take many years.”

Councillor Jean Anderson asked if the proposed urban boundary reductions in Clifford and Harriston would negatively impact those communities.

“We’ve taken away residential space in Clifford and in Harriston and we’ve given it to Palmerston and we think we can accommodate it,” said Anderson.

“Is that still the thought with the current growth and development that’s happening right now? Because we’ve never seen anything like this for as long as I’ve lived in this community.”

She asked, “Will it restrict Clifford from expanding where it would like to expand or Harriston, by doing all this urban expansion in Palmerston?”

White replied, “This switch and trade off does consider the fact that there’s quite a bit of growth going on throughout the municipality, so I don’t think that Clifford is unreasonably restricted.

“I think they’ll be able to meet the growth projections for this area.”

While White said he is confident the proposal will set up all three Minto urban areas to meet current growth projections to 2041, he pointed out the province is in the process of amending its Growth Plan for the Greater Golden Horseshoe Area, which includes Minto, to include projections to 2051.

“I think the town will want to watch the comprehensive review that’s going to come forward … there’s another 10 years’ worth of growth you have to accommodate,” said White, noting the forecast could add 500 to 600 units across the municipality by 2051.

“So on a residential basis, Jean, we never took anything from Harriston – it was industrial,” the mayor stated.

“And up in Clifford a lot of the areas that we took out … some if it is prime agricultural that has barns on it and dairy, so I think we’ve been very careful about not taking good pieces of property from the other towns that could be developed. I think it was a good compromise.”

No members of the public spoke for or against the proposal during the public meeting.

During regular session, council passed a motion to support the draft official plan amendment to adjust urban boundaries within Minto and refer the proposal to the county for consideration.

Bridge thanked county planning officials for their assistance with the boundary reorganization project.

“We kind of went outside the box on this and we got good cooperation,” he stated.

Wellington County director of planning and development Aldo Salis said, “This process took a while as you know. We had a couple of different changes to the growth plan and luckily … the governments allowed us to make the changes so we don’t have to wait for the comprehensive (Official Plan) review.”

Salis noted the next steps in the process involve review by the county’s planning committee, then county council.