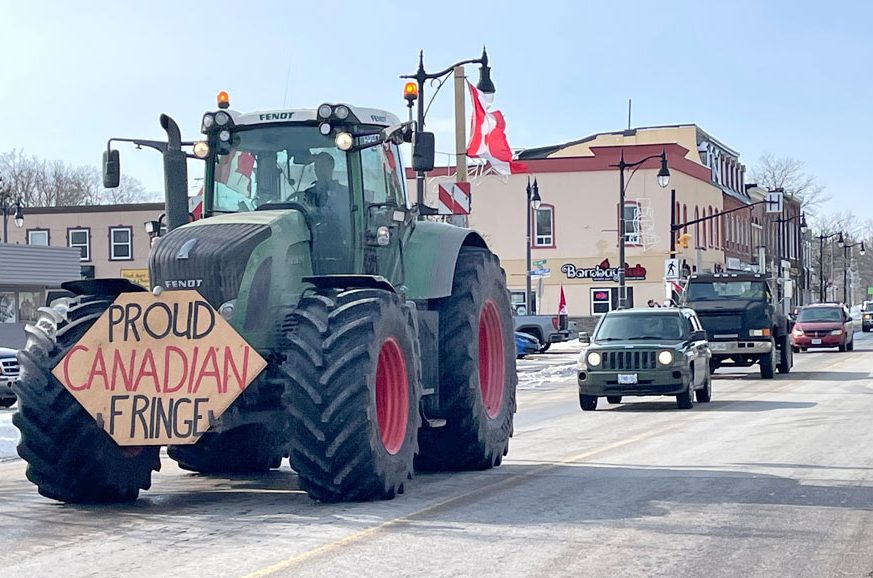 Hundreds of vehicles took part in the Perth-Wellington Freedom Convoy 2022 that made its way through Atwood, Listowel, Gowanstown, Palmerston, Teviotdale, Rothsay and Drayton on Feb. 21, with its participants flying flags and honking horns in support of ending pandemic-related mandates. The rolling protest began in Atwood and took more than half an hour to make its way through each community along the route. Photo by Dan McNee

NORTH WELLINGTON – Perth-Wellington “Freedom Convoy” organizers are thrilled with their event on Feb. 21, calling it “a fantastic day” and “a positive experience.”

“It was an awesome time, it was fantastic,” organizer Tammy Steckly said in a phone interview the following day.

“The energy level was overwhelming, in such a good way.”

She said over 700 vehicles took part in the convoy, which started at Atwood’s Elma Memorial Community Centre and rolled through Listowel, Gowanstown, Palmerston, Teviotdale, Rothsay and Drayton, before wrapping up at Driscoll Farms on Sideroad 12 of Mapleton Township. 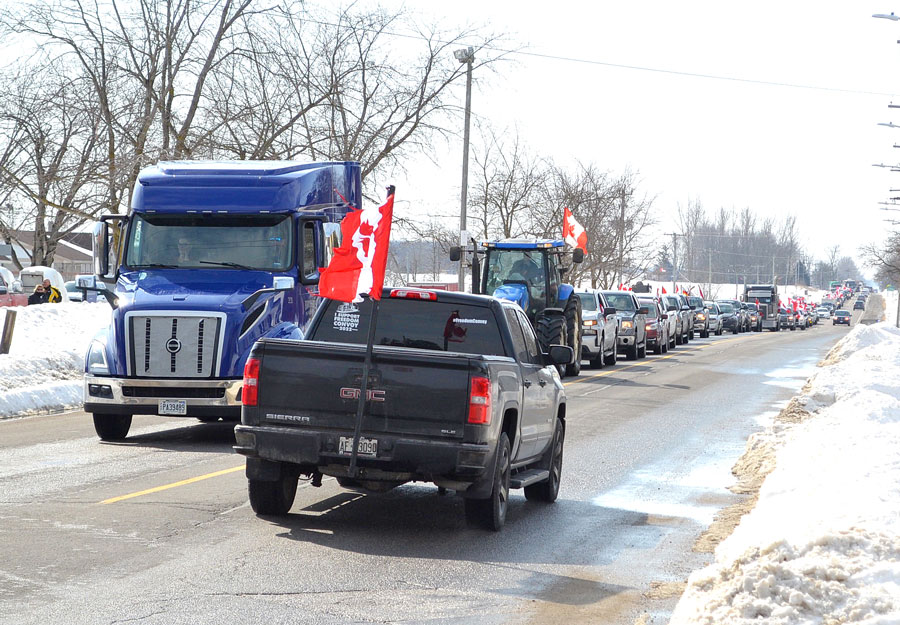 The convoy takes shape near the starting point at the Elma Memorial Community Centre in Atwood. Photo by Dan McNee

Steckly said it took 90 minutes, from start to finish, for all the vehicles to depart Atwood.

However, a Listowel Banner reporter on hand for the start of the convoy estimated its length at 21 minutes from start to finish and a Wellington Advertiser reporter in Palmerston estimated the length at about 35 minutes, with several entries passing by intermittently after the main group.

Steckly rejected the estimates provided by reporters at the convoy.

“I was there; I know for sure,” she said, adding she is “very disappointed” in the way the Advertiser has “portrayed” the convoy.

Steckly said the news media should be focused on the positive aspects of the event, rather than the negative.

“The smiles we brought to people’s faces was amazing,” said Steckly.

Convoy organizers set out to spread friendship and unity, she said, “And we did that yesterday.” 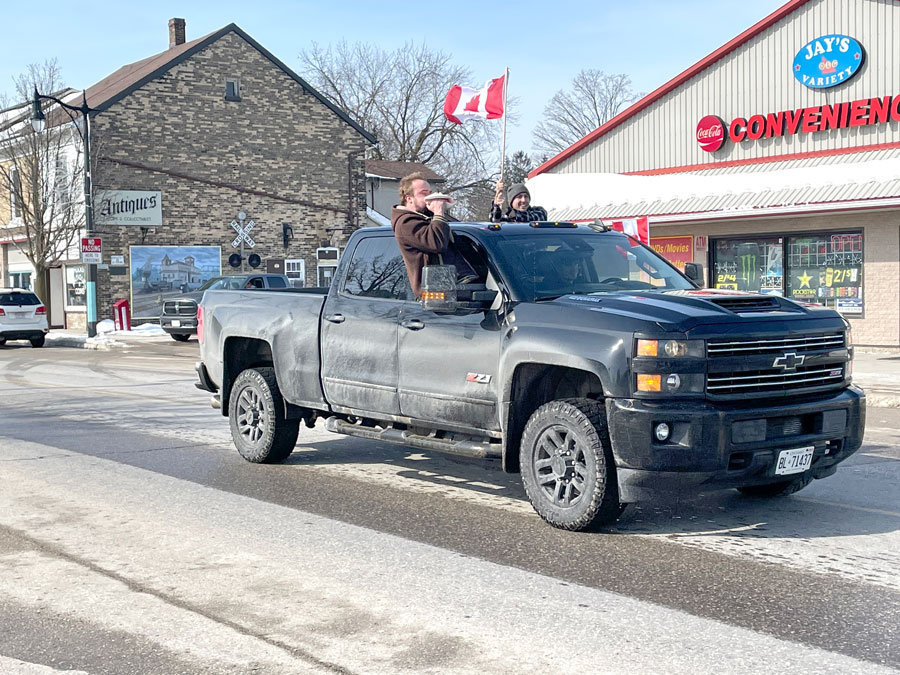 Convoy sounds off – A passenger in one of the vehicles in the Perth-Wellington Freedom Convoy blows on a conch as the rolling protest against COVID-19 mandates passes through Palmerston on Feb. 21. Photo by Patrick Raftis

Steckly mentioned the event raised $1,027 for local food banks through donations from participants who enjoyed free food brought in after the convoy.

“Not one person had a negative thing to say” about the event, she said.

However, the Advertiser received a report about police being called to the Palmerston Tim Hortons after participants in the convoy refused to wear masks.

“During the convoy we had a lot of customers without a mask on and refusing to put one on,” said Keara Kuper, assistant manager at the Tim Hortons, when contacted by the Advertiser shortly after the convoy passed through the town on Feb. 21.

“Some of our staff got a little bit upset.”

She estimated about 50 people involved in the convoy entered the store to place orders or to use the washroom.

She told the Advertiser a few of the participants did put on a mask, but the vast majority entered without one and refused to put one on when asked or offered one by staff members.

“It was a little hectic … they were not agreeing with us, that’s for sure,” Kuper said.

Restaurant staff served the maskless customers in order to “get them out of there,” she added.

“It made a lot of our staff upset,” Kuper said, noting all of the employees working on Monday were 20 years old or younger.

A parent of one of the staff members described the treatment of their child as verbal “abuse” that made workers’ jobs “difficult and unsafe.” 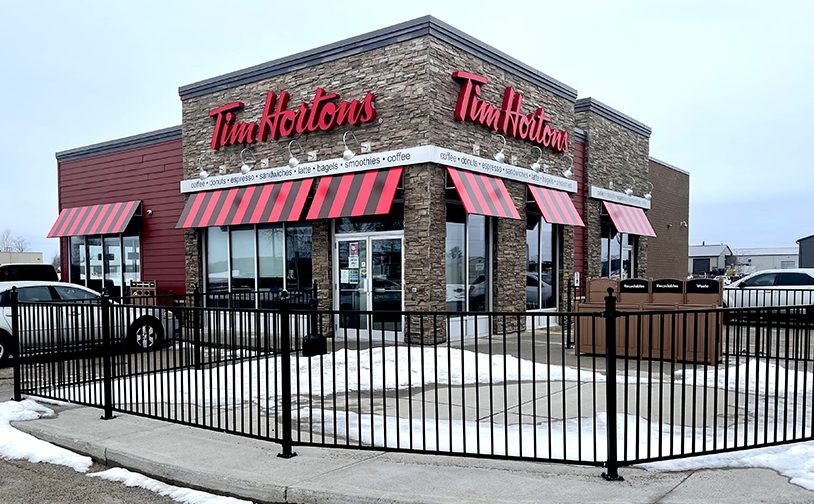 The Wellington County OPP was called to the Palmerston Tim Hortons on Feb. 21 after members of a local “Freedom Convoy” refused to wear face coverings in the restaurant, staff members say. Photo by Patrick Raftis

Wellington County OPP officials confirmed police were called to the restaurant shortly after 1pm for a report “that demonstrators had entered a business in Palmerston and were not wearing masks.”

“Officers attended, but the demonstrators had left prior to their arrival,” states a Feb. 22 email from OPP spokesperson Jacob Unger.

He confirmed, “No other incidents were reported in relation to this demonstration.”

Asked about the incident at the Palmerston Tim Hortons, Steckly said she had not heard about it and she disputed the incident had occurred, saying she doesn’t trust the newspaper.

“We know our truth and we don’t need to be validated,” she asserted.

Informed that police had in fact confirmed the incident took place, Steckly said, “Nothing anyone can say will change my mind.”

She stressed convoy participants “came together” for “peace, love, unity and freedom.”

The province has been under a mandate requiring face coverings in public spaces such as stores and restaurants since July of 2020. It is one of several public health measures introduced by the province since the onset of the pandemic to help curb the spread of COVID-19.