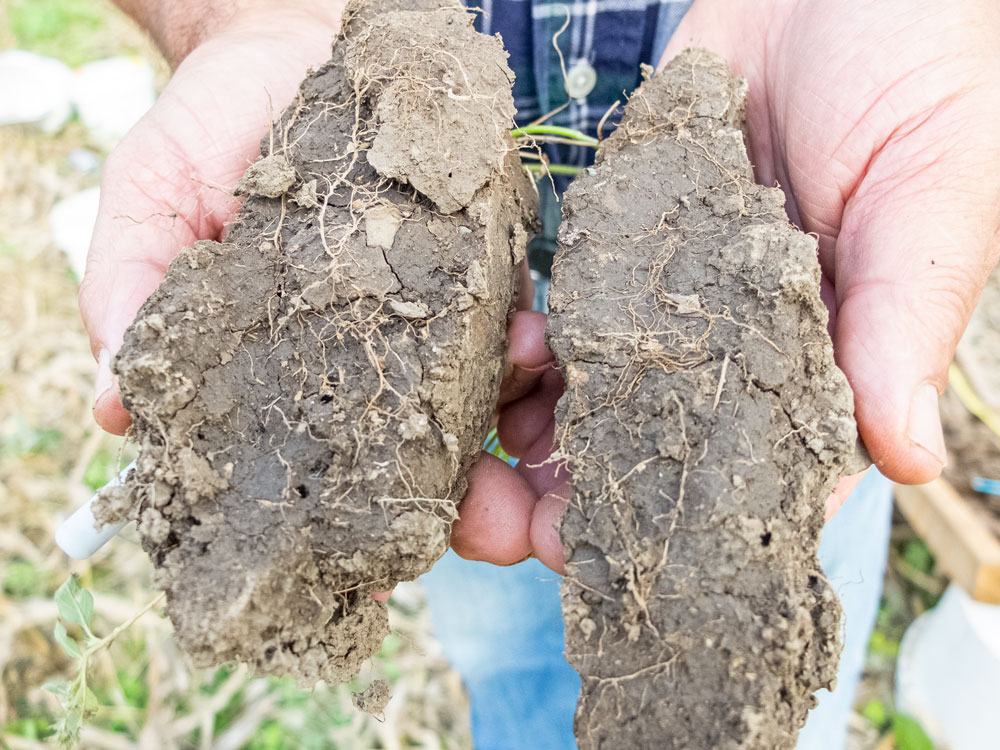 Ted Taylor holds soil samples taken from a field at 3Gen Organics, planted with corn and cover crops, to show how root systems from cover crops break up the Perth clay loam found in Mapleton. (Photo by Jordan Snobelen)

MAPLETON – Ted Taylor squeezed a few drops of hydrochloric acid from a bottle onto a soil core taken from a field at Brett Israel’s Wallenstein farm, 3Gen Organics.

As the corrosive acid soaked the sample—where the soil would have sat 60 centimetres down into the ground from the field’s surface—a fizzing and bubbling began.

Hydrochloric acid reacts that way when it contacts calcium carbonate or limestone—present in soil from thousands of years ago.

“That just tells you how deep your soil has developed over 10 to 12,000 years,” Taylor tells a group of farmers gathered in a field of beheaded corn stalks poking out around a red clover cover crop.

Taylor moves onto another sample of the Perth clay loam, taken from a different location in the same field.

This time, the acid reacts at 30 centimetres in depth, meaning the limestone in the sample is closer to the surface of the field.

“Over the decades, this site has lost a foot of soil,” Taylor deduced, blaming the loss on tillage erosion.

“This is one of the issues we’re trying to tackle in this ONFARM program—how to manage tillage erosion as a major form of soil degradation in Ontario.”

The On-Farm Applied Research and Monitoring program is a practical research initiative funded by the Canadian Agricultural Partnership and delivered by the Ontario Soil and Crop Improvement Association (OSCIA).

Started in 2019, the program explores soil health and water quality at 33 farm sites across the province, bringing together scientists, academics, consultants and of course participating farmers and their peers.

Brett Israel is one of the participants in the three-year research initiative and his farm, 3Gen Organics, was the site of an ONFARM tailgate tour stop on Oct. 14.

3Gen Organics is a multi-generational, farrow to finish swine operation with around 1000 acres of farmed land.

Israel is interseeding between four and five cover crops into every acre of green corn planted.

“We’re quite confident if we can prove this model out, it can show a different way for farmers to feed the world,” Israel said of the operation.

Don King is principal of Guelph-based Soil Resource Group (SRG), an agri-research company partnering with OSCIA and tasked with soil research and analysis.

Each field has three different soil zones chosen and monitored—there’s that much variation throughout, King explained.

Each season, soil sampling is conducted in June, when microbial activity is at its peak. SRG staff also hand-harvest crops at key sample locations.

“We can relate the soil characteristics with crop response,” King explained.

Now in the second growing season, the final sampling will be next summer.

“I guess, on the one hand, where we’re trying to establish a baseline so that 10 years from now, someone can come along, do the same measurements and say ‘hey, we saw change,’” King said of the limited research timeline.

Based on the kind of soil degradation found, management practises can be adjusted and issues addressed with solutions such as cover cropping, like Israel has implemented.

After the field presentation, local farmers heard from others like Adam Hayes, retired from Ontario’s agriculture ministry and now working with SRG, and gathered around Israel to ask more practical questions, including one farmers always need to be concerned with—the cost. 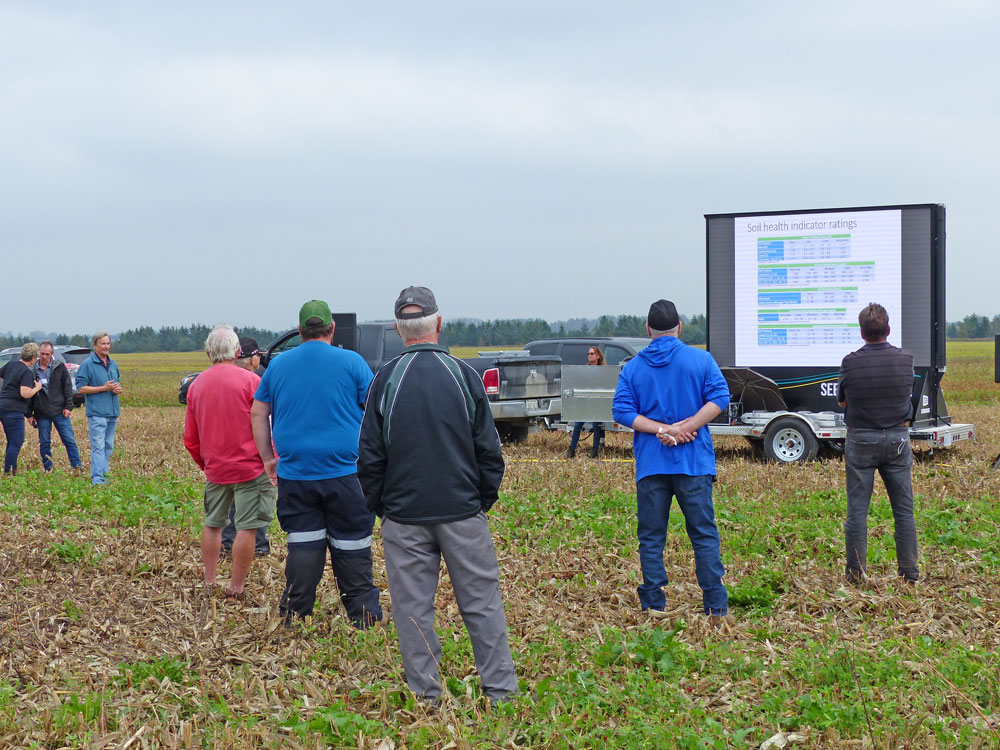 Local farmers listen to a presentation on soil health from the Ontario Soil and Crop Improvement Association at 3Gen Organics in Wallenstein on Oct. 14 as part of the association’s ONFARM tailgate tour. Photo by Madeline Rodrigue

“The cover crops certainly was a little slower out of the gate and dependent on the later season rains to really take off,” Israel said, adding he’s noticed easier harvestability of corn with a bedding of green cover for combines to ride on.

As for cost, he said, “We’re doing all this for about 20 bucks an acre in terms of the actual seed cost, because that interseeding pass is already covered as part of our weed management program; it’s a pretty obvious choice to drop it down.”

OSCIA program director and scientist Angie Straathof said part of the organization’s mission is to encourage stewardship by farmers connecting and learning best practises from other farmers.

The tailgate theme, she admitted, is a farm cliché—the most “classic, effective means of getting farmers together.”

“Despite the best intentions of researchers and government, there’s just a disconnect because what people want to try on the ground, in the field, doesn’t always match with the research priorities at a higher level,” Straathof said.

“So, we’re combining things that maybe are kind of common practices, or like Brett was talking about, introducing those mixes of cover crops.”

She insists there isn’t anything new under the sun happening here.

“It’s not reinventing the wheel but it is coming at a time when people are thinking and talking about soils differently and they’re really starting to understand when we look at climate change, and carbon cycling, and productivity and the economics of productivity, soils are really underpinning all of those,” she said.

Decades ago the goal was just keeping soil in the field, Straathof explained.

Now, it’s not only keeping soil where it belongs but also ensuring it’s healthy and viable for the long-term.

The thinking around soil has evolved from something inert simply holding plants, to something which can be maintained and enhanced, Straathof said.

She loves seeing what she calls the “aha moments” among farmers.

“You can tell from the types of questions they’re asking that their thinking is evolving and that’s really satisfying because this isn’t an industry that can put its feet up,” she said, adding the more intricate questions being asked signal “the needle is moving” for what can be achieved.

“Farmers are inherently curious and committed people, so they’re going to keep pushing the envelope of wanting to understand better what’s going on in their fields,” Straathof said.

Happy with the turnout, Straathof said, “You could tell just from the discussion people were understanding and respecting what Brett’s trying.

“He’s such a great farmer to have involved in the program because his enthusiasm is just so infectious.”

For more information on ONFARM or the OSCIA, visit: osciaresearch.org/onfarm-applied-research/.