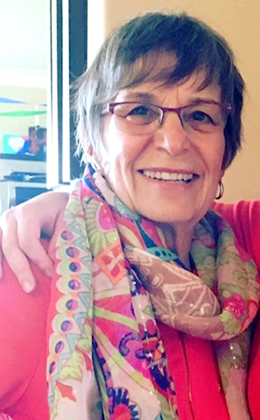 On December 2, 2022, Karen Anne Welch (née Shankowsky) passed away in her favourite community of Elora, Ontario. Karen was born on May 26, 1946, in Port Arthur (now Thunder Bay) Ontario to Ruby and Harry Shankowsky. As a teenager, Karen was determined to use education to give her the freedom and opportunity to leave small-town northern life. She excelled in her scholarly pursuits and would go on to graduate from the University of Toronto with a BSc in Food Science, plus eventually a Master’s Degree in Education. After a short stint at the Kenora hospital as a dietitian, Karen realized she wanted to teach. Beginning with high school biology and eventually specializing in special education, Karen’s career took her to various schools in Toronto, the Trillium School for students with learning disabilities in Milton, and even the American School of Paris in France. Karen would go on to various leadership roles as a Vice Principal at College Heights Secondary School and at the Erin District High School.  She would then go on to become the Principal at Centre Wellington District High School (CWDHS). Nothing made her prouder than her students and ensuring their potential and success. Karen took great pride at strengthening her community, involved in multiple volunteer and Board roles ranging from the Adjudicator of the Township Awards, Rotary Club of Fergus Elora, Habitat for Humanity, Wellington Community Services Advisory Board and the Elora Centre for the Arts. She also established the Karen Welch Community Leadership Award (CWDHS). Yet her happiest moments were spent surrounded by her family sharing a meal and drinking Prosecco. She prided herself on being a grandmother,and loved nothing more than causing silly mischief playing with her grandkids. Her passing in early December is no coincidence, as she was committed to always avoiding Canadian winters. Our wish is to remember her with the sun on her face, laughing over a glass of wine, wearing red, donning fabulous heels, and dancing in her lovely curated garden. Her family wishes to recognize her husband, Bryan, who was tirelessly devoted to supporting her in her later years. You went above and beyond! Her family is also deeply grateful to her incredible team of caregivers (in no particular order Andrea, Barb, Brenda, Sarah, Delcy, Suzanne, Donna, Callie, Kenzie, Jenny, Evelyn, Debbie, Anna, Lynn, Barb and Gloria), Dr. Incitti and all the Groves Hospital nurses. Karen is survived by her mom, Ruby, siblings Donna (Birch, Terra), Dan (Anne, Jenny, Evan) and Kevin Shankowsky (Lorna, Adrienne, Justine) her daughters Krista (partner Pete), Elissa (husband Sean), Kayla (husband Andrew); and grandchildren Halen, Quinlan, and Sloane. She was also appreciated by Lynda (John, Charlotte and Craig), Jennifer (Jean, Felix, Catherine, Sara), and Ken (Barb), and her first late husband Randy Scott. Friends, neighbours, and colleagues will be warmly received at a celebration of life on December 17th in Elora. To RSVP and for location details please contact: karenscelebration2022@gmail.com. Donations can be made to the Fergus Elora Rotary Foundation (Hospice Fund). Notes of sympathy can be made at the Graham Giddy Funeral Obituary page: https://www.grahamgiddyfh.com