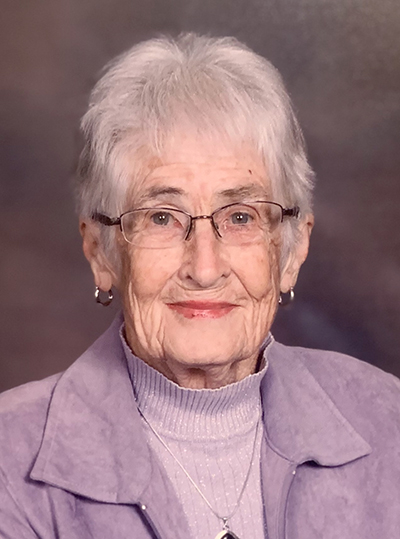 of Palmerston passed away peacefully at Royal Terrace on Tuesday, September 7, 2021 in her 95th year. Blanche was born on June 21, 1927 to parents Cheavins and Mary Judge in Albion Township in Peel County. She is predeceased by her husband Bob in 2011. Blanche is survived by Bob (Debbie) of Holland Centre, Brian (Theresa) of Aurora, Brent (Tracey) of Arthur Township and Brenda (Kevin) of Minto Township. Predeceased by daughter Beth Anne in 2018. She is also survived by son-in-law Rod Kidnie of Arthur Township and grandchildren Shane (Kristine) of Palmerston, Alicia Wanless and Michael Berk of Spencerville, Erika (Scott) Walls of Drayton, Andrea Kidnie and Daniel Abdelmassih of Guelph, Jacqueline Kidnie and friend Dzevat Jakupi of Guelph, Jennette and Mike Feurstein of Listowel, Kelsey (Adrian) Campbell and Wade Pfeffer of Palmerston; Jeffery and Madeline Wanless of Aurora, and 9 great grandchildren. Sister to Glen (Sherry) Judge and Jack Judge from Cheltenham and sister-in-law to Bruce (Donna) Wanless of Palgrave. Predeceased by her sister Helen Leslie and brother-in-law Bob Leslie, and her brother Murray Judge and sister-in-law Noreen Judge. Bob and Blanche bought a farm on the 5th of Minto in 1960 where she continued to live until she was 91 years old and prided herself on still cutting her own lawn and maintaining a garden. She was very active in the community where she was involved in the Palmerston United Church, Palmerston Agricultural Society and was a lifetime member of the Carry-on Womens Institute. Teaching was a passion of Blanches and supply taught at Minto-Clifford Public School until she was 65 and was also a private tutor. A Memorial Service of Remembrance was held in the Palmerston United Church on Friday, September 10, 2021 at 1:00pm. Please visit www.heritagefuneralhomes.ca to
view Blanche’s service. Interment in Harriston Cemetery. As expressions of sympathy donations to Palmerston Hospital Foundation or the Heart and Stroke Foundation would be appreciated by the family. Arrangements entrusted to the Heritage Funeral Home, Palmerston.