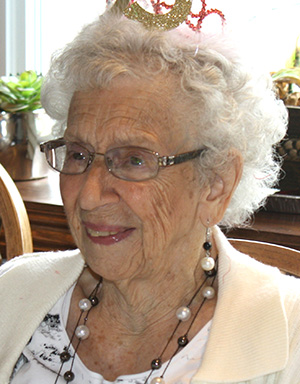 Pauline Arley (Murray) Walker of Royal Terrace Palmerston, and formerly of Harriston, passed away at Palmerston & District Hospital on Sunday, May 17, 2020, in her 97th year. Wife of the late Mervin Walker. Mother of Garry and Charlotte Walker of Windsor, and Murray and Gail Walker of Mississauga. Grandmother of Allison, Stephanie & Keith, Jason & Julie, Adam & Jacqueline, and Erin & Andrew, great-grandmother of Riley & Breann, Josie, Zoey, Amelia, Phoebe, Maxwell, and Mackenzie, and great-great-grandmother of Avery. Predeceased by her great-grandson Justin, and by her sister June Dukes and husband Walter. Pauline was a longtime member of Harriston United Church. She was an avid curler, and she enjoyed watching the Blue Jays and the Maple Leafs. Pauline’s family would like to thank the staff at Royal Terrace for the care and concern for Pauline over the past eight years. A family funeral service was held at Hardy-Lee Funeral Home, Harriston on Tuesday, May 26, with interment in Harriston Cemetery. Memorial donations to Harriston United Church would be appreciated. Online condolences may be left at www.hardyleefuneralhome.com