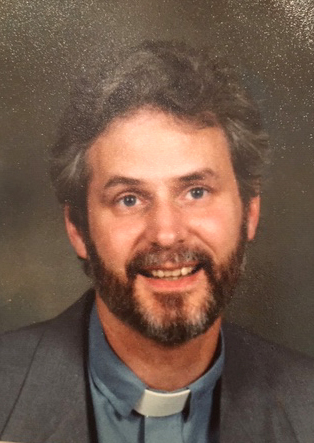 The Rev. Canon Dr. Walter Bryce Vipperman (“just call me Duke”) passed away of cancer at Hospice Wellington on Friday, January 3, 2020 while listening to “It is Well with my Soul”. He will be deeply missed by his beloved wife Deborah, his loving children, daughter Donovan Banerjee (husband Ross), sons John (wife Danielle Lamoureux) and Michael, and his grandson Connor to whom he was Grand Duke. He also leaves his dear sister Barbara Christman of Philadelphia, and his sweet Sheltie Ceilidh. Duke was born and raised in West Virginia, where he lived until finishing a philosophy degree. He was a product of the turbulent 60’s. A would-be rocker and occultist, he was once called “the freakiest man”, evangelist John Guest had ever met! By God’s grace, Duke responded to an invitation to make Christ the Lord of his life in 1971, and this began a gradual but radical transformation of his life. He first became janitor at John Guest’s church in Sewickley, Pennsylvania and avidly absorbed the Christian teaching he received there. He did youth ministry in Pittsburgh, Quebec City and Fairfax Virginia before entering Trinity Episcopal School for Ministry, from where he received an MDiv in 1983 and later a D.Min. in 2007. Duke was ordained in London, Ont. in 1983 and served at St. George’s, London, Trivitt Memorial Church in Exeter, Ontario along with St. John’s by the Lake, Grand Bend, Little Trinity Church in Toronto and finally The Church of the Resurrection, Toronto. In his “rewirement” he served at Trinity, Durham and also continued to be a sought-after mentor to many parishes, having been a Missional Coach for the Diocese of Toronto. Duke served in many other capacities and was a gifted teacher, preacher and pastor. He also was an incredible musician with a collection of at least 30 instruments. He loved serving God & people. He encouraged others to exercise their gifts in many ways, and was open to new ways of doing things, always thinking outside the box. Duke was a companion of the Northumbria Community, and helped found its local expression in the “Carrying Place”. Duke loved God, his family, his many friends and neighbours, and embraced any opportunity to serve. As one person put it, he was “the real deal”. We will be forever thankful for the myriad ways he touched and enriched our lives. Duke’s life will be celebrated on Saturday, January 11, 2020 at The Church of the Resurrection, 1100 Woodbine Avenue, Toronto, Ontario with visitation from 1:00 – 2:00pm, service at 2:00pm, followed by a reception. If desired, memorial donations may be made to Hospice Wellington, Groves Memorial Community Hospital, or The Church of the Resurrection, which went through its own “resurrection” when Duke went there in 2000 and built it up by God’s grace into a thriving & healthy parish.