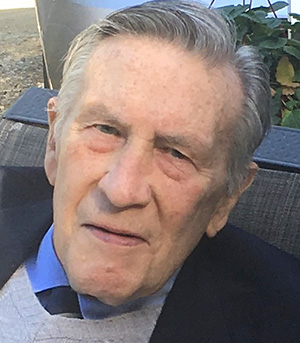 It is with great sadness that we announce the peaceful passing of our father on May 16, 2020. Born December 14, 1934 in Port Glasgow Scotland. Our dad taught us many things: how to swim, sail, debate, the art of sarcasm, and to be proud of and enjoy our Scottish heritage. He was an active volunteer of the Fergus Scottish Festival for over 50 years. During this time he was proud to serve in many capacities including multiple terms on the board of directors, President, Treasurer, Chair and was well known as concessions manager for many years. He was also a member of The Rotary Club, Junior and Senior Chamber, and coached many minor sports teams over the years. He was a Founding member of the Belwood Lake Sailing Club, himself learning to sail by the age of 5 at his summer home on the Isle of Bute, Scotland. He taught his family a duty of volunteerism and giving back to the community, which has continued through 3 generations to today. We will fondly remember his stories of what it was like to grow up during WW2 in Scotland, and his tales of serving in the British RAF in Egypt. He immigrated to Canada in 1957, and met our mother Maureen (nee Bradley) when he hired her at the Royal Bank in Toronto in 1960. They married May 19th, 1962, and he died 3 days short of their 58th wedding anniversary (since he managed to get out of having to buy her a gift, mom say she’s going to buy herself whatever she wants). They first moved to Fergus in 1967 when he was hired as the branch manager of Waterloo Trust, and was tasked with building the Fergus branch which you see today as TD Canada Trust. He continued his career in banking until his retirement from The Bank Of Montreal. He was a fantastic pianist, and he filled his home with music until he could no longer play. He leaves behind 4 children: Fiona McFadden, Maureen Thoms-Richardson (predeceased James Richardson), Robert Thoms (predeceased Anna Ellis), Megan Thoms-McDougall (Scott McDougall). He enjoyed having fun with his 8 grandchildren, Kathryn Curwen (Micheal Curwen; Lancaster, England), Mikeala Cowper, Sydni Cowper, James Richardson, Charles Ellis Thoms, Cheyenne Thoms, Malcolm McDougall and Molly McDougall, as well as his great granddaughter, Juniper Thoms. He will be so dearly missed, but we are glad he is no longer in pain and can now enjoy a drink with the rest of his friends and family who have gone before. Please raise a glass and say a toast to him. As he would have said: “Sláinte!”