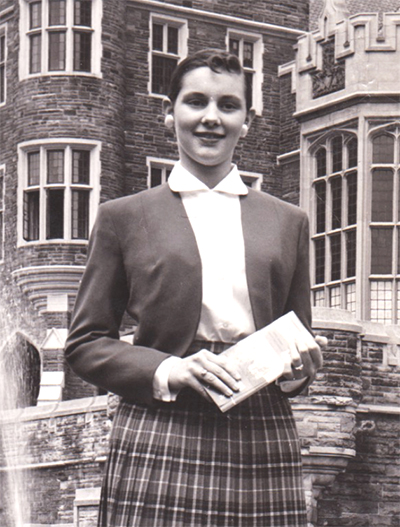 Died peacefully in her sleep at the age of 86 in White Rock, B.C. Alice was predeceased by her beloved husband David Strangway in 2016. She is survived by her 3 children and their spouses Richard and Salina Strangway, Susan Strangway and Weave Cleveland, and Patricia (Strangway) and Blair Forrest, her 5 grandchildren Tyrone and Spencer Strangway, Brodie, Bryn and Brooke Forrest, and her small dog Puff. Alice was known for her sharp intellect, quick wit, artistic eye and ardent love for her family. With an enduring talent for poetry and music, Alice, “Allie” to close friends and family, was the life of the party, often regaling guests with lively piano playing (Scotland the Brave comes to mind). Born on March 22, 1935 in Fergus, Ontario, Alice was the 6th of 7 children to Nora and Omer Gow. She is predeceased by older brothers James, George and Robert Gow, brother in law Donal McKeown, sister Mary Gow, and sister in law Winona Gow. She is survived by sisters Marion McKeown and Ruth Borras, brother in law Angelo Borras, sister in law Zillah Gow, and numerous nieces and nephews and great nieces and nephews who lovingly referred to her as “Auntie Allie”. Alice, David, Alice’s siblings and their spouses were close friends, spending many convivial times together over the years. Alice graduated high school as class valedictorian in Fergus, Ontario and went on to study history at Victoria College, University of Toronto, where she met and married her husband of nearly 60 years, David. Alice made lifelong friends living in residence at Victoria College’s Annesley Hall and she always reminisced fondly about that time. After graduating university, Alice became a secondary school teacher in Toronto at York Mills Collegiate, The Toronto French School and Branksome Hall. Alice was known for her excellence in teaching and specifically for preparing grade 13 students academically for university. At Branksome Hall, Alice shared her musical talent playing hymns for the school during morning Prayers. In 1985, David became the President of the University of British Columbia and they moved to Vancouver. From 1985 to 1997, Alice undertook the busy position as wife of the UBC President, which involved, in part, hosting numerous (often daily) social events at the Norman Mackenzie House. Despite the demanding schedule, Alice was the consummate hostess, always greeting guests and visitors warmly. A celebration of life will be held at a later date. Flowers gratefully declined.