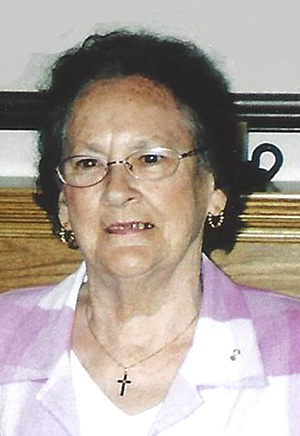 Of Arthur passed away peacefully at Hospice Wellington, Guelph on Saturday, September 12, 2020 in her 97th year. Beloved wife of the late Nick Schmidt (1989). Cherished mother of Sharon Walker of Kitchener, Terry and Brenda Schmidt of Kitchener, Rob and Lynn Schmidt of Arthur and Shawn Schmidt and Clinton Ridgeway of Toronto. Dear grandmother of the late Darryl Walker, the late Colleen Walker; Karma and Derek Papastergiou of Kitchener; Corey and Stephanie Schmidt of Arthur, Kendra and Zeke Verbeek of Badjeros, Kyle and Daniella Schmidt of Arthur. Great grandmother of Christian, Anthony, Conner, Addison, Paisley, Carter, Brody, Kylie and Olivia. Sister of Catherine and Reg French of Guelph. Sister-in-law of Annie Tone of Arthur. Fondly remembered by her nieces, nephews and friends. Predeceased by her parents Ed and Irene (Fitzpatrick) Tone, and brothers Edwin, Cyril, Basil and Frank Tone, sister Helen Hopkins and son-in-law Cliff Walker. The family received friends at the Crawford Funeral Chapel, Arthur on Tuesday, September 15, 2020. A private family Funeral Mass was celebrated at Sacred Heart Roman Catholic Church, Kenilworth on Wednesday followed by interment in Sacred Heart Cemetery, Kenilworth. As expressions of sympathy donation to Sacred Heart Roman Catholic Church or Hospice Wellington, Guelph would be appreciated by the family.