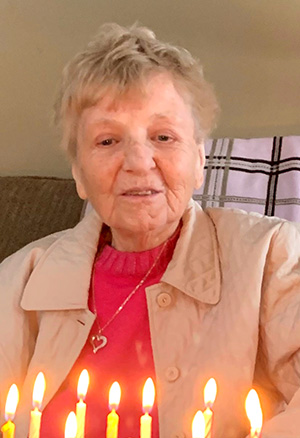 Our beloved Doris left us on October 8, 2020 in the early afternoon, after a hard fight to recover from emergency surgery at the Guelph General ICU. With devoted care, she battled through and was making progress, when suddenly and unexpectedly, her poor tired heart gave out. Her family is grieving, especially her dear husband of 62 years George Putz, her daughter Sylvia Putz and her sons Martin and Andy Putz, and their spouses Jeff Preyra, Beth Putz and Carol Putz, as well as her eight grandchildren. Brother Dieter Zenkner sends his sad goodbye as well as sister-in-law Renate Ritter, and the rest of the extended family in Germany. Doris was never happier than with her family. Her grandchildren Nathan, Madison, Lucas, Matthew, Eric, Isabel, Emily, and Adrian—were her pride and joy. She loved all of them without end, and they responded in kind. Her children were blessed to call Doris their mother and to have her for so many years of support and unconditional love. Doris was the love of George’s life. He always said that everyone who met Doris loved her for her gentle and kind ways. She loved him back fiercely and was devoted to him. They enjoyed a long and loving union. Doris benefitted from the happy company of long-time friends and neighbours and her in-laws. Many of their circle of friends in the German immigrant community send love and condolences. The Preyra family of Toronto and the Prior family of Guelph as well as the Knapper family send their deepest sympathy, as do Doris and George’s neighbours in their Hillside Drive community. Doris also enjoyed many years of family fun and good neighbourly relations with the cottage community on the Saugeen Bruce Peninsula. Doris and George were avid hikers and nature lovers in this special place. Doris worked for the University of Guelph Food Services for many years and was a friendly familiar face for her co-workers and the many students and professors who regularly dropped by for food and a hello. At home, she made fantastic jams, pickled and canned, cooked and baked, and decorated many beautiful birthday cakes. She grew beautiful flowers and was a voracious reader, and enjoyed choral music, especially the songs she sang as a girl in Catholic school choirs. She belonged to the Holy Rosy Parish in Guelph. She enjoyed coffee shops, and dinners at her favourite Italian restaurants and memorable vacations, including Alaska and Hawaii. Doris was born in 1937, in an ethnic German area called Sudetenland in what is now the Czech Republic. When Doris was seven years old, her family as well as millions of other ethnic Germans who lived in Eastern Europe were expelled from their homes and communities after the war. Doris’ family was exiled to East Germany. They lived there for many years before escaping to the West and settling in Bavaria when she was a teenager. It is here that she and George started corresponding—George found a devoted penpal in Doris. George had already made the leap to Canada and described it to Doris, who was fascinated. The two writers eventually met, married and moved to Guelph, Ontario, where Doris and George made their lives together. Doris was truly and deeply loved by many people. She will be dreadfully missed. Resting at the Gilbert MacIntyre and Son Funeral Home, Hart Chapel, 1099 Gordon St. Guelph. A funeral mass was held at Holy Rosary Church, 175 Emma Street, Guelph on Wednesday, October 14, 2020 at 10:30am. If so desired and in lieu of flowers, memorial donations to the Guelph General Hospital would be appreciated by the family. Online donations and condolences can be made at www.gilbertmacintyreandson.com