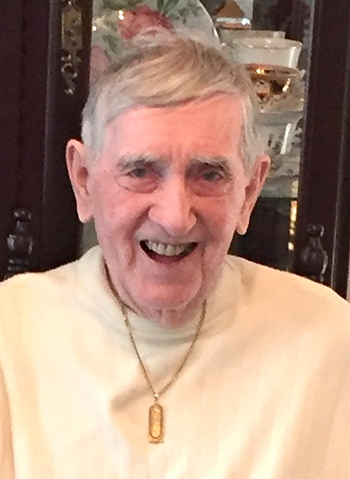 of Mount Forest and formerly of British Columbia passed away peacefully at the Caressant Care Nursing Home, Arthur on Friday, September 10, 2021 in his 94th year. Beloved husband of the late Irene (Revelle 2009). Dear father of Stephanie and Juergen Jantsch and Suzanne Moore all of British Columbia. Grandfather of Jennifer and Nicholas. Son of the late Guy and Stella (Kenifick) Moore. Brother of the late Mary Moore, the late Teresa Roberts, Bert and Helen Moore of Mount Forest, the late Jim and Marilyn Moore and the late Bernard Moore in infancy. Fondly remembered by his many nieces and nephews. Jack left home at the age of 16 to pursue his career in Optometry, starting in Toronto and finishing his career in Tsawwassen, British Columbia. Jack and Irene were avid travellers and during their 57 years of marriage they visited over 70 countries. There was many a night that a good game of cards and companionship with friends and family kept things light. To honour Jack’s wishes cremation has taken place. A Memorial Mass will be celebrated in Sacred Heart Roman Catholic Church, Kenilworth on Saturday, September 18, 2021 at 11:00am followed by interment in Sacred Heart Cemetery, Kenilworth. As expressions of sympathy donations to Sacred Heart Roman Catholic Church, Kenilworth would be appreciated. Arrangements entrusted to the Crawford Funeral Chapel, Arthur.