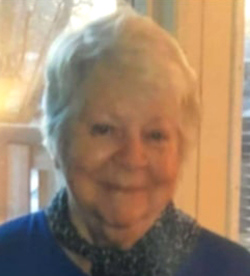 Joy passed away at Oakville Trafalgar Hospital on Friday, July 24, 2020 in her 82nd year. Originally Joy was from Fergus, Ontario where she attended Shand’s Public School, Fergus District High School and The Guelph Business College. She later used the skills she learnt and worked most of her career in the Toronto area as a key punch operator. She is survived by her son Steven (Mo) and her daughter Dianne McIntosh as well as her sister Alinda Morrison (nee Davies)(the late Dennis Morris) Terry Davies, Sandra Davies (the late Gerald). Predeceased by her sister Gail Trask (nee Davies)(Vern) and her parents Fred Davies and Rose Constant. Joy was a kind and giving person who will be missed my many nieces and nephews as well as family and friends. A grave side service was held on Monday, July 27 at Glen Oaks Cemetery, Oakville Ontario.