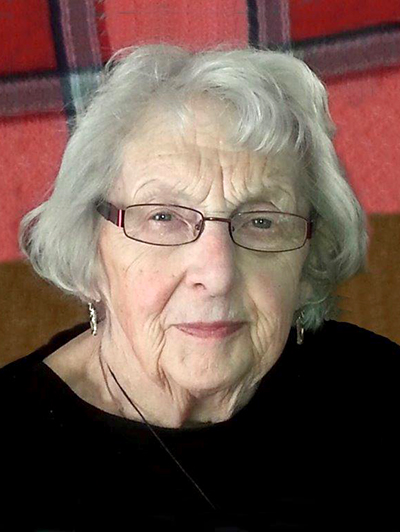 Jessie Isabell (Currie) McCutcheon of Harriston passed away at the Royal Terrace, Palmerston, on Friday, September 10, 2021, in her 94th year. Wife of the late James “Jim” Ellison McCutcheon (1993), and loving mother to Kim McCutcheon of Toronto, Margaret McCutcheon & Sharad Kerur of Toronto, and Alana McCutcheon of Bobcaygeon. Much loved grandmother of Diarmuid, Rory & Jen, Colin, Douglas, and Rachel & Will. Predeceased by her parents Mary Catherine (Gillies) & Neil Currie, and her brother Bruce. Cherished sister of Jack Gillies and his wife Sandra. Jessie Isabell Currie was born on April 15, 1928, on a farm near Duntroon, Ontario. Isabell often spoke fondly of growing up in the Pretty River Valley. That was a seminal part of her life. As a young woman she worked at Bell Canada in Collingwood as an operator. This is where she met her very good friend and future sister-in-law Agnes Spooner, who introduced her to the love of her life, Jim. Isabell and Jim married in 1951, living first in Nottawa before moving to Mount Forest, and eventually settling in Harriston, where they raised three daughters. Isabell worked along side Jim in their fuel oil business. Once Jim retired, she spent many years working as a VON homemaker and met wonderful people doing that work. Over the years, Jim and Isabell had many pets, including Danny, her beloved Schnauzer, who took many road trips with her after Jim’s death. Isabell and Jim travelled across Canada, making many friends and memories along the way. Isabell continued to travel on her own. Favourite trips included visiting family on Quadra Island, B.C., and spending time at Jack and Sandra’s cottage at Miller Lake, on the Bruce Peninsula. Most notably, Isabell was a caring woman, who was a wonderful aunt and a dedicated friend. Throughout her life, she had many heartfelt friendships, including those with her sisters-in-law, people at her church, and her sisters in service with the Rebecca Lodge. Isabell was an avid Euchre player, with a keen competitive edge. She passed this love of cards onto her children and grandchildren. She was a devoted gardener, who loved nature and feeding birds in her backyard. Isabell was a nurturer at heart, who took great pleasure in caring for others. She was a truly wonderful hostess to anyone who visited her home, always making sure they were well-fed. She had a great wit and there was always much laughter around her table. She loved making her nine-day pickles, chili sauce, raspberry jam, and her spectacular Nanaimo bars. Isabell was compassionate and loving. Everyone in her company felt welcomed, loved, and cared for. Even in her last days, she was most concerned that her daughters would be okay. Isabell had so many qualities and interests that it is impossible to capture the fullness of her life well lived. Isabell’s legacy to her daughters is showing them how to be strong, independent, and loving women. Visitation was held at the Hardy-Lee Funeral Home, Harriston, on Sunday, September 12 from 2:00 to 4:00pm. Interment in Harriston Cemetery. Memorial donations to Palmerston & District Hospital would be appreciated. Online condolences may be left at www.hardyleefuneralhome.com