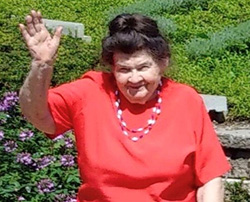 Greatly cherished by her family, Dorothy Elizabeth MacQueen (nee Wright), passed from her earthly life’s journey into the presence of her Lord and Saviour on May 17, 2020 in her 94th year. Dearly loved wife of the late Donald MacQueen (1987). Loving mother of Paul MacQueen, Jean (Rob) Ferguson, the late John MacQueen (2001) and daughter-in-law Debbie MacQueen. Proud grandmother of Anna MacQueen Shannon (Drew), Amy MacQueen, Anita Brunsting (Joe), Kara-Lynn Bowers (Rob), Nathan Ferguson (Dara), Joanna Rushlow (Adam), Megan Herrington (Paul), Wesley MacQueen (Rachel) and Kathleen Stranks (Ed). Treasured by her 20 great-grandchildren, her nephews and nieces. Predeceased by her parents Wesley and Beatrice Wright and brothers Harold and Jim (June) Wright. The family wishes to express their great appreciation to the caregivers at Wellington Terrace in Fergus and the Elliott Community (Ellington Suites) in Guelph for their exceptional care and compassion. A private funeral service for Dorothy MacQueen was held at Brian E. Wood Funeral Home (519-367-7492), on Saturday May 23, 2020 with interment in Annan Cemetery. The funeral service was streamed online. If so desired, the family would appreciate donations to Cystic Fibrosis Canada, Groves Memorial Community Hospital in Fergus or Mission Aviation Fellowship, as an expression of sympathy. Messages of condolence may be sent to the family on-line at www.woodfuneralhome.ca