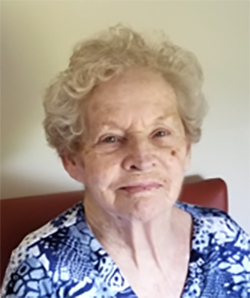 1933-2020 Alice passed away on January 7th in her 87th year. Alice was born in St. Georges, NB, in 1933. Beloved wife of Ross and mother of Brian, James (Lone) and Karen (Michial Johnson), seven grandchildren, and eleven great grandchildren. Alice was the last surviving member of parents George and Anna Henry, and nine children growing up in Milton Ontario. Ross and Alice were married over 66 years living in Toronto, Weston and Fergus. Uniquely, they originally met by wrong phone number. Despite a serious car accident in 1994, Ross and Alice travelled virtually “around the world” including 11 cruises, 19 land trips, 18 years in Florida and numerous ski trips across Canada. While raising their family, they camped, golfed, skied and curled together. A private family graveside to be held at Belsyde Cemetery. A celebration of life will be organized at a later date. Arrangements are entrusted to The Graham Giddy Funeral Home, 280 St. David Street South, Fergus.