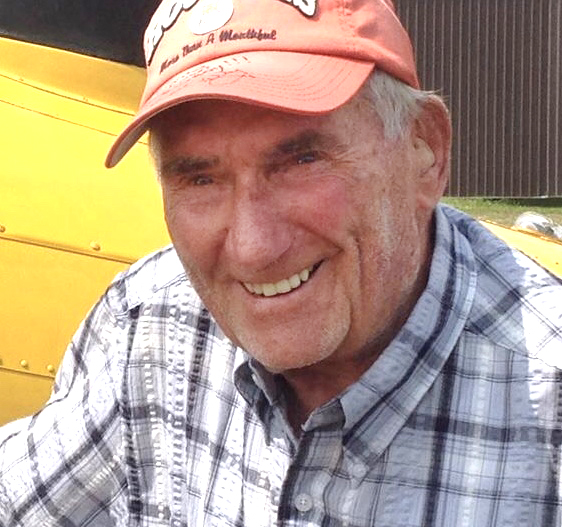 Peacefully, with his wife Helen at his side, Christel Juergensen passed away at home on March 28, 2020. He will be dearly missed by Helen, his sons Hans (Cathy McNabb), Carl (Brandy), and his grandchildren Max, Adam, Rhys, Cale, Jillian and Evan. He will be equally missed by his stepchildren Doris Arora (Ratish), Gary Fuchs, Guido Fuchs (Christina), his grandchildren Matthew, Teejay, Anil, Nick, Bradley, Emily, Jasmine, Benjamin and Thomas, and his great grandchildren Ryker, Mason, Jace and Hana. Christel was a hardworking and dedicated farmer whose resilience and passion was understood by all who knew him. He had a deep love of flying, an interest sparked by his father and one which he has also passed down to his sons and grandchildren. His life is best described in the following biographical poem, written for his 96th birthday celebration:

On August 4th 1923 the world got richer by one
When Christel’s parents welcomed their second son
He grew up in Hamburg, Germany, a big city in the north
Politics were changing, he went to the military, of course
Glider flying, marching, power flying too
He also flew the Junkers Ju-52
Destination, Canada, after the war, working in a factory and saving some cash
They bought a small farm in Plattsville with their hard-earned stash
They flipped that farm and then bought another
And that’s where they had me and my brother
Growing up on a dairy farm, Opa taught us a tonne! We learned to: Milk cows / Drive a tractor / Pick stones / Cultivate / Plow / Cut hay / Rake hay / Bale hay / Throw hay / Stack hay / Feed hay / Scrape the barn / Scuffle corn / Harvest corn / Eat corn / Feed the cows / Feed the calves / Fork manure / Haul manure / Spread manure / Smell like manure / Birth calves / Feed calves / Draw calves / Bury calves / Mix cement / Build barns / Wire barns / Fix fences / Turn off the lights / Respect our neighbours
Then on Sundays we went to Air Sailing of which Opa was a founder
He taught us how to fly gliders, “Stay smooth on the landing, “don’t pound’er”
He taught us flying in his own Christel fashion
We are so grateful that he passed on his passion
Helen and Opa married in 1988 and together they:
Built a runway / Hoed evening primrose / Grew soybeans / Grew corn / Grew asparagus / Built a house / Ran a bed and breakfast / Built a hangar / Flew south and to Vancouver / Joined the Reform Party / Traveled the world / Welcomed 15 grandchildren / Enjoyed their neighbours / Loved one another.

The family would like to thank the compassionate PSWs who spent countless hours caring for Christel in his final weeks. As expressions of sympathy, donations may be made to Groves Memorial Hospital in Fergus, ON or The Ivey Eye Institute in London, ON. A celebration of Christel’s life will take place at a later date.