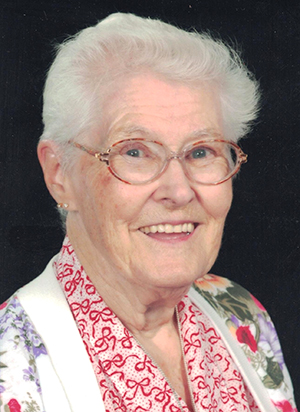 Peacefully passed away, at Eden House Care Facility on Wednesday, February 10, 2021, in her 100th year. Predeceased by her husband Gordon (1994) and granddaughter Anna-Liisa Ropponen (2015). Loving mother of Barbara Ropponen (Colin) of Rockwood, and Leonard Hunt (Valerie) of MacTier. Dear grandmother of Cassandra Ropponen, Jorge Mai (Terry), Sharyse Hunt, Dustyne Hunt (Brenda Lee), 3 great-grandchildren and 2 great-great-grandchildren. Catherine and Gordon were married in 1943 and spent most of their married life posted to air force bases but they still managed to own many boats. One of the last was a 60 foot converted Trawler they called the Yorkshire Lass that they sailed down the St. Lawrence to Toronto and from Toronto via the inland water way to Florida. After Gordon’s passing Catherine drove to their place in Florida alone except her Doberman Zackary until her late 80’s. She discovered cruising about that time and, with friends from Florida took a cruise a year for many years. Catherine was independent and adventurous and did things her way. Cremation has taken place. Due to Covid a memorial service will be held at a later date. Contributions in her name if desired, may be made to St. John’s Anglican Church, Rockwood or the Cancer Society. Arrangements entrusted to MacKinnon Family Funeral Home.