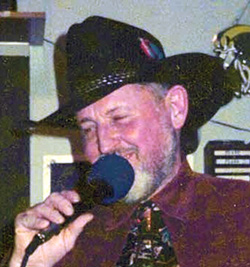 Jerrold Alexander Hewson, known to all as “Jerry”, passed away on September 26, 2020 in his 74th year. Surrounded by family as he passed, he kept his sense of humour until the very end. Jerry was the loving husband to Brenda (nee Scratch) for 40 years. Dear Step-Father to Laura (Ron) and Patti. Special Papa to Megan, Sam (Dave) and special Great-Papa to Olivia. He will be missed by siblings Marilyn (Larry), Ron (Dianna), Bob (Nancy) and Tim. Also survived by children Rhea, Deanna and Jerrold (Marta), 13 grandchildren, 7 great-grandchildren, nieces, nephews, extended family and friends. Jerry is predeceased by his parents Archie and Ruby, parent in-laws Jack and Millie and a step-son Peter. Jerry spent much of his younger years helping with his Dad’s restaurant- “Oruban’s”. He always had many stories to tell of his days helping with the restaurant and living in Orwell/Aylmer and St. Thomas. We also heard many stories about his days working for the United States Railroad – he had a particular interest in trains. Over the years, Jerry spent much time travelling with his wife Brenda. Over the past ten years, many wonderful memories were made spending the winter in Daytona Beach, Florida. Over their life they took cruises and visited many places which also bode many memories – Arizona, Jamaica and Aruba were some favourites. If you met Jerry, you would soon realize that he had quite the sense of humour and was always good for a laugh. Even in his final week, he “got us” more than once. He enjoyed good food and was especially proud and fond of all of Sam’s good cooking. Going out to eat was always something that he also enjoyed and had more than one favourite restaurant. During his last week we couldn’t get him enough ice-cream, which was his favourite dessert; we know that you’ll be getting your fair share up in heaven! Jerry enjoyed many activities – golfing, games, cards, cooking, gardening, colouring, painting – to name a few. He loved going to the mall to get kernels popcorn and going to the movie theatre with his family. Consider yourself lucky if you had the opportunity to hear him sing – an avid Country & Western fan, karaoke was a favourite pastime of his. Between singing at local bars (The Red Chev), down in Daytona or in the house – he found time daily to express his talent. Jerry spent many years volunteering at Meals on Wheels in Guelph and at the Guelph Food Bank. He was the absolute best Santa around – he spent many years as Santa at Stone Road Mall, for individual family gatherings and for various company Christmas parties. Papa – we love you and will miss you so much and will especially miss your huge hugs and kisses with your scratchy beard. The little four legged puppers will also miss you coming around with dog treats in your pockets for them. The family would like to extend a heartfelt thank you to the staff at Groves Memorial Hospital. Dr. Megan Williams, Nurses – Courtney, Courtney, Sarah, Katrina, Mel, Olivia, Carrie and Leann; your compassion and kindness did not go unnoticed and was very much appreciated in his final days. We would also like to thank the entire team at Heritage River Retirement Home for their care – especially to the dining team who Jerry always looked forward to chatting with and who he could always depend on for extra desserts. A celebration of life in the form of a Karaoke Bash will be held in 2021. As an expression of sympathy the family would appreciate donations being directed to The Alzheimer’s Society or The Groves Memorial Hospital.