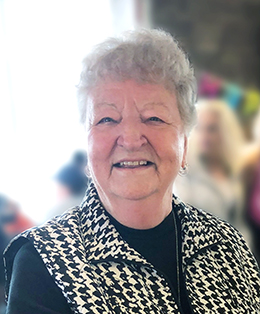 Of Palmerston passed away peacefully at the Palmerston and District Hospital on Sunday, September 25, 2022  in her 85th  year.  Beloved wife of the late James Hembly (2000). Cherished mother of the late Randy Hembly (1996), Rick Hembly and Jacqui Rideout of Cambridge and the late Jennifer Edwards (2002). Dear grandmother of Ryan Hembly, Craig Hembly; Alisha Hembly; Topher and Ashley Edwards, Candice Edwards and her fiancé Jesse Walton. Sister of Nancy and Glen Reed of Georgetown and Catherine and Len Sherrer of Waterloo. Fondly remembered by her nieces, nephews and friends. To honour Annie May’s wishes cremation has taken place. The family received friends at the Heritage Funeral Home, Palmerston on Tuesday, September 27, 2022 from 2:00 to 4:00 and 6:00 to 8:00pm. A private family graveside service will be held in Palmerston Cemetery. As expressions of sympathy donations to the Palmerston Hospital Foundation or the James Street United Church, Palmerston would be appreciated by the family.