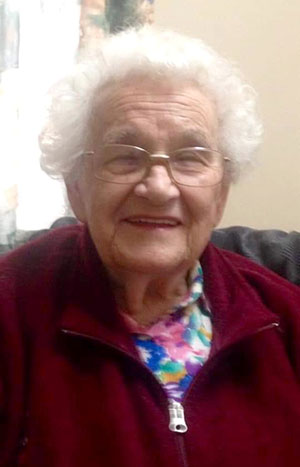 of Drayton passed away peacefully at Barnswallow Place on Monday, July 6, 2020 in her 90th year. Beloved wife of the late John Hahn (2002) for 54 years. Dear mother of Peggy and her husband Lewie Yantz of Cambridge, John Hahn and his wife Linda of Drayton, Barbara and her husband Larry Hoffer of West Montrose, Debra and her husband Larry Schill of Drayton, Steven Hahn and his wife Patti of Kitchener, George Hahn and his wife Carol of Southampton, Linda and her husband Jim Merkley of Drayton, Jeff Hahn of Manitoba, Cindy and her husband John Gleeson of Moorefield and Pam and her husband Terry Hessels of Alma. Fondly remembered by her 29 grandchildren 48 great grandchildren and four great great grandchildren. Sister of Gary Kraehling and his wife Janice of Kitchener. Predeceased by grandson Jason Gleeson, granddaughter Jolene Hessels, daughter-in-law Debbie, five brothers Joseph, Vincent, Douglas, Albert, and Donald Kraehling and sisters Gertude Smythe and Margaret McIver. A private family visitation was held at the Heritage Funeral Home, Drayton and Funeral Mass will be celebrated in St. Martin of Tours Roman Catholic Church, Drayton. As expressions of sympathy donations to the Alzheimer’s Society or Grand River Regional Cancer Centre would be appreciated by the family.