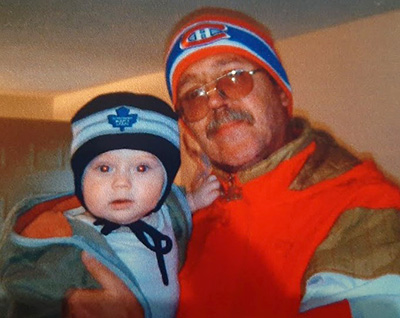 On the morning of April 11, Ian passed away peacefully at home, after a lengthy battle with Cancer. His wife was at his side and he had all of his family’s love surrounding him. He will always be lovingly remembered by his wife and daughter, 5 grandchildren, sisters, brother in laws, sister in laws, nieces, nephews and of course his friends. Ian was predeceased by his father and mother, Ted and Dorothy, as well as his older brother George. During his last few weeks at home, our family was able to gather around and reminisce with him. We all had some great laughs, got to listen to some of his life stories, reconnect with some of his older friends and enjoy some bittersweet family times. Ian was always there for his family, immediate and extended. His grandchildren will have lots of memories of him playing and laughing with them right until the end, always able to get a giggle, smile or high five from them. Ian was born and raised in Centre Wellington. He helped his family maintain schools and church buildings, the Fergus Post office and eventually worked for the township of Centre Wellington Parks and Rec. Department until his retirement. His roles at the Arena aided in community members having the use of a community swimming pool and ice rinks, set ups for The Highland games, dog shows and the lions leisure show among many other events. He played hockey with “the old timers” many years ago and if a hand was ever needed you could always ask him and he’d show up. Never one for sitting still for very long. Out of respect for his request there will be no official service or ceremony however at a later date we will be planting a tree in the community in memory of his life, where a few words will be spoken and friends and family can remember him. It was also his wish that instead of flowers and gifts, donations be made to London Health Sciences or McMaster Children’s Hospital as both of those organizations helped our family and he truly believed in what they were trying to accomplish. We as a family want to thank everyone who has reached out, sent their condolences and given their support during this season of Life. For those who gave their time to make sure Ian was able to attend his appointments, visit him at the hospital and at home and those who have continued to show their support going forward. We also want to say thank you to his home care staff that gave him the opportunity to stay at home throughout his final days. Ian will always be missed, but will never be forgotten!