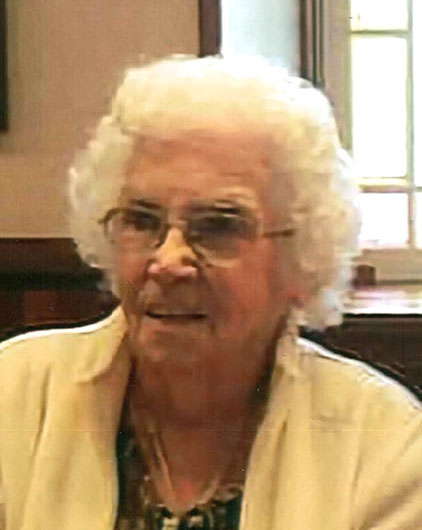 of Moorefield passed away peacefully at the Royal Terrace Nursing Home, Palmerston on Friday, December 6, 2019 in her 98th year. Beloved wife of the late Russel Ziegler (1956) and the late Julius Borth (1982). Dear mother of Michael and Judy Ziegler of Windham Centre, Katherine and Bill Cummings of Moorefield, the late George Ziegler (1995) and Sharon of Kitchener, Mary and John Petrik of Moorefield, Barb and Vaughan Doig of Moorefield and Russel Ziegler of Alberta. Loving grandmother of Jim (Nicole) Petrik of Eden Mills, Mike (Jen) Petrik of Guelph, Chris (Jennifer) Cummings of Rockwood, Jeff (Jessica) Cummings of Harriston, Alyson (Dave) Bahry of Delhi, Heather Ziegler of Simcoe, Jerime (Jen) Ziegler of Ilderton, Sara Ziegler of Kitchener, Dylan Doig of Korea, Andrea Rock of Moorefield and Brian (Ashley) Doig of Atwood.  Cherished great grandmother to her 27 great grandchildren. Loved sister of Freda Palmer of Hamilton, and Jim (June) Hyatt of Hamilton sister-in-law of Margaret Hyatt of Hamilton and Margaret Thomas of Guelph. Jean will be fondly remembered by her extended Ziegler and Borth families as well as by her nieces, nephews and friends. The family received friends at the Heritage Funeral Home, Drayton on Sunday, December 8, 2019 from 2:00 to 4:00 and 6:00 to 8:00pm. The Funeral Service was held in the Moorefield United Church on Monday, December 9, 2019 at 11:00am. As expressions of sympathy donations to the Moorefield United Church would be appreciated by the family.