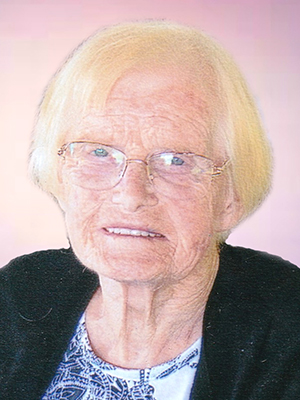 Ruth Mary (Reidt) Angst formerly of Clifford, passed away at Royal Terrace, Palmerston on Tuesday, January 12, 2021 in her 95th year. Wife of the late Gordon Angst, and mother of Linda and Les Stroeder of Harriston, Susan and Roger Burchill of Wroxeter, and Keith and Patti Angst of Bamberg. Remembered by her grandchildren Lisa and John Hope, Robbie and Ezra Westendorp, Cathy and Glen Malloch, Leslie Stroeder and John Meiske, Gilena Benninger, Brandi and Corey Hayter, Alisha and Mark Beitz, Blake and Leanne Angst, Trisha Angst, Jodi McInnis, Scott and Erika Walls, Becki and Rob Hamilton, and Ian Walls, and by 27 great-grandchildren. Sister of Marion and Arnold Dally of London, and Gerry and Wilbert Dally of Mildmay, and sister-in-law of Margaret Reidt and Shirley Reidt, both of Minto Township. Predeceased by her great-grandson Bentley, and brothers and sisters Sheldon Reidt, Nelson Reidt, Celeste Ferguson, Eileen Angst, Elmer Reidt, Arnold Reidt, Ken Reidt and Doris Oehring. Visitation was held at the Hardy-Lee Funeral Home, Harriston on Friday, January 15. A private family funeral service was held on Saturday, January 16. The funeral was recorded and the link is available online. We ask you to watch safely from your home. Interment in Clifford Cemetery. Memorial donations to Knox United Church, Clifford would be appreciated. Online condolences may be left at www.hardyleefuneralhome.com