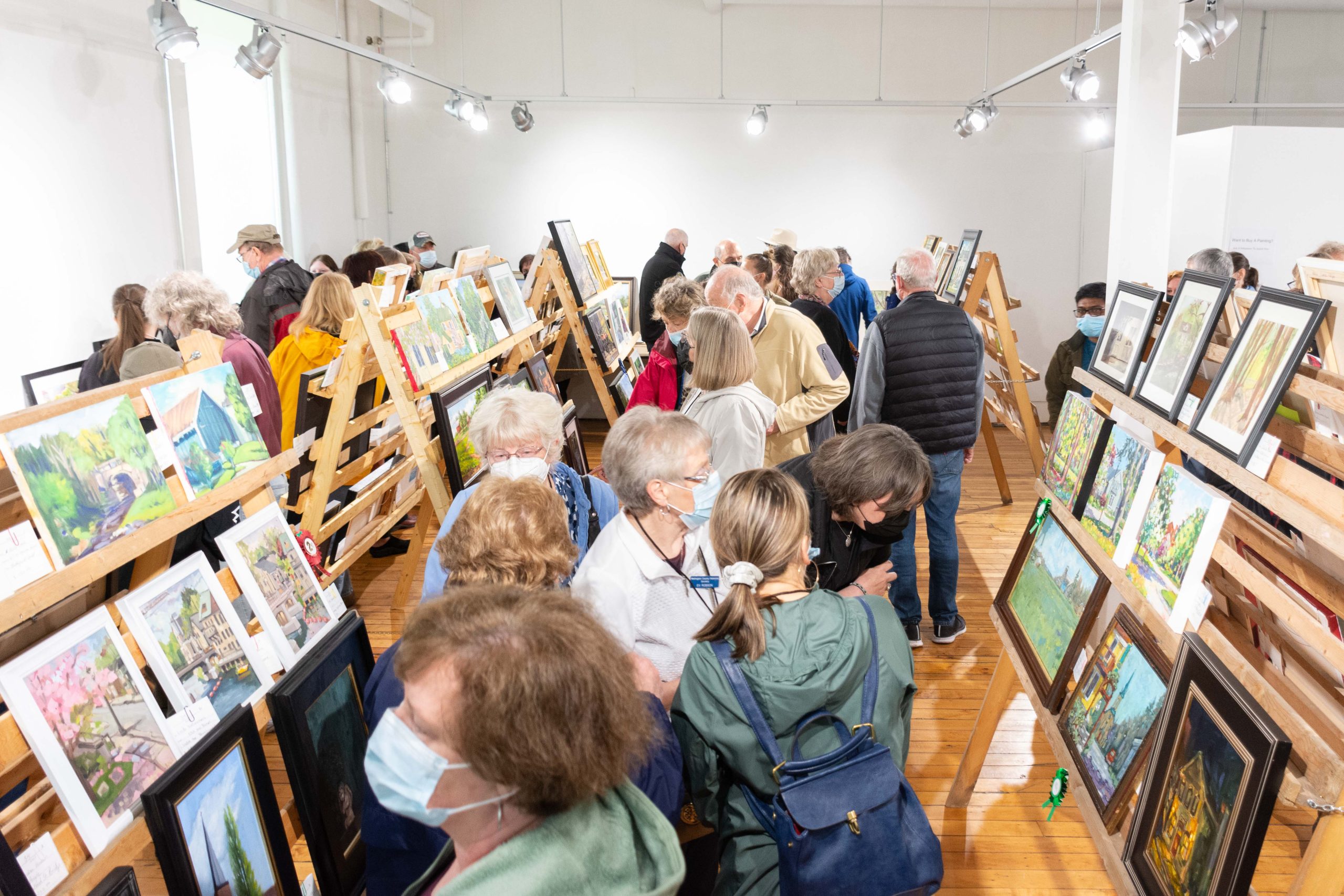 Artists and sponsors browse artwork displayed at the Elora Centre for the Arts created by artists from near and far during the Elora Plein Air Festival, which ran from May 19 to 22. Photo by Jordan Snobelen

ELORA – Canvases barely had a chance to dry before being displayed at the Elora Centre for the Arts on May 22.

Artists of all specialties came to Wellington County from across the continent to capture the county’s outdoor scenes in a variety of mediums during the fifth annual Elora Plein Air Festival.

Over 200 works were produced over three days by 70 artists, from May 19 to 21, culminating in an art “show and sale” on Sunday.

Show judge and artist Sam Paonessa spoke with participants before the centre opened to the public later that afternoon, contemplating their work and jotting his impressions into a notebook he would read from when presenting awards for categories such as best town, heritage, or agricultural subject with accompanying prizes ranging from $100 to $1,000.

Saskatchewan resident Greg Hargarten was the overall first place winner, receiving a $1,000 prize, presented by local realtor George Mochrie, for his depiction of the Handsome Devil Bistro’s outdoor patio, made on Friday evening over a couple hours.

Hargarten belongs to a collective calling themselves “The Men Who Paint.”

They travel the country creating plein air landscape work, but it was Hargarten’s first time participating in the festival.

In an interview following the award presentations, Hargarten said the plein air art form – essentially painting outdoors – provides artists an excuse to move beyond the studio and keep their chops up.

“There’s an immediacy to the paintings that is really special,” he said. “When you paint outside, there’s no mucking about, you don’t get a second chance.”

Since Beverly Cairns and Barb Lee started the festival in 2016, the art form has proliferated, according to Lee, capturing the minds and imaginations of artists the world over.

Lee, a woman pulled in many directions on Sunday, said Elora has drawn artists to its “villagey construct” and “amazing Scottish architecture” for ages.

“There’s so much scope, people don’t have to go far to discover what they want to paint,” Lee said.

Although she admitted to saying as much before, Lee believes this year’s show, after returning from a two-year hiatus, was the best yet, and called the work “astounding.”