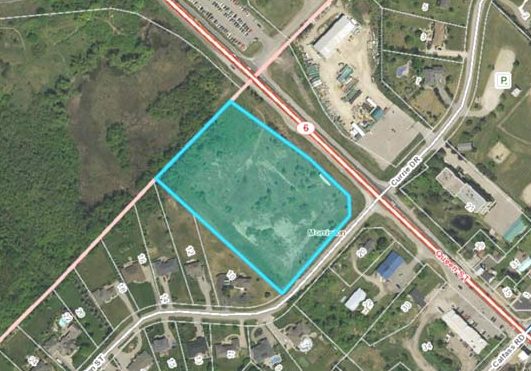 PUSLINCH – While just about everyone is happy to hear Dr. Manu Kaushik and his wife Pooja want to open a medical centre in Morriston, local residents are concerned about how such a centre would impact traffic on Highway 6 through the village.

The medical centre is proposed for the northwest corner of Telfer Glen Street and Highway 6.

On Sept. 22 Puslinch council heard a presentation by the Kaushiks, a delegation by resident Dan Kennedy, and comments from Wellington County staff and the Kaushiks’ planners.

Manu Kaushik said he has lived in Morriston for 20 years and has noted the lack of medical facilities in the community.

His own practice is located in Guelph, “but as a physician, I have a vision to serve the community of Morriston,” he told council.

The first phase of the plan is to build a 5,000 square-foot single-storey facility that would house four doctors and a pharmacy.

Phase two would see an expansion of the building to include other allied health professionals at the site.

Access to the parking lot would be from Telfer Glen Street, but Kennedy foresees a problem for traffic trying to head north from the medical centre onto Highway 6.

“It’s a fantastic opportunity and would be a great addition to the community,” Kennedy said.

“But traffic on Highway 6 has greatly increased. It’s already hard to make a left-hand turn. You can sit a long time trying to get out.”

Kennedy noted the traffic study for the medical centre was done during COVID-19 restrictions so he worries the study doesn’t reflect actual traffic volumes.

He also noted there is often gravel across the roadway at the intersection and water pools on the shoulder of Telfer Glen Street after rain.

“Traffic will likely improve after the Morriston bypass is done, but who knows when that will happen,” he said.

Julia Salvini, who conducted the traffic study for the Kaushiks, acknowledged the study was done in February when traffic was “depressed.”

But there’s an industry standard and she said she added 20% to the numbers, and they still fall below the Ministry of Transport’s threshold for installing traffic lights.

In the end, council gave site plan approval to the project but also instructed staff to write to the Ministry of Transportation asking it to:

Staff and councillors will try informal methods to achieve the minor road improvements before formally reaching out the the ministry.