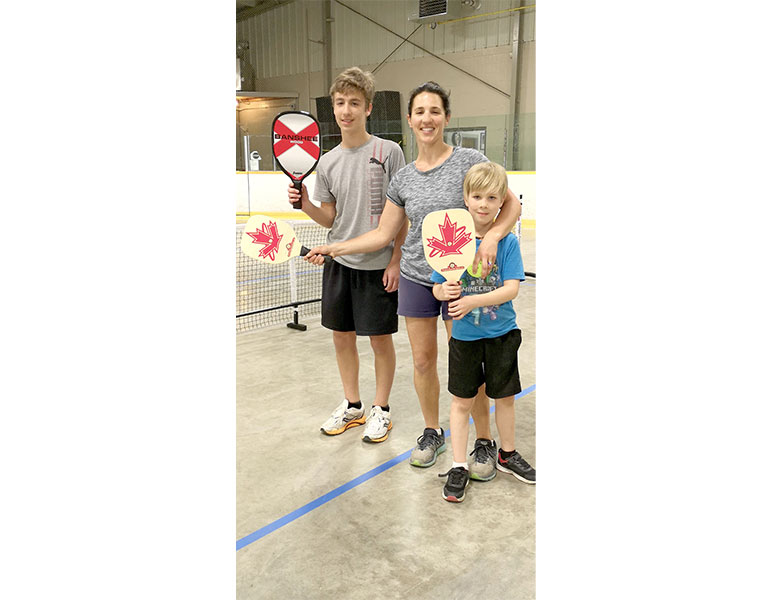 Pick up a paddle - Pickleball is picking up popularity with players of all ages. Terry Ellis enjoys the game with her sons Ryder and Finn. Submitted photos

DRAYTON – Look out basketball, baseball, and volleyball! There’s a new game in town. It’s called pickleball and it is dill-lightful (sorry… I couldn’t resist).

It’s a game played by young, old, and every age in between as was seen on a recent Wednesday evening at the PMD arena in Drayton. Parents, a whole slew of kids and some grandparents came out to enjoy the game.

Pickellball was first invented in 1965 in the U.S. by three fathers with bored kids. It slowly made its way to Canada and is now the country’s fastest-growing sport. People are setting up make-shift courts in driveways, parking lots, and barns across the country.

I even heard that Ellen DeGeneres said she was having a hard time walking because she was playing way too much pickleball.

This game gives you a really good workout and, after 30 minutes of play, you will burn about 40 per cent more calories than you would walking for 30 minutes.

You can start playing this game at any age too.  Even if you’re a senior and haven’t played any sports since high school.  Just remember to not overdo it when you start; increase your playing time gradually.

When you first come out to play, don’t be surprised if most of your ball hits are either missed, sent out of the court, or don’t make it over the net. Remember, you’re playing with a plastic ball that doesn’t bounce as expected and the bat is shorter than you’re likely anticipating.

If you’re “relishing” a try at playing this new game or perhaps you find yourself in a “pickle” for something to do (stop me now), give pickleball a try. No registration required. Just show up wearing comfortable clothes, shoes with good treads (gum rubber soles are the best for indoors), and bring a water bottle with $3 to play.

Mapleton Township and the Seniors Centre for Excellence have supplied bats, balls, nets, and courts. Play happens at the PMD arena on Monday and Friday from 10am until noon (mostly seniors so far) and Wednesdays from 7pm until 8:30pm, with mostly adults and kids, and some seniors.