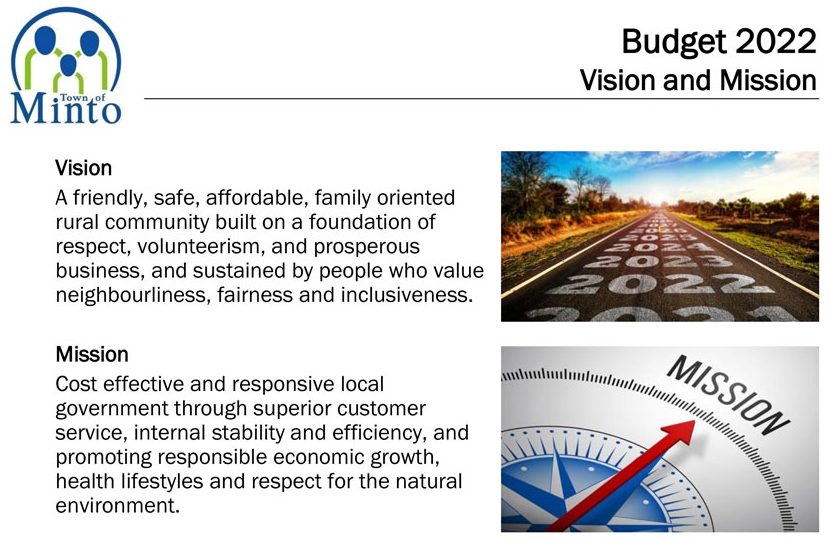 MINTO – A typical taxpayer here can expect a tax increase of around $11 for local municipal purposes in 2022, based on early budget projections.

Minto treasurer Gordon Duff explained at a Nov. 23 budget meeting that current projections in the 2022 draft budget result in a 2.2 increase in the local tax levy (the portion of the budget paid for by local taxation).

Duff is estimating a local tax rate increase of less than one per cent (0.85%), meaning a tax increase of just over $11 based on the average residential home assessment of $242,000.

“We’re very aware that the true value, or resale value, of a single-family home is much more (than $242,000), but with deferred assessment that is the value for MPAC (Municipal Property Assessment Corporation) and for assessment purposes,” Duff noted.

“And as long as everything else is the same too, we can use that figure to estimate the overall taxes.”

As has been the case in recent years, the draft budget projects no increase in school board taxes from the province. A 2% levy increase and 0.91% tax rate increase from the county is projected.

Those figures would add up to a “blended rate” increase of 1.76 per cent, adding less than $24 to a typical tax bill.

“That comes in quite reasonable, especially given the inflationary environment that we seem to find ourselves in for the next few months.”

However, Minto’s projections on county taxation are lower than those in the County of Wellington’s current draft budget.

Minto’s capital budget, which was slated to be discussed at another special meeting on Nov. 30, includes a $2.4-million renovation to the Palmerston arena and community centre property, $2.9 million to replace a clarifier at the Palmerston wastewater treatment facility, $105,000 for industrial development projects in Harriston, and $105,000 for upgrades to Clifford Celebration Square.

“You guys always bring a realistic budget,” he stated.