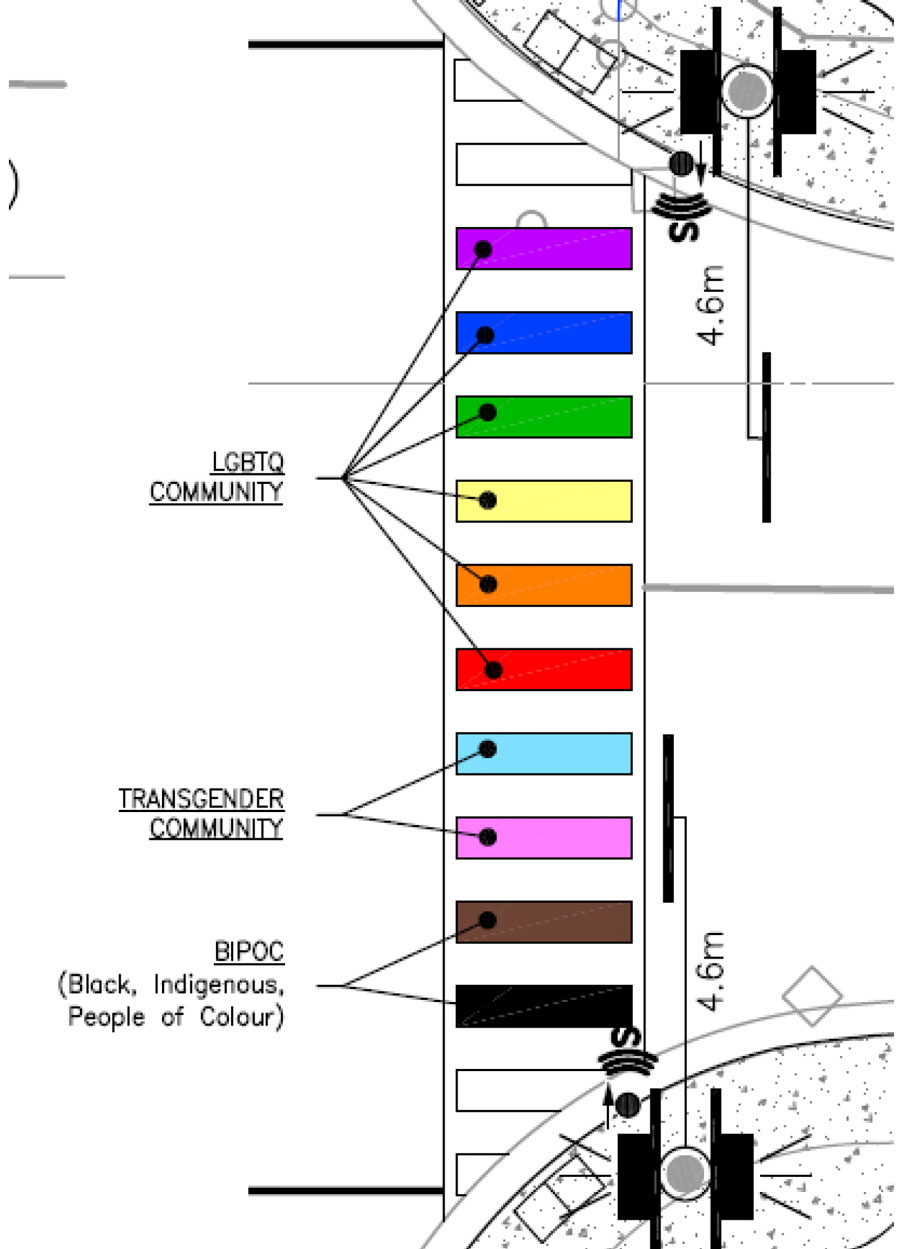 Minto council has approved the installation of a rainbow pedestrian crossover in Harriston. (Council agenda image)

MINTO – Town council has approved the installation of a rainbow pedestrian crossover in Harriston.

Motions approved at the March 1 meeting call for the town to install the crosswalk, while the Minto Pride committee will be responsible for the cost, estimated at $7,000, of specialized painting.

At the March 1 meeting a motion directing staff to proceed with the installation of a Level 2 Type B Pedestrian Crossover at the intersection of Elora Street South and Young Street in Harriston was approved by council.

In a recorded vote, a second motion to proceed with painting the crossover as a pilot project in recognition of the LGBTQ2S+ (Lesbian, Gay, Bisexual, Transgender, Queer or Questioning, and Two-Spirit) and BIPOC (Black, Indigenous and People of Colour) communities with funds raised by Minto Pride was approved.

In April of 2021, council received a letter from a group of concerned citizens requesting additional pedestrian crossover locations in Harriston.

Currently the town has two such crossovers, one on Elora Street and another on Arthur Street, but none in the southern half of the community.

In October of 2021 council directed staff to look at possibilities for rainbow crosswalks in response to a request from Minto Pride, and endorsed by the towns’ cultural roundtable, to install one in each urban centre (Harriston, Palmerston, Clifford).

A staff report presented at the March 1 meeting recommended installation of one crosswalk in Harriston, with funds for the specialized painting to be raised by the committee.

“Staff have done our investigation. And we’re not recommending three, we’re back recommending one in Harriston,” said CAO Derrick Thomson.

“The pilot portion of this report is just that, because there are some unknowns about how long the paint will last and those types of things,” he added.

“We’ll review it at the appropriate time and make further recommendations whether we’ll continue it from a maintenance standpoint or not.”

In a written response to the proposal, the Minto Pride Committee expressed concern about raising the entire $7,000.

“We propose to split the installation cost equally with the Town of Minto, and commit to fundraising $3,500,” committee members stated in the letter.

“The equal financial contribution from the town for the installation would show the support to the LGBTQ2S+ and BIPOC communities, and be a wonderful symbol of working in allyship.

“By splitting the cost of this project, we are also sharing the ownership, and we think the town claiming ownership of this message of equality, inclusion and welcome is important.”

Councillor Ron Elliott asked for clarification on the cost issue.

“I don’t have a problem supporting having a coloured crosswalk. What I may have a problem with is the cost. Are we, by passing this motion, saying that we are going to pay part of it?” he asked.

“So your first motion is to approve the crosswalk,” explained Thomson.

“The second motion is to approve the inclusive-nicity of the crosswalk with that portion being paid by Minto Pride.”