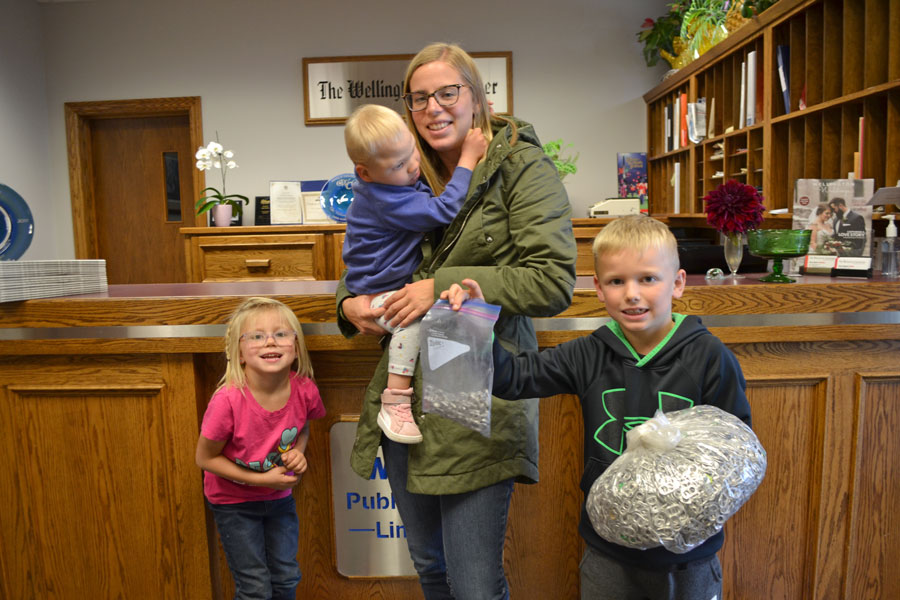 Pop tabs - Seven-year-old Jude VanVeen, right, of Fergus has helped collect five million pop tabs, almost $3,000 worth, to help pay for a wheelchair for his sister Anna, 4, second from left. His initiative, Jude’s Tabs for Anna, ends this month. From left: Kaelyn, 5; Anna, 4; Lorissa and Jude VanVeen stopped by the Advertiser office to receive the newspaper’s tab donation.
Photo by Aryn Strickland

FERGUS – Over the last year seven-year-old Jude VanVeen has been collecting pop tabs to raise money to help buy his four-year-old sister Anna a wheelchair.

Having raised a predicted $3,000, his Jude’s Tabs for Anna initiative is drawing to a close.

Without an official weigh-in, Jude and Anna’s mother Lorissa VanVeen said the family estimates the initiative has accumulated five million pop tabs or approximately 3,500 pounds worth.

“The one quote we received was for 85 cents per pound,” she said, which would work out to approximately $3,000 raised, surpassing the family’s initial target of $2,000.

When the Advertiser spoke to the VanVeens last year Jude’s Tabs for Anna had raised 21,000 tabs, or 15 pounds worth.

Lorissa told the Advertiser the family plans to stop collecting tabs by the end of October.

“We are just bringing in the stragglers and then we are going to bring all of [the tabs] away,” said Lorissa. “We are looking forward to wrapping it up.”

Asked about the end of the campaign, Jude said, “I am not sad, I am happy.”

He said he enjoyed collecting the tabs and “putting them in the big bin, and finding different [coloured tabs] like pink, dark blue, light blue, red ones.”

Anna does not have a wheelchair yet but continues to use a medical stroller.

“We haven’t trialed any wheelchairs yet to figure out which one works best,” said Lorissa. “We have a trust account sitting aside for her so we will have the funds in there.”

However, it won’t be long until Anna will need a wheelchair to start school next year.

“We’ll be looking at it in the new year; we will be ordering her one so that she has it when she starts kindergarten in the fall,” Lorissa said.

“We’re heading into cold and flu season. So it’s always a tough time of a year for her. But she’s going to preschool two mornings a week and she is continuing to develop at her own rate,” said Lorissa.

While provincial funding and charitable donations from Easter Seals will cover some of the cost of the wheelchair, Jude VanVeen and his parents started the pop tab campaign in September 2018 to raise the difference, expected to be about $2,000.

Having surpassed their initial target, Lorissa VanVeen explained any additional funding will remain in Anna’s trust and used for other medical devices they anticipate she will need as she continues to grow.

When the initiative started last September, it quickly spread with schools as far as Manitoba and Alberta raising pop tabs for Jude and Anna.