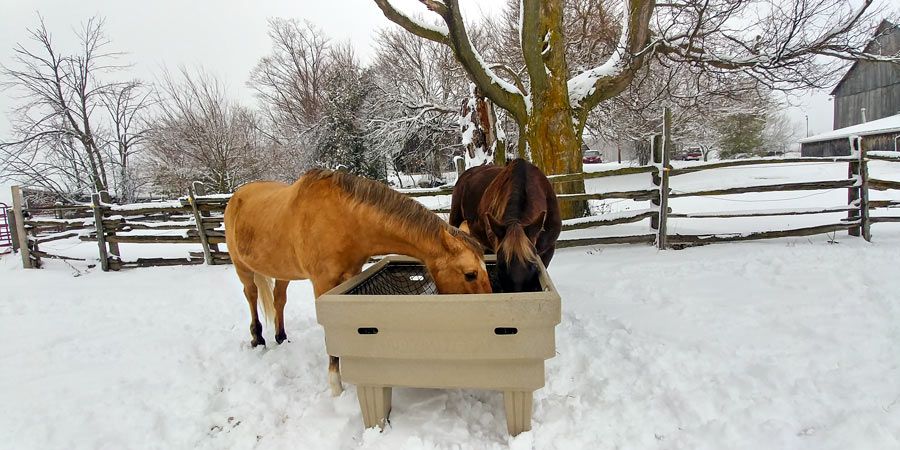 Hay there - Two local residents have invented the Hay OptMizer, a feeding device for horses they say will save time and money.
Submitted photo

PUSLINCH – Two local residents have invented a feeding device for horses that just may revolutionize the way horses are fed.

It certainly will save time and money for those who opt in, says Sue Wilson, co-inventor of the Hay OptiMizer that launched in December.

“Most people will feed their horses two to four times a day,” she said in a phone interview. “So you portion it out. But the horses typically gobble it up all at once and then just hang around waiting for the next feed.

“With a slow feeder, they meter themselves. They feed less often and can get through a cold night.”

The Hay OptiMizer has two main features – a four-foot by four-foot bin that can hold two bales of hay, and netting that stretches over the hay forcing horses to slow their eating. They get what they need and don’t over-eat, Wilson said.

“Last winter I had eight horses and would use 200 pounds of hay per day. I would fill 10 bags with hay and hang them outside. It took about an hour,” Wilson said.

“With this, I put the hay on a toboggan, pull it out and fill the feeders. All the feeding is done in minutes.”

Typical tombstone feeders are good for containing the hay, but horses can gorge on it, she said.

“And the waste. Once hay is on the ground, they don’t want to eat it. With some feeders you can waste up to 50 per cent,” she said. “With our feeders there is virtually no waste.”

Wilson took her idea to Matthew Bulmer, who has a barn in Puslinch where she boards her horses. Bulmer is the owner of Corwhin Hills Farms, a Puslinch councillor, and a man with an engineering background who likes to tinker in his shop.

“He’s a hay person, I’m a horse person, so we collaborated,” Wilson said. “And even though he’s blind, he did all the engineering.”

Wilson said they created and tried out a few prototypes, each one better than the one before. And now they think they have a winner. Certainly, their customers seem to like it.

“The barn where I board my horses started using them,” said Wendy Wood, a farrier in Fergus who has three horses. “I was shocked with how much hay is saved. There’s virtually no waste.”

Wood said she’s used other kinds of feeders and while they each have positive features, they all have drawbacks.

“With raised hay feeders, the hay blows in their eyes and their eyes become goopy,” she said.

“Bales with nets are just set on the ground and they can become gross and there’s a lot of waste. And hanging nets take so long to fill. With the hay OptiMizer, it’s a five minute thing.”

“I get so much joy hearing the stories,” Wilson said.