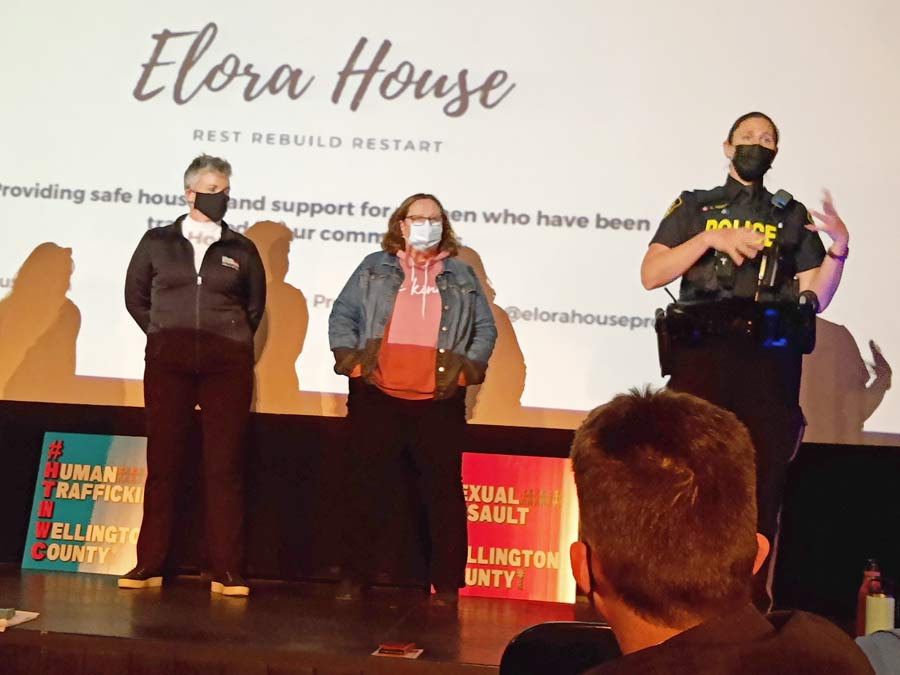 From left: Sarah Bowers-Peter, Liz Kent, and Beth Hickey talked to a gathering at the Gorge Cinema on Oct. 19 about human trafficking in Wellington County. Photo by Joanne Shuttleworth

ELORA – It’s not for no reason there’s a residential facility in the area to help women and girls who have escaped human trafficking.

“We have kids in Wellington County who are being groomed right now,” said Sarah Bowers-Peter, program coordinator for Crime Stoppers Guelph Wellington.

“Not talking about it is actually allowing it to flourish.”

Bowers-Peter was speaking at an information session about human trafficking on Oct. 19 at the Gorge Cinema in Elora.

She was one of the guest speakers, along with OPP Constable Beth Hickey and Victim Services Wellington executive director Liz Kent.

The event was hosted by Elora House, the residential facility for victims of human trafficking that opened in 2020, and Barbara Lustgarten-Evoy, a member the organizing committee, who spoke on the facility’s behalf.

Attendees – many well-heeled and connected local citizens – were invited to use their networks to spread the word and build awareness about human trafficking.

Human trafficking does not just happen in other countries. Nor is it just an urban issue.

It’s here in Wellington County and traffickers are using social media to make inroads mainly with young girls, to win their trust and then exploit it, either pimping out the girls or using them to make pornography, the speakers said.

“Traffickers know how to speak to youth,” Hickey said. “They find vulnerabilities and really latch on to that.”

Girls are won over with expensive gifts, they believe they are in a relationship and become loyal to their trafficker/boyfriend, and are often in precarious situations before they realize what has happened.

Hickey said the OPP received some funding from the Solicitor General and partnered with Victim Services and Crime Stoppers on a project they call Human Trafficking in Wellington County (HTINWC).

“The focus is to support survivors and victims of trafficking and sexual assault,” she said. 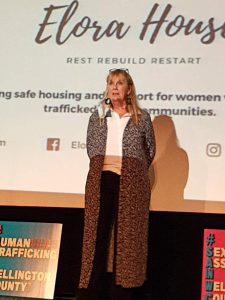 The funds have been used to train police officers in a trauma-informed approach, so victims who come forward are not re-traumatized by the legal and judicial system.

The group is also focused on raising public awareness about the problem and to drive home the fact that Wellington County is not immune just because it is a rural community or “small town”.

“With online everything these days, traffickers have quite a network,” Hickey said.

“Recruitment is happening in rural communities and Highway 401 is a pipeline for human trafficking.”

Kent said 20 years ago, when she started working for Victim Services, domestic violence was the dominant threat. Now human trafficking is gaining a foothold.

“We have seen families pimping out their children. We have seen victims from all walks of life.”

It’s also an industry constantly on the move – from hotel to Airbnb to residences; from city to town to another city.

That makes it hard to get accurate numbers, hard to make arrests, and hard to find the missing girls.

The three agencies do a lot of public speaking on the topic – to parents, to teens, to children and community groups – and a lot of the prevention efforts have to do with being safe on social media.

Bowers-Peter said it’s shocking the number of 12 and 13-year-old girls who are asked to send nude photos of themselves to social media “friends” or who receive unsolicited risqué photos on their own phones.

“You should assume your child is being groomed,” she said.

Megan Baron, case management coordinator at Elora House, said their clients range from 15 to 52 and the house has been full since it opened.

There is already a need for a second home and organizers are planning a fundraising campaign for some time next year.

In the meantime the speakers offered a list of signs to look for that could indicate your child is being groomed or is already involved in human trafficking:

These signs can mean a lot of things and are worth checking out, the speakers said.

“We want to get the word to schools, to girl guides, to hockey teams, dance groups, hotels, Airbnbs – to everyone,” Lustgarten-Evoy said.