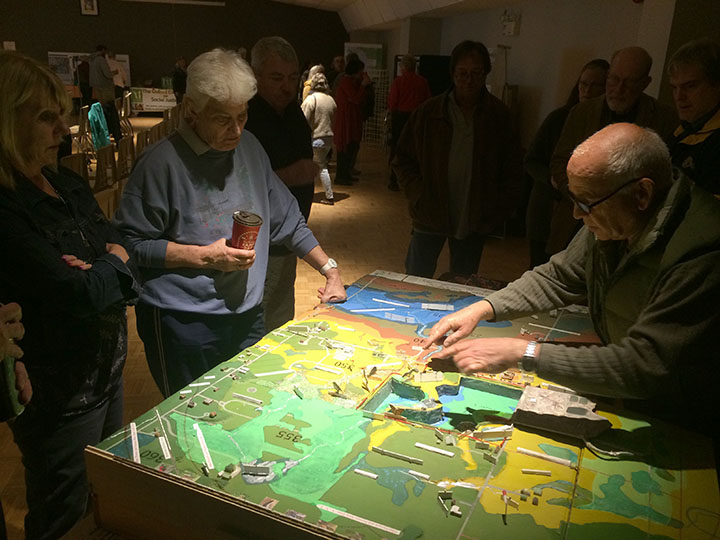 Hidden Quarry 3D - Participants at the People’s Aggregate Summit at the Aberfoyle Community Centre on May 28 had the opportunity to get a bird’s eye view of how members of the Concerned Residents Coalition view the impact of the “Hidden Quarry” project near Rockwood. Photo by Mike Robinson

ABERFOYLE – Speakers at an event here consider recent government policies regarding gravel extraction to be the pits.

The People’s Aggregate Summit at the Puslinch Community Centre on May 28 was a response to an industry summit last March, from which organizers felt they were excluded.

The night involved three guest speakers providing information on proposals being lobbied for by the aggregate industry and the potential impacts.

Ian McLaurin from the Ontario Soils Regulation Task Force (OSRTF) spoke about what he called the increasing risk that pits and quarries across Ontario will become the preferred dumping ground for “excess soils.”

Franco DiGiovanni, an air quality expert from the Hemmera Environmental Consultancy, discussed the importance of evaluating the quality of technical work done in support of aggregate proposals.

Gravel Watch Ontario president Graham Flint  stated the event “is really a reaction” to an event the Ministry of Natural Resources and Forest held in March.

“It was an industry aggregate forum and they went to great lengths to exclude voices other than the industry from the event,” said Flint said. “We were told that we were not the target audience although we could attend the event.”

He contended organizers of the industry forum did not even reveal the location to those invited until roughly 48 hours before the event.

Flint said while the focus of the previous forum was to look at ways to facilitate the aggregate industry, “What this room brings is the counterbalance.

“We all know we need stone, sand and gravel to build our high quality of life in Ontario. But we have to do it in a responsible way which takes into account the impacts it has on both the environment and communities which host these situations.”

Flint said everyone was invited to the People’s Aggregate Summit “although we did not go out and specifically target [the industry]. They were not excluded.”

Flint said the meeting was held in Puslinch because “There is an awful lot of aggregate resources in this area and the community is dealing with.

“This is where Gravel Watch Ontario was founded and it is kind of our home base.”

Flint said the meeting also involves a call to action, to get participants to attend a June 8 event at Wilfrid Laurier University, sponsored by Environmental Defense, which is bringing in a coalition of environmental groups from across the province.