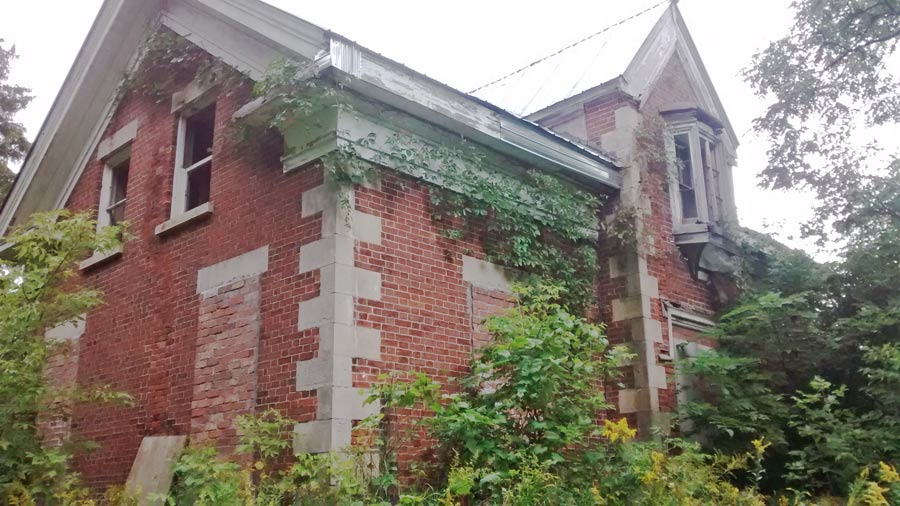 Homestead Farm - This pre-Confederation farmhouse has been the target of vandals.
Submitted photo

HILLSBURGH – The Town of Erin heritage committee is asking council to put a heritage designation on Hillsburgh’s oldest pre-Confederation brick farmhouse, which would block an application for demolition.

The Nodwell family farmhouse, built in 1864, was purchased in 2003 by developer Manuel Tavares as part of a 131-acre tract of land known as Homestead Farm on Trafalgar Road, now designated for a new subdivision just east of Hillsburgh.

At a July 22 meeting, the heritage committee voted unanimously to request that town council pass a bylaw to designate the building under the Ontario Heritage Act, due to its “cultural heritage value”.

The previous town council, including three members of the current council, approved a demolition permit for the building in 2015. The permit expired after one year, and the owner is now applying for a new one.

Since the building is of historical interest, the heritage committee has an opportunity to request its preservation.

“It would be a shame to let this building go when other municipalities seem to want to put forth efforts to save their heritage buildings,” said town councillor Jamie Cheyne, co-chair of the committee.“Yes, the building is probably gutted to the bricks, but it seems sturdy.

“The library was taken back to its barest of form before it was given its wonderful new life,” he said, referring to the award-winning project to include a heritage house in the architecture of the new Hillsburgh library.

The committee did not request a formal heritage designation for the Nodwell house in 2015, but suggested the land immediately surrounding it be severed and rezoned, so its architecture could be restored as an independent project.

Dwayne Wilson, on behalf of Tavares, told council in 2015 that in spite of efforts to protect the house, including a new roof and bricking up the doors and windows, it had become a serious safety problem and a target for vandals.

The housing subdivision in the area has been on hold for about 16 years, pending development of a wastewater system.

County councillor Jeff Duncan, also co-chair of the committee, opposed the demolition permit in 2015 when he was a member of town council.

“It is an important part of Hillsburgh’s history; the only example of this house style and one of very few homes of this age,” he said at that time.

This is the first time since 2007 the committee has opposed a demolition request and only the second time since it was established in 2003, said Duncan.

The heritage committee passed a second resolution, making other requests of council if it does approve the demolition.

They want to have a professional heritage salvage company remove materials of value before demolition, and have the opportunity to visit the house and take photos and videos.

It has asked that once the lands have been developed for housing, one of the roads be named after the Nodwells.

The committee hopes an interpretive area can be created in a park or open space to outline the Nodwell family history and the importance of Homestead Farm to the community.

The Nodwell family was prominent in Hillsburgh after arriving from Ireland in 1838. As prosperous farmers, they built the village’s first stately brick house in 1864. It is in the gothic revival style, with unique features of cut limestone.

The Nodwells were known for breeding short-horn cattle in the 1890s. Family members were leaders at St. Andrew’s Church, and Robert D. Nodwell was president of the Hillsburgh branch of the Upper Canada Bible Society.

His son, Lieutenant William E. Nodwell of the 30th Wellington Rifles, was a recruiter during the First World War. Robert C. Nodwell’s wife was active with the Hillsburgh Women’s Institute.

Dr. R.J. Nodwell served in the Medical Corps in the Second World War, was appointed Deputy Director General of Medical Services for the Army in 1953 and Medical Director of Toronto Western Hospital in 1960.

In a 2009 collection called Shades of the Past, Hillsburgh native Francis Gray Currie wrote that Mungo and Lillian Nodwell created a social hub for the community at Homestead Farm.

They grew seed potatoes, working the land with horses from 1926 into the 1950s, had a large dairy herd and delivered milk door-to-door by horse and wagon. Lillian was known for her art and her cooking.

The “great room” had a massive harvest plank table that could seat 12, a huge stone fireplace and almost floor-to-ceiling windows, making it “the heart and soul of the farm”.

Erin Advocate columnist Joyce Graham wrote about the end of an era when Mungo’s daughter Nina Nodwell and Les Richards moved to Markdale after selling the farm to Manuel Tavares.

They had raised sheep since 1985 and operated Hillsburgh WoolWorks.