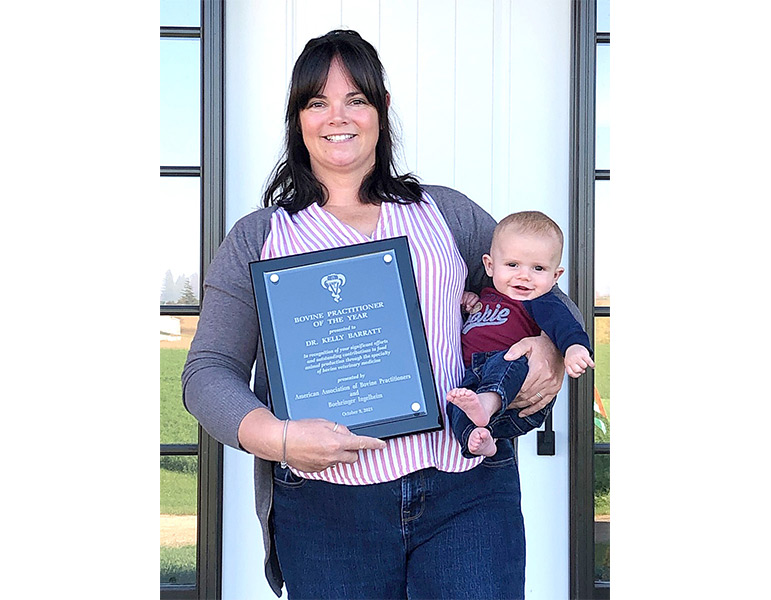 LISTOWEL – A local large animal veterinarian made history within the American Association of Bovine Practitioners (AABP) organization earlier this month, becoming the first woman and the youngest in her field to ever receive its most prestigious award.

Dr. Kelly Barratt of Heartland Animal Hospital and Veterinary Services, based in Listowel, Drayton and Mount Forest, had no idea what was in store for her when she attended the farm of friends, clients and neighbours, Carman and Beth-Ann Weppler, at their request on Sept. 24. Believing it to be a routine call, Barratt was greeted by members of her family, Heartland colleagues and clients, all waiting to share with her the news that she had received the AABP’s top honour in being named 2021 Bovine Practitioner of the Year.

“It was a complete shock. I was completely humbled to receive this award.”

The award honours a practicing veterinarian who is active in organized veterinary medicine and has made significant contributions to bovine medicine. It is typically announced in person at the AABP’s annual conference – this year held in Salt Lake City, Utah on Oct. 7-9 – but with border restrictions associated with the pandemic in place, Barratt was informed ahead of time and made her acceptance speech in front of family, friends and colleagues gathered at the Weppler farm. Her speech was recorded and played at the conference. 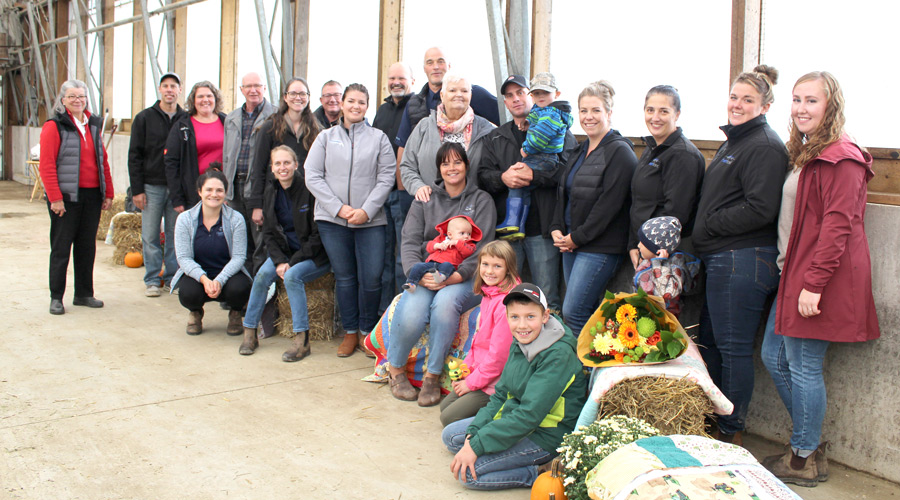 She was nominated for the award by Dr. Ann Godkin, Maria Leal, Dr. Rod Wieringa, Emily Den Haan and the Weppler family, the latter being rounded out by their children and two of Barratt’s biggest fans, Lachlan and Rea.

“I am incredibly thankful for my partner, Adam, my boys Noah and Archie, and my family who have supported me through thick and thin; my Heartland Vets family and clients who have been with me for the past 16-plus years and the many mentors who have encouraged and inspired me,” said Barratt, a southern Grey County resident. “I am so humbled to have been recognized by my peers, clients and colleagues for my contributions to bovine veterinary medicine.”

Barratt graduated from the Ontario Veterinary College (OVC) in 2005 and joined Heartland following school, ultimately becoming a partner in the business in 2010. She specializes in dairy herd health and works with the Dairy Farmers of Ontario as a quality assurance program consultant for the proAction program and other Canadian dairy industry-related projects.

A member of the AABP since her days as a veterinary student at the OVC, Barratt was awarded a ‘Top 40 Under 40’ in Agriculture for North America by Vance Publishing in 2014, and the Ontario Association of Bovine Practitioners Award of Excellence in 2017.

She added she hasn’t sought out awards since entering her field 16 years ago, and she would have never accomplished all she has without support from her colleagues.

“It takes a village, and I just happened to be in the right place at the right time,” said Barratt. “It’s just knowing the right people and getting the right opportunities. I think it’s not something that I could have ever achieved on my own – there are so many other people I get to work with who have helped me be as successful as I am.

“I would say coming to Heartland was a big part of that, it being such a progressive practice with such great clients and such wonderful partners that allowed me to take risks and join committees and work on projects that may not have fallen inside the regular realm of a dairy vet.”