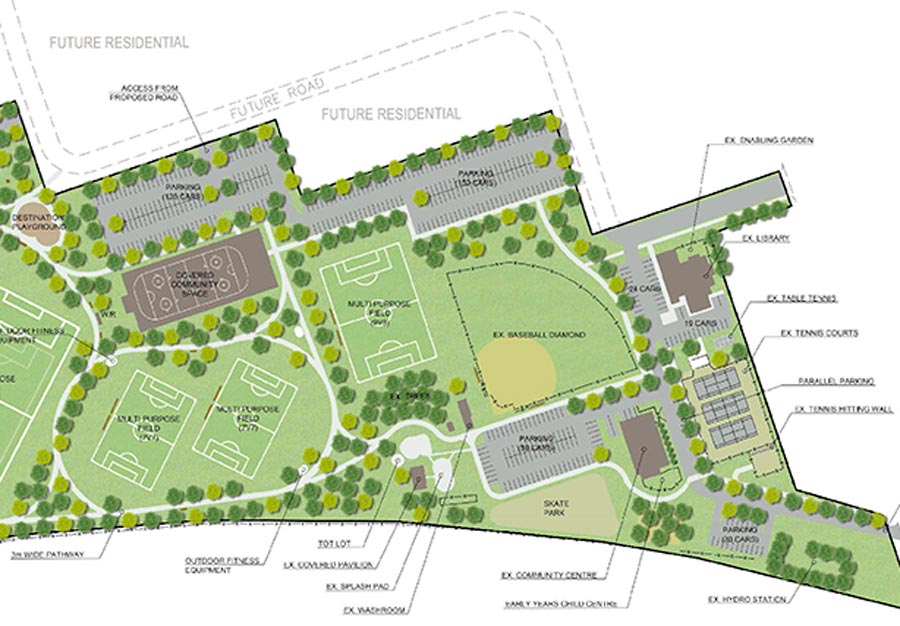 A conceptual drawing in the existing Rockmosa Park Master Plan shows an area to the left prepared for a new covered community facility. To the right are the existing library and community centre. The proposed facility is larger than the currently allotted space, so if it proceeds, the park layout will be adjusted.
Submitted photos

BRUCEDALE – Guelph-Eramosa has spruced up its plan to build a “multi-generational” recreation complex at Rockmosa Park, including an ice pad, in hopes of getting a $10.4-million cash infusion from the federal and provincial governments.

Parks and recreation director Robin Milne presented the proposal to council on Oct. 21 and was authorized to apply for funding under the Investing in Canada Infrastructure Program (ICIP).

The total cost of the Rockmosa Multi-Generational Recreation Complex is estimated at $14.2 million, with 40% provided by the federal government, 33.33% by the provincial government and 26.67% ($3.8 million) by the municipality.

If the project proceeds, it would consolidate local recreation services in one location and provide the municipality with its first ice surface.

“This is fantastic for our community, something we could never afford without a grant – these don’t come along very often,” said Mayor Chris White.

“It fits perfectly in with the park.”

Many municipalities will be applying for ICIP funding, originally announced in March 2018.

The federal government is providing about $407 million, with $320 million from the province. Grant applications were accepted starting in September.

“I am feeling confident that we sit in a really good position for the grant,” said Milne, who coordinated development of a business plan for the project.

Guelph-Eramosa would fund its share with a capital naming opportunity ($500,000), increased development charge revenue due to new recreation services  ($300,000), revenue from surplus property (almost $2 million) and new debt of $1 million.

The current proposal is for a 47,300 square foot facility designed to handle activities for older adults and youth, with a multi-purpose court for basketball and pickleball, a 90-metre indoor walking track, programming space, social interactive spaces and an NHL-sized indoor ice surface (200 by 85ft), with change rooms, washrooms and storage space. 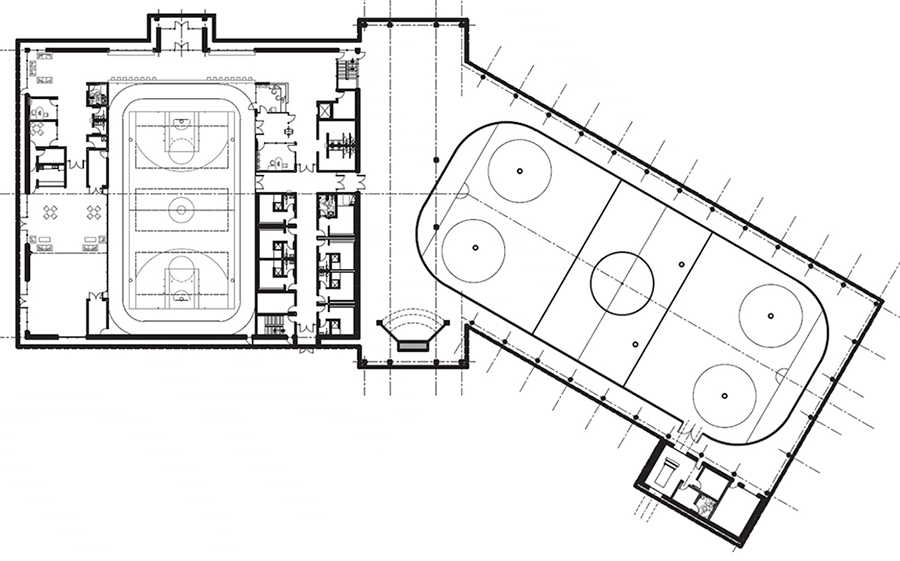 The proposed layout of the new facility.

The facility, which would be built to allow future expansion, could also serve as a community emergency centre if needed.

Milne said he has tried to estimate high on costs and low on revenue, noting deficits are common in the operation of recreation services.

He added that once a debenture for the Royal Distributing Athletic Performance Centre (indoor sports field) in Marden is paid off next year, that facility will operate at a surplus.

A new recreation complex in Rockwood has been part of township development charges studies since 2004. It is part of the Rockmosa Park Master Plan, which has land set aside for a covered recreation facility.

Elements of the plan already completed include stormwater management, resurfacing the entrance, and construction of the skate park, the trail, the toboggan hill and 50% of planned parking lots.

Still unfunded, along with the covered recreation facility, are a destination playground, exercise stations, a tot lot playground designed for kids aged two to five and sports field lighting.