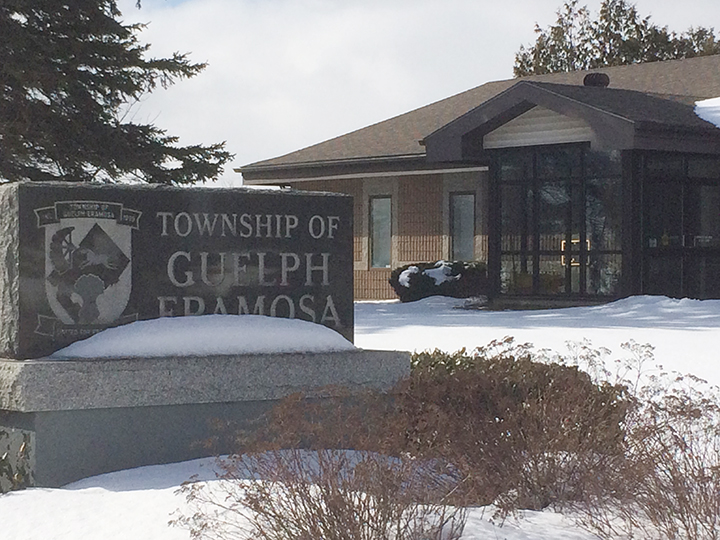 BRUCEDALE – Guelph-Eramosa is setting the stage for a new 60,000 square foot facility on Wellington Road 86, north of Guelph.

On March 9 council agreed to delegate authority to chief building official Dan Sharina to approve an agreement for a conditional permit for Ceva Animal Health Inc.

The conditional permit relates to construction of a foundation for the project located at 5410 Wellington Road 86, north of Malcolm Road.

In his report to council Sharina said the property owners intend to construct a new 60,000ft² manufacturing facility to produce coccidiosis vaccines for poultry.

Sharina pointed out the conditional approval is only for the building foundation. He noted that on Jan. 30, an incomplete permit application with drawings was submitted to the building department for review.

Through preliminary review, it was determined planning approvals and other requirements were not submitted.

Sharina added the site plan agreement is currently being finalized and other applicable laws are awaiting submission and/or approval. He stated no building permits will be issued until all approvals have been submitted.

However, he added council has the authority to enter into an agreement with the applicant for a conditional building permit for the foundation portion of the project, providing the property owner/applicant complies with the Building Code Act.

Sharina noted the applicants are eager to start construction and have set timelines with their contractors.

Legal costs associated with the conditional building permit will be covered by the owner/applicant.

Sharina said right now the applicant is still working on getting some of the approvals.

“The Act does allow this, provided the applicant complies with some of the conditions of the agreement. It also states there can be no risk to the municipality as a result of the construction,” Sharina said,

He noted there will be timelines tied to obtaining the missing approvals and if not met, the proponent could be required to remove the building and restore the property to the manner specified in the agreement.

“This is to protect the municipality in case the applicant does not get all of the approvals,” Sharina explained.

He noted the township has allowed conditional permits in the past, but, “This is a little bit different.”

Councillor Corey Woods noted other aspects of this project will still need to come before council.

White added “to be clear, this company is up and running in the City of Guelph, right on the border of Guelph-Eramosa. This company has a lot of potential.”

White said the main difference with this project is the size and the interaction with the city and various government agencies.

“At the end of the day, it’s pretty simple. This conditional permit is to get the foundation in – not the whole building – it’s just to get things moving forward.”

White added, “I’m certain you’ll be coming back to us down the road. Knowing Dan, all this stuff will end up being legal, compliant and above board.”

He added, “We are looking at the scenario of this being a huge international company with a global footprint.”

White pointed out, “This will create jobs and is farm-related. It doesn’t get any better than this.”

Councillor Bruce Dickieson asked if there is anything that requires a zoning change as the property is still zoned agricultural.

CAO Ian Roger noted the operation is a permitted use under the township’s agricultural policies.

Council subsequently approved delegating approval of a conditional building permit for the foundation only.

In later discussion, White said Ceva has been in Guelph for some time. Roger said the local operation  was a startup by a University of Guelph professor, which was bought out by Ceva for production of the vaccine.

White noted the company is now expanding and Roger added this company is the world source for this vaccine.

“It will be used by the EU and they’ll be producing it for the entire world,” said Roger.

Noting the facility will be closer to 80,000ft² including the second floor, White said, “It’s a big deal and there is lots of opportunity for expansion and jobs.”

He added, “It is good for the city, and it’s good for us. And any time one has a world class facility supplying the world, you can attract other such businesses.”